On the St. Lawrence River winter gets shorter every year. The one that’s just over was the first in which there was regular navigation as far in from the Gulf as Three Rivers, Que. Quebec City is becoming a steadily busier winter port. Montreal’s inner harbor was opened in mid-March. Mostly, this has been because of improved ship design—more and more owners are building their vessels tough enough to chug through river ice. The next breakthroughs will likely come as man learns more about how to control the ice itself.

Late this winter a group of men from a Montreal engineering firm named Aero-Hydraulics, with the co-operation of the St. Lawrence Seaway Authority and an observer from the National Research Council, completed an experiment that may point the way to one of those breakthroughs.

First, they chopped a series of holes, fifteen inches wide and a hundred feet apart, through the thirty-inch ice

of the St. Lambert lock. Into each they lowered a strange-looking device, a polyethylene pipe, a foot across and twelve feet long. To each pipe, they attached a hose from an air compressor.

Five days later, the holes they had chopped had spread to twenty-five feet in diameter, and the ice at the edges was noticeably mushier.

What melted the ice, of course, was warmer water from near the bottom of the lock (water reaches its maximum density at 39.2 degree F). The pipes, or “guns” as the Aero-Hydraulics people call them, burp out their supply of condensed air so as to create a kind of up-draft in the water. This principle is not new in the world of ice-prevention. At least one firm, Atlas Copco, has been dealing in what it calls “bubbles” for several years now. “Bubbles” are sections of porous pipe from which condensed air forces out myriads of tiny bubbles. The aero-hydraulic gun, by contrast, shoots out just one bubble

every 3Vz seconds. As a bubble comes out the top of the pipe, another is formed at the bottom, and the effect is what engineers call an expendable piston. One gun can lift three million gallons of water a day to the surface.

Does this mean the St. Lawrence Seaway is about to be opened all year? Not in the near future, anyway. If for no other reason, there’s just too much political pressure from the Maritimes, which rely heavily on winter traffic to their ports. Could it be done? The engineers who developed the new gun think it could. They maintain that as few as perhaps a thousand of their guns installed in Lake Ontario could keep the water moving into the Seaway warm enough to prevent ice formation.

Meanwhile, some of the new guns, like the older “bubblers,” are being installed at a few loading docks in Canada, so that ships can be moved around in winter and be loaded and ready to go at breakup. PETER GZOWSKI 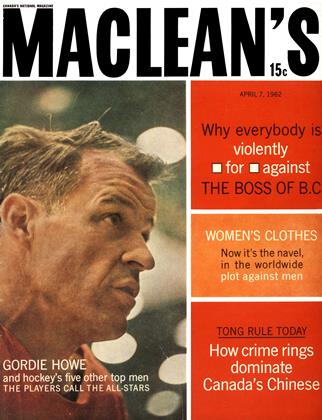