FIVE YOUNG MEN THE WORLD WILL HEAR MORE OF

THERE ARE SIGNS THAT CANADA has a new school of musicians good enough to meet the highest international standards. Five of the signs are the young men on these pages; three are pianists, two are conductors and none ever sings for strangers. For several years, Canadian singers, particularly women singers, have been proving themselves as good as the best in concert halls around the world; but in almost every other field of serious music, Canada has done about as well as she does in Olympic fencing.

The new wave that promises to change this — represented here by pianists Ronald Turini, Marek Jablonski and Richard Gresko, and by conductors Zubin Mehta and Boris Brott — is itself largely a legacy from other parts of the world. Four are sons of immigrants, and three are sons of one or two professional musicians. All of them, in one way or another, showed some astonishing musical talent about the time most children quit playing with blocks. All are approaching the time

THE NEW WAVE IN CANADIAN MUSIC

CONTINUED they’ll try to step into the company of men with reputations like Glenn Gould.

But, among the pianists at least, the differences are more significant than the similarities, and the differences lie chiefly in their approach to music. Gresko, the youngest of the three, is surprisingly, the most obviously powerful; he plays like constant thunder. Jablonski is the most romantic, a Chopin specialist. Turini is the most polished, a perfectionist who’s strong on heroic music. He’s twentyseven and the closest of the three to the kind of international recognition they want.

Recognition is already coming to Zubin Mehta faster than he can handle it ("1 have no free time till 1966”). The son of the former conductor of the Bombay Symphony Orchestra, Mehta, at twenty-six, is conductor of the Montreal Symphony. He’s touring Russia now with the MSO and pianist Turini. and during what’s left of the year he’ll act as music director for the Los Angeles Philharmonic; conduct orchestras in Tel Aviv, Buenos Aires, London, Vienna and Florence; and make recordings in Berlin. Walter Joachim, first cellist in the MSO, who admits he’s twice as old as Mehta, says the young Indian is humorous at rehearsals, demanding and “thoroughly mature.” Pianist Jablonski says it’s inevitable that Mehta will be accepted as one of the world’s great conductors. Mehta is married to Carmen Lasky, a Saskatchewan girl he met while studying in Vienna. She was studying singing.

MAREK .IAIU.ONSKI LIKES choimn—not, he says, because Chopin's works are popular, but because “they just come natural.” Jablonski, like the composer, was born in Poland and, in fact, he even looks like Chopin; his management pairs the Jablonski and Chopin profiles on their programs. Of all the young pianists, Jablonski, at twenty-three, probably has the most appeal on stage. (“Give me a decent concert grand and I'll take on an audience of rock-’n’-rollers — maybe even twisters.”) His style is thoroughly romantic and he worries that his smallish hands may always prevent him from playing with the sure abandon of the pianist he admires most, Artur Rubinstein. But there’s nothing small about Jablonski’s talent. At four he was playing mazurkas and polonaises and two years later his mother enrolled him in the Cracow Conservatory. In 1957 — eight years after the Jablonskis arrived in Edmonton — Marek won a prize entitling him

to a summer study in Denver where he met one of the world’s most revered piano teachers — Rosina Lhevine. This was his first, and in some ways his biggest, break; at Mme. Lhevine’s invitation, and with the help of some Edmonton businessmen he’s been studying under her ever since at the Juilliard School in New York. His second big break was winning top honors last year in Jeunesse Musicale’s first national music competition. The prize was the grueling kind of concert schedule that turns talented amateurs into tough pros. Jablonski’s still on it. He’s already been compared to Glenn Gould. He's proved he can play expertly some of Chopin’s most difficult leaps and runs, music many more experienced performers cautiously avoid. And even a pianist’s severest critics — the musicians in the orchestra — lauded his recent performances of Chopin’s E Minor Concerto and Beethoven’s Third. In short, Jablonski would seem to have it made. But he’s taking no chances; he’s studying for a degree in science because “if I ever get a chance at Carnegie Hall I want to walk out there with the feeling that it doesn't really matter.”

OF CANADAS NEW YOUNG IMANO virtuosos, the oldest and easily most acclaimed is Ronald Turini, twenty-seven; no Canadian pianist since Glenn Gould has attracted more international respect than this shy, intense Montrealer. He's only the second student ever accepted by Vladimir Horowitz (the first was the brilliant young American, Byron Janis) and some critics have complained that Turini has mastered Horowitz' musical mannerisms all too well, that he's superb when the music calls for an heroic approach but somewhat impersonal if the work is introspective. But, no matter what's on the program, Turini's playing is always extraordinary for its technical perfection, its unruffled control and unfailing sense of rhythm. His musical education began when he was four, after his Danish mother noticed that he was fascinated by music played on the family's new record player. Twenty-three years later, he's being billed as "the most exciting personality to arrive on the North American musical scene in recent seasons," and his C arnegie Hall concert last spring was probably the most important debut of the season. Certainly, it was important for Turini; it immediately inspired invitations from major U. S. orchestras and a Canada Council grant to help finance a Canadian tour. Turini is already well known in Europe; he has won top honors in at least one major European festival and in 1960 he placed second in the Queen Elizabeth of Belgium competition, probably the world’s toughest piano contest. He’s back in Europe now on a concert tour which is probably the most important of his life: he's touring Russia with the Montreal Symphony and may give separate recitals in western European cities. If the Russians like Turini as much as they liked the American, Van Cliburn. a few; years ago — and some critics think they will — then Ronald Turini will have arrived publicly in the small circle of the world's best piano players.

“DADDY, THE DIE IS CAST,” said Boris Brott. “I’m going to be a conductor.” He was talking from Mexico City. Alexander Brott boarded a plane in Montreal and arrived in time to see his son conduct the full National Symphony Orchestra of Mexico. Boris was fourteen. Until he cast the die in Mexico he might have been almost anything — as long as it involved music. His parents were both professional musicians, his father a violinist, his mother a cellist. He'd been playing the violin almost as long as he'd been talking; he’d played the piano for years; he’d already blown his way — on the French horn — through the Quebec provincial conservatoire and earned honor marks. Then, the Mexican government offered him a scholarship to study conducting under Igor Markevitch in the Pan-American conducting course. Boris finished second in a field of thirty-three but his real reward was his time on the podium before Mexico’s national orchestra. Now, he’s traveling as an understudy to one of the world's greatest living conductors, eighty-seven-yearold Pierre Monteux, and, in Italy, the eighteenyear-old’s recent reading of Tchaikovsky’s fourth symphony, with the Milan Radio Orchestra, attracted serious attention. Brott has an incredible memory and may never have to use a score to conduct. At fourteen, he memorized six Beethoven symphonies in six weeks and in the past few months with Monteux he’s memorized twelve more full orchestral works. But, as well as memory and a fine ear, Brott’s got energy: a couple of years ago he raided the McGill Conservatorium and the conservatoire to put together a scratch youth orchestra which won top honors in everything it tried at the Ottawa Music Festival (though some losers grumbled that Brott's group included a couple of ringers — from professional orchestras.) But a conductor needs more than an ear, a memory and organizing ability. He has to know how to establish a vital rapport with the musicians and Brott’s first real test came in one of the Dominion Concerts Under the Stars when he was only sixteen; he had to create that rapport with members of the Montreal Symphony Orchestra. with musicians who remembered another Boris — in a crib, backstage, while his parents played in the orchestra. Apparently, he succeeded. The musicians say they forgot Boris the baby in ten minutes, and began playing for a conductor whose musical ideas had to be taken seriously.

WHEN RICHARD GRESKO was sixteen an argument with a conductor four times his age almost scuttled an entire concert. Gresko told Wilfrid Pelletier at a rehearsal that he, Richard Gresko. would play Tchaikovsky’s first piano concerto his way, at his pace — somewhat faster than Pelletier’s. "Young man,” Pelletier is supposed to have said, “you’ll have to grow some hair on your chest before you try to instruct me.” ‘i've got hair on my chest,” Gresko said, and Pelletier walked out. The concert did take place the next night, as scheduled, and it’s not clear now who really won the argument, but the story indicates something of the conviction this young Montrealer — now a mellow nineteen — brings to everything he plays. He still approaches the piano like a man with a hairy chest; he seems to pummel the keyboard, and the music he makes is remarkable for its strong rhythmic structure and a kind of controlled violence. “Even I would not begin with such

a tempo,” a judge remarked at one competition when he first heard Gresko tear into Prokofiev's finger-breaking Toccata. (Gresko won first prize — “with great distinction.”) When he was two, his parents (father, violinist; mother, pianist) noticed he was able to call out the notes in the sound of sirens and train whistles; at six, he was playing Mozart sonatas; at sixteen, he had performed with orchestra the Mozart Coronation Concerto, Saint-Saëns G Minor Concerto and the Tchaikovsky first. Now — like Marek Jablonski — Gresko is studying under Rosina Lhevine at the Juilliard School in New York. He’s there by the grace of an invitation from Mme. Lhevine, a scholarship and a small grant from the Canada Council. He hopes to land a bigger Council grant this year so he can accept another invitation from another much soughtafter piano teacher; pianist Wilhelm Kempff has asked Gresko to join his master class in Italy this summer. "It's the kind of chance,” says Gresko, “most pianists would give their fourth finger for.*’ * 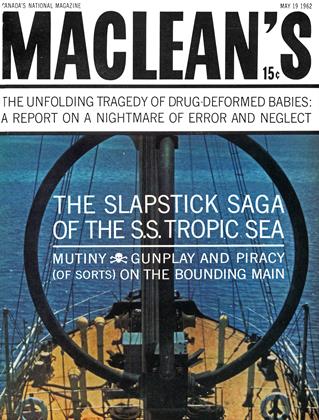