The astonishing success story of French publishers: now they can make money on books that don’t sell Peter Gzowski May 5 1962

With a rare (rare? unheard-of) unanimous vote, the Legislative Assembly has decided to provide up to $100,000 a year for “publishers’ insurance.” This means that from new on, when a Quebec publisher has a manuscript that he thinks is worthy but certain to lose money as a book, he can apply to the provincial Arts Council, and if that body agrees about the worthiness (and the cultural affairs minister agrees with that agreement), the publisher will be allowed quite literally to buy insurance against heavy losses. Nice, eh? But to some people here, the measure seems as necessary as subsidizing the Montreal Canadiens. A few years ago, perhaps, the French-Canadian publishing industry — which, with some very minor exceptions, is what Quebec publishing consists of—was as anemic as, well, the English -Canadian publishing industry. But now-, largely because of the new' enlightenment of the "quiet revolution" (which affects so much of Quebec life that I am going to stop putting it into quotation marks), it is as robust as the Forum box office at playoff time.

As the most recently evident symptom of this new' health, I give you the fourth annual salon du livre de Montréal, which wall have closed its doors just a few days before you read this. In past years, the salon has been what one bookman described as "a few books laid out in a hotel room for ladies with nothing to do to come and look at.” This year, it was held in Montreal’s gigantic Palais du Commerce, which is more usually filled with things like tractors. There were eighty-eight exhibitors, more than half from France but including twenty-six Canadians; they showed more than thirty-thousand different titles. There was a display of how a book is made, with live trees being chopped down, ground up. rolled out and printed on, all before the eyes of the crowds. One of the manuscripts

printed was the winning essay in a contest involving scores of thousands of French-speaking school children. A grand jury chose ten different best-ofbreed books, and from among them there were two best-in-shows, one fiction. one non. In honor of the salon, Montreal’s three main French dailies each printed a fat special section on books; three years ago, La Presse was worried about whether it cotdd maintain one weekly half page on books.

and writer who set up a new publishing house last May and has already become, if not French Canada's biggest publisher, certainly its liveliest and best known.

Hébert, a former newspaperman, first caught the public eye as a publisher a few years ago w hen, as head of a house called Les Editions de l'Homme, he issued the little book of essays called Les Insolences du Frère Unte!. That book, which was not only a sign of the quiet revolution but was in part a cause, has now passed the 115,000 mark in sales. Hébert’s new publishing house is

called Les Editions du Jour. In less than a year there, he has published thirty books. They have achieved a total sales of more than four hundred thousand copies — and none of them has lost money. Hébert’s books are usually topical, frequently controversial, often short and always cheap. They’re printed on quite rough paper, with soft covers. They average around 200 pages (some include photos) and are just the size to fit into the pocket of a man’s suitcoat. Most sell for a dollar; a few for $1.50. Here are a few of his best sellers:

Les Fous Crient Au Secours: an outraged account, by a former patient, of his experiences in the mental hospital of Saint Jean de Dieu that led to. as the psychiatrists on the government committee readily admitted, the recently announced overhaul of Quebec's policy toward treating the mentally ill (36.000 copies ).

L'Histoire Bouleversante de Monseigneur Cbarbonneau: an expanded version of the Nouveau Journal series on the late, noble archbishop of Montreal who fought the establishment and whom the Church sent to Obscurity, B.C. (30,000 copies).

La Crise de la Conscription: a book about — of all things — history (albeit recent ) by André Laurendeau that came out only a couple of months ago and has already reached the 15,000 mark.

But perhaps even more remarkable are the successes Hébert has chalked up with such worthy, although presumably not so popular, subjects as (these are direct translations of the titles) The Crisis in Education in French Canada. The Church and Quebec. The University Says No To The Jesuits, The New' Flowering of The Theatre in French Canada.

While not runaway best-sellers, each of these books has managed to pay its own way (the last one was helped by a $1,000 Canada Council grant ), mean-

ing it sold in the neighborhood of 5,000 copies.

What has Hébert got that Toronto publishers—who think they have a bestseller when a book passes three thousand—haven’t got?

The many advantages of Quebec

Aside from the new enlightenment here—and the curiosity about ideas that goes with it—he has a neat, geographically confined market; a very high proportion of the stores that sell his books are within driving distance of his Montreal headquarters. But, and perhaps more important, those stores do not sell on the same basis that English-language bookstores sell Englishlanguage books. Where the English stores take books on “consignment”— they can return them if they don't sell — many of Hébert's dealers buy his books outright. In this way. he knows he's going to sell 1.5(H) copies of anything. He also has a mailing list of ten thousand names and of them, more than four hundred are subscribers—instead of an ad. they get a book; and who's going to send back a one-dollar book even if he doesn't like it)?

(In fairness to the Toronto publishers. it should also be pointed out that Hébert does not have the same stiff competition from U. S. "quality paperbacks" which are saturating English Canada.)

"If things keep improving.” Hébert said recently at one of the nearly-weekly cocktail parties he throws to launch his books. “I'll soon be in a position where I can't lose no matter what l publish. Of course. I’ll have to keep the quality up over the months, or people will lose confidence. But I'm going to keep trying new things. Now that we have a series on history going, and one on ideas and one on different countries —and they're all successful—I’m going to try one on science. And you know, none of this would have been possible even five years ago."

Political note: fidelistas of the Union Nationale watch everything

A speech I would like to hear will be given this fall by Jean-Louis Gagnon, editor-in-chief and vice-president of Le Nouveau Journal, when he accepts his election to the Académie Canadienne Française, an association of intellectuals. Before Gagnon joined the newspaper. he was editor of Montreal’s biggest daily. La Presse, with its Liberal traditions. And for years before that (although as a youth his politics are said to have been quite far right), he was known — as he is known now — as one of the Union Nationales loudest and most eloquent opponents and one of the province’s most liberal Liberals. (It was he who moved, though unsuccessfully, that the party join forces with the CCF to fight the UN in the I960 election.) Anyway, the Académie seat that Gagnon has just been elected to

was formerly held by the only other journalist ever to be a member of the august body. Léopold Richer—each of its twenty-four fauteuils is specifically identified—and tradition has it. as in the Académie Française, that new members make a speech at their first meeting praising the member they're replacing. And Richer, who died last year, was an editor and writer for the UN weekly Notre Temps and one of the UN’s loudest and most eloquent défendeurs.

Another UN journal, this one called simply Le Temps, has been involved in —if that’s the phrase—another recent collision over provincial politics.

This one has to do with La Poule Aux Oeufs D'Or (The Hen with the Golden Eggs), an (I would have

thought) inoffensive weekly CBC-TV quiz program that gives away quite an astonishing amount of money to people who can answer quickly simple questions ("Is the turkey or the eagle in the national emblem of the United States?”) and then be lucky in selecting an “egg.” What caught the eye of Le Temps, it reported a couple of weeks ago. was the number of questions on the program that dealt with subjects that “concerned the Liberal Party.” Le Temps quoted answers involving the riding of Chambly (where the Liberals recently won a by-election), Pierre Laporte (who won it), and the minister of youth, Mr. Gérín-Lajoie. “Who is the writer of La Poule Aux Oeufs D'Or”? it asked, and titled its editorial “La Poule Rouge.” I wonder who wrote that? ^ 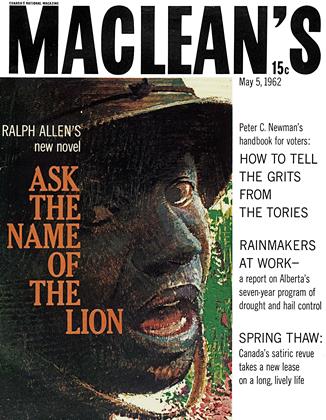