How to win voters and avoid the election issues Peter C. Newman June 16 1962

Neither John Diefenbaker nor Lester Pearson is showing much concern in this campaign over converting people to a cause. Neither man seems to care whether votes are bestowed on him with passion or indifference, just as long as they’re bestowed.

The two men are going at the campaign like applicants before a vast screening board of ten million voting judges, who’ll decide which of them is to get the nation’s top job. Liberal leader Pearson is presenting as his chief qualification the pledge that if he’s chosen, he’ll cure the worst of our unemployment problem. Conservative leader Diefenbaker’s main credential is that he’s already had the job, and kept most of the promises he made.

His study of Canadian history has persuaded John Diefenbaker that the lack of major national issues tends to favor the party in power, so he deliberately started his campaign in low key and has kept it there. He’s determined not to make any moves—or rash promises—which might give the people something to vote against. Tory planners believe that despite high unemployment, the majority of Canadians are fairly well off and fear political change. Their strategy is geared to institutionalizing John Diefenbaker as The Prime Minister. “The P.M. is the campaign,” says one of them.

While Diefenbaker has simply been shrugging off the Liberal platform as "banquet in the sky promises,” the Liberals maintain that their ambitious program is neither impractical nor extravagant, since it could be financed out of general revenues if the economy “gets moving again.” The Liberal promises aren’t even particularly radical, party planners insist, because each is a natural outgrowth of past Liberal legislation—-the university scholarships plan from the party’s university grants system, the urban reconstruction scheme out of a broadening of the Liberal legislation that set up Central Mortgage and Housing Corporation.

More and more in his coast-to-coast stumping, Pearson has been outlining projects that appeal to sectional interests, without prompting regional jealousies. In attempting to construct a victorious majority, he’s been trying to strike the difficult balance between pushing his own platform and attacking the performance of the Tory administration. It’s a tricky

business, because Pearson realizes that Canadian voters can dislike opposition parties, too. Much of the Liberal strength in the 1949 and 1953 campaigns was based on active distrust of the Conservatives under George Drew. Pearson is also aware of enough anti-Liberal reaction left over from 1957 and 1958 that too vigorous an attack on the Diefenbaker administration might sound like sour grapes. "What we're trying to do,” says Tom Kent, Pearson’s chief policy adviser, “is to create a sense of missed opportunities under the Tories. The point we’re trying to get across is that we’ll make things better; the Tories won’t. That’s quite different from just saying: The Tories make things worse.’ ”

The wheat sale is a crowd pleascr

Just as the Liberals couldn’t prevent the pipeline debate of 1956 from becoming the dominant issue of the 1956 campaign, so Pearson feels the Conservatives can’t stop unemployment from being his main point of attack in this election. Despite the slight business upturn of the last few months, short-term employment prospects aren't encouraging. The politically independent Senate committee on manpower and employment reported last summer that if the unemployment rate is to be reduced to a manageable 3Vi percent, at least two hundred thousand new jobs will have to be found annually for the next five years. That’s more than three times the rate of annual employment increase achieved over the past five years.

Pearson is concentrating on such bread-and-butter issues as unemployment, the high cost of living, the Tories’ budget deficits, and the devaluation of the dollar. All his private surveys indicate that these are the problems which really concern the average Canadian. According to the detailed studies carried out by the Liberal Party, these also are the areas which most voters think the Diefenbaker government has neglected during its term in office. (The same surveys show that the two main accomplishments of the Diefenbaker government recognized by the majority of voters have been its social welfare measures, and the sale of wheat to China.)

There’s little indication in these studies that the average voter differentiates between the state of our prestige abroad under Liberal or Tory governments, or that he can detect any difference in the defense policies of the two main parties. Acceptance or rejection of nuclear warheads should have been the main defense issue to be settled by this election, but the defense policy statements of both parties are deliberately so vague that they sound like Peter Sellers’ parodies on politicians spouting words without meaning. In Victoria on May 1. Pearson summed up his stand. “I say bluntly,” he declared, “that a new Liberal government will not hesitate to adapt its defense policy to changing conditions.” Ten days later at Brockville, Ont., not without justification, Diefenbaker described the Liberal defense policy as "a conglomeration of confusion, contradiction and incoherence.”

Unfortunately for the Tories, two days before the Diefenbaker pronouncement, External Affairs Minister Howard Green, referring to the Liberal stand on nuclear warheads, told his own nominating convention in Vancouver: “Now, Pearson has come out with the same policy as ours.” Two days after Diefenbaker’s Brockville statement, in another reference to nuclear warheads, Defense Minister Douglas Harkness told a Lethbridge audience: “The Liberals have come around to the Conservatives’ point of view.” (Actually, the decision on nuclear warheads has already been made; they’re now stored in the U. S., just south of the Canadian border, and will be flown into position on our soil in the event of approaching war.)

The Government’s relations with the U. K. over Britain’s intended entry into the Common Market haven’t become much of an issue either, since the Liberals and Conservatives now both support the

Kennedy tariff-cutting initiative. Senate reform, free enterprise versus socialism, and dominion-provincial relations—all billed as major topics—have been all but forgotten.

Two blocs of the electorate thought to be against the government are the military and federal civil service votes. Although the army stayed loyally Liberal through the last two elections, most civil servants were as fed up with the Liberal regime by June, 1957, as the rest of the country, and during the first days of the Diefenbaker government they took great pride in the smoothness of the takeover. Since then, however, severe disillusionment has set in among senior federal employees. With some exceptions, they found that the Diefenbaker cabinet regarded them as Liberal partisans and seldom trusted their advice. At the same time, many civil servants complain that the Diefenbaker government has been far less efficient than its Liberal predecessors.

This doesn’t mean that all government departments have suffered through Tory administration. Justice under Davie Fulton, National Revenue under George Nowlan. Post Office under Bill Hamilton and especially Agriculture under Alvin Hamilton have flourished. But other departments — especially Defense and External Affairs — have declined in prestige.

Whether a Liberal government under Lester Pearson would be any more imaginative remains to be proven; that it would be calmer and managerially more efficient seems likely. Not only would a Pearson government receive full-out support from Ottawa’s civil servants, but Pearson has been able to attract to his team men of high achievement in their own fields who might be expected to run this country with an independent authority that has seldom been granted to cabinet ministers under the personal kind of superprime-ministership practised by John Diefenbaker.

Although Pearson and Diefenbaker are both offering to lead their followers along the soundest path to a Canadian utopia, neither man will be able to solve the many problems confronting this country without some agonizing reorientation of The economy. Both leaders have a fierce ambition to win and each man knows that unless the contest is very close, the loser this time will be the loser for good. * 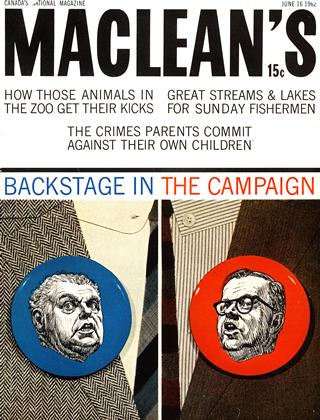