GOING: the supporters of the separatist movements Peter Gzowski June 2 1962

In an interview he gave to the FrenchCanadian monthly Liberté, Dr. Marcel Chaput, the separatist leader, was asked which political person, living or dead, he admired most. “Jeanne d'Arc,” Chaput said, and went on to explain that the reason he had chosen her was that she wasn't a politician at all. This confession pointed up one of Chaput’s dilemmas: the movement he heads.

Rassemblement pour ¡'Indépendance Nationale, is now w'ondering whether it should turn itself into a provincial political party or remain what it is, one of the three “educational” separatist groups in the province. But Chaput’s remark could be interpreted another way. Last fall, when he was dismissed from his job as a Defense Research Board scientist, Chaput suddenly became separatism’s favorite martyr — though his deliberate playing of the role might have been a little too much for the Maid of Orleans. And now, half a year later, Chaput may become a kind of martyr he didn't bargain to be.

There are signs that Quebec's separatist jag is over. It is certainly running down. And it may well be that Chaput, and anyone else who has been devoting himself to the cause full-time, will be one of the nation’s—Canada’s—unemployed.

The funds are running low

For one thing, the separatists aren’t getting enough money. I have heard unofficially — these figures aren’t quite trumpeted about—that the RIN’s last campaign for $100.000 brought in $12,000, and that it cost $6,000 to raise that. This scarcely seems like enough to maintain the Montreal office from v/hich Chaput and two secretaries run the organization. A more significant symptom is the near disappearance of separatism from the news. Last fall, it seemed that every day’s paper carried something about it: a letter, the report of a meeting, or someone’s public endorsation or denunciation. Now' it’s the other way around; it's a rare day when there is any news. In the week in which I’m writing this, for instance. Le Devoir's total attention has consisted of publishing a couple of lukewarm letters to the editor. A few weeks ago, the RIN held a rally in Quebec City that is reported to have attracted 1,200 people, but two of the French papers ran stories largely confined to the fact that someone had planted a bomb in a men’s washroom. Le Devoir did run part of Chaput’s speech, but perhaps it felt that his giving a speech at all was news: he’s only being asked to deliver about six a month, most of them in small towns.

Shortly after the Quebec rally, a letter to the editor was published in Le Devoir. Signed “A. H. Smith, TroisRivières,” it purported to be from an English-Canadian who had learned French and wanted to put forward the English-Canadian point of view. It was a compilation of all the spiteful cliches and false generalizations that some French-Canadians think all EnglishCanadians spout about the French. But a couple of days later Le Devoir explained that something had slipped in its usual careful checking of letters, and it now knew' that both the name and the

return address of “Smith’s” letter were phony. Without quite saying so, Le Devoir made it clear that its editors were sure the letter was a separatist plant— and it did seem logical that a spate of anti-English reaction would have helped to draw attention to the fund-raising campaign that was current then. As for membership, all 1 can report is that none of the three separatist movements has been bragging. It’s probably a fair guess that all three have fewer than ten thousand members together—they claimed six thousand last fall.

La Presse recently reported a survey showing that forty-one percent of the students at the University of Montreal wanted an independent Quebec. But ( 1 ) that survey was taken in January when emotions were still high, (2) there w'as nothing to compare it w'ith. to see if the figures were rising or falling, and (3) La Presse considered that the fact w'orth putting in the headlines was that, in the supposed separatist hotbed of the U. of M., fifty-seven percent of the students had been opposed to independence. For a more recent assessment, I called Prof. Dale Thomson, of the U. of M. political science department. Thomson is a fluently bilingual teacher and writer who had been doing quite a lot of “Listen Canuck” speaking this winter. "I think you could say that if there are no new issues.” he said, "the bloom is off the rose.”

That is perhaps the separatists' greatest problem: no new issues. We have bilingual cheques (haven't we?) and on the other subjects — the civil service, flags, anthems, you know'—there isn’t anything to say that hasn't been said already. Whether or not the separatists’ complaints on these scores are valid, they simply can’t go on raving about them w'ithout becoming bores. And anyone who has not been bored has seen virtually every politician of influence in this province, from Louis St. Laurent to Jean-Jacques Bertrand, repudiate separatism. Now there is no one left to declare.

emotional attractions of separatism. But there has been an attack on the intellectual front, too. In April the influential little magazine Cité Libre devoted a special issue to separatism. The article that has attracted the most attention was a fourteen-page (with forty footnotes) blistering attack on separatism by Pierre Elliott Trudeau, the wealthy, learned young lawyer-economist now on the staff of the University of Montreal. Trudeau's essay had an unusual significance: although, in Quebec’s intellectual community, Trudeau has been knowm as one of the bitterest and most lucid opponents of separatism, he had not. until the April Cité Libre, chosen to pay it public mind. And when he did — bourn! This is one paragraph:

A waste of time and energy

“All the time and all the energy that we use to proclaim the rights of our nationality, to invoke our sacred mission, to trumpet our virtues, to weep about our misadventures, to denounce our enemies, and to declare our indeperidence, have never made one of our workers more adroit, one civil servant more competent, one financier richer, one doctor more advanced, one bishop more learned or one of our politicians less ignorant. And, if w'e except a few eccentrics, there probably isn't one French-Canadian intellectual who hasn’t discussed separatism at least four hours a w'eek for a year: that makes how many thousand times two hundred hours spent solely flapping our jaws? And who can say he’s heard, in all that time, a single argument that hasn’t already been discussed ad nauseam twenty, forty and sixty years ago? . . . The separatists of 1962 that I’ve met are — ma foi! — generally good heads; but the rare times that I’ve had the honor of talking with them for a while, I’ve nearly always been shocked by the totalitarian spirit of some, the antisemitism of others and, in all of them, the worship of generalizations and the economic incompetence.”

This is perhaps the first time the

separatists have had a taste of their own kind of invective medicine. And, coupled with Trudeau’s less impassioned but carefully reasoned arguments, it has had its effect—to cool the fever of separatism. But while separatism may sometimes have looked like the disease, it has really been — or is — more of a symptom. What lies underneath is what is generally called nationalism, and French-Canadian nationalism is just as strong in Quebec—and just as important to the rest of Canada—as it has been for a long time.

Where nationalism differs from separatism may be described as the point where reason differs from emotion. And if the emotion has cooled down, the rational desire of French Canada, of a newly self-proud French Canada, for a new deal is as strong as ever. Last month. Le Magazine Maclean, this publication’s French-speaking counterpart, tape-recorded a panel discussion that illuminates the difference. The subject of that panel was whether it’s necessary to remake confederation and if so. what changes should be made. The panelists were Trudeau, the editor André Laurendeau, the politicians JeanJacques Bertrand (Union Nationale) and René Lévesque (Liberal), and the English-speaking constitutional lawyer Frank Scott. In the discussion, there were many examples of “nationalism” —most of the French-Canadians on the panel are regarded as holding the nationalist point of view. Bertrand, for instance, told of an English-speaking bank manager in his constituency who was proud to stand for "one language and one government” and Bertrand was pretty bitter about it. But the conversation w'as generally on practical grounds: how the provinces and Ottawa could work out a more satisfactory (for Quebec) tax-sharing program; whether Laurendeau’s suggestion about a royal commission on bilingualism could be made to work (someone suggested the universities run it); that sort of thing. Confederation, in other words, was regarded as a starting point, something to be re-examined and not something to be scrapped in pique. But at the same time, the tenor of the discussion was that something is wrong, something does need to be fixed.

Since the election of I960. French Canada has been doing a staggering amount of self-examination and, in its new delight at being able to do so. it has only been natural that such extreme ideas as separatism should have been given a lot of attention. It looks now as if that idea is dying down but we are still left with its rational afterglow. For the next few weeks, things are not going to get appreciably better for the separatists: the current election campaign, in v/hich they cannot logically take any part at all, is going to drive them even further from the news. But in Quebec one of the big election issues—perhaps the big issue—is whether, or how much, Ottawa under either major party will be prepared to pay attention to French Canada. So that even if—or when— separatism as a formal movement is completely dead. English Canada is still not going to be able to remain aloof to this province’s reawakening. * 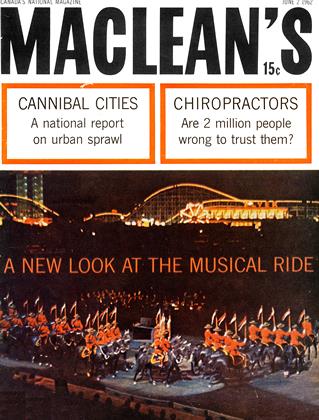