To the defense: chiropractors and their patients low concert pianists practice their music at home

widely understood, there is bound to be increased publicity, which we welcome. However, we have a responsibility to see that the facts presented are accurate and not weighted with obvioush prejudiced opinions (Can you trust a chiropractor with your health? June 2). It is interesting that the major critical comments on chiropractic are from the Maritimes and Quebec where medical opposition has •defeated our efforts to obtain regulatory legislation in the public interest Uo eliminate the unqualified. Who. I then, is responsible for any low standprlls than might be evident? In con,trapt, the governments of Manitoba anAl Alberta, having chiropractic legislati/on, have both provided chiropractic caj/e for pensioners, welfare cases, etc. Eighty-seven percent of provinces and states in North America have passed chiropractic legislation; the other thir'<Jcn percent have refused because of Vedical opposition. You mentioned fat chiropractors were mentioned at ^the Congress on Medical Quackery. Physicians were also involved in selling sea-water for $20 per gallon to cure many ailments. The reference to !Dr. Louis Reed’s statement that chiropractic schools arc open to welders, ietc.. and the statement by B. J. Palmer (that. “It’s our business to manufacture chiropractors,” must be taken in their proper context. Mr. Katz failed to mention that Palmer's statement was made many, many years ago and that both medical and chiropractic colleges w'ere operated for profit in their early [ years. Abraham Flexner’s report on medical education in North America at that time (1911) resulted in over 50% of the 155 medical schools being closed because of low' standards and (the overproduction of poorly trained medical practitioners. When view'cd in the light of these historical facts, Palmer’s early statement loses its significance with respect to modern chiropractic education. Entrance requirements today are the same as tor entrance for university, n. c. SUTHERLAND, D.C. EXECUTIVE SECRETARY, CANADIAN CHIROPRACTIC ASSOCIATION, , T ORONTO

The most consistent complaint Sidney Katz registered against chiropractors was their inability to diagnose. Please hear my experience. For a continuous ache in my arm 1 contacted my family doctor and about 25 visits and $155 later 1 was discharged with no relief and no suggestions as to how to obtain relief. The fee represented the amount paid for office calls, drugs. X-rays, physiotherapy and an orthopedist. A year later I was in pain again and I visited a local chiropractor chosen from my telephone hook. After a few visits he asked me to visit a •^rgeon he works with, who admitted didn’t know' the cause of my pain. ’ chiropractor then called in an nist who ordered X-rays and con‘ the diagnosis of the chiroprac%n made an appointment for

me to see a neuro-surgeon and a lamenectomy was successfully performed with the chiropractor witnessing the operation. I would suggest that Sidney Katz could do more good by investigating the reason why hospital facilities, particularly X-ray facilities, are barred to members of the secondlargest healing profession in Canada and their patients, EVELYN M. HUAS.

^ While your article on chiropractic was one of the least biased 1 have read, it still succeeded nevertheless in casting this profession in an unfavorable light. MRS. J. EDWARDS. CALGARY

^ You can say anything you want about chiropractors: the only thing 1 know is that under medical care I wore 13 corsets in a period of 15 years and 1 had terrible chronic pains in my hack and my legs. In despair 1 turned to a local chiropractor for help and after a number of treatments I threw the corset away. My pains are gone and I curse all MDs who had treated me before. Ehe amount I paid for all that to my chiropractor is ridiculous — a mere $75 including all X-rays. Now. nobody will tell me I can’t trust a chiropractor. I've had personal proof enough, PAUL LAPI ANTE. LAF LECHE. P.Q.

One highly significant fact, which was not presented in the article, is that more than seventy percent of the average chiropractic practice is comprised of patients who have tried the full course of medical treatment for their condition and have come into our offices as a last resort in the search for HEALTH.-J. B. ACTESÓN, D.C., WROXETER, ONT.

Can you please identify the instrument played by Richard Gresko (The new w'ave of Canadian music) on page 29 of the May 19 issue? MRS. R. L

It's a practice keyboard. The keys have the tension of a real piano hut make no sound when struck.

Congratulations on the courageous "Cannibal cities" (June 2) by Jane Becker. Our most precious life-giving national resource — the most fertile soil in the best climate areas of Canada — is at the mercy of real estate speculators and promoters, thanks to the do-nothing attitude of our federal and provincial GOVERNMENTS.-ROBERT

How to tame sailors

I was interested to read On the waterfront: how to save sailors from sin (May 19). Some years ago. I was in the employ of the Commissioners for the Port of Rangoon, Burma, and was instrumental in part, in the building of a similar hostel (known as the Mayo Marine Club) in Rangoon. One of our problems—-perhaps the greatest—was to find a suitable superintendent to manage the place. Our first superintendent and his wife, a most devout and conscientious couple, were hopeless. The man discouraged and eventually closed the bar. and his wife before putting the magazines in the reading room, carefully cut out all the pictures advertising women’s underwear! We had to get rid of this otherwise estimable couple, since by their actions they denuded the club of all its members. We then had a series of superintendents, all picked men and women, who were unable to resist purloining club funds. At long last, we got the right chap and his wife. The club from then until the Japs overran Burma flourished as the green bay tree. The point about a suitable superintendent to run the hostel is one likely to be overlooked by the Toronto planners. But I assure you it is of the utmost importance if the hostel is to be a success. - H. C. GRANGER-BROWN, COM-

Impressions of the musical ride

In the current issue delivered today there is an article purporting to laud the "Mounties’ ” musical ride. Are the blobs accompanying it really meant to be examples of worthy photography? Please spare us such excursions into the realms of nightmarish impressionism.-W. H. H. MOFFAT, PENTICTON,

Case history of a rainmaker

Ralph Hedlin’s article, Alberta’s affair with a rainmaker (May 5), reminds me of what occurred in the Klondike gold fields when I lived there many years ago. During a very dry summer when the creeks had gone dry. the miners had no water to sluice with. Without water, they could not mine. A fake rainmaker arrived assuring the miners he could and would make rain for a price. He was paid SI,000 on account and the mine owners agreed to pay him SI0.000 if he made rain wáthin ten days. He shut himself in a tent on the summit from which the gold bear-

ing creeks flowed. The ten days pas^ and no rain fell. He left the Yuk« The day after his departure rain fi in torrents. He left just one day tt soon to reap the benefit of his frau

Eight thousand members of the Man toba Federation of Game and Fis Associations want to correct the con pletcly erroneous impression left h the news item in the Watch For (wil turkey hunts) section of your June I issue. Wild Gobblers Unlimited is a organization composed of l I associj tions within our federation. It has À in operation for four years now ar Zii one aim is to establish the wild ti Id as a Manitoba game bird. The ej nothing private about the organiza id any Game & Fish local may joir tn project by paying the $50 affili, w fee and annual dues of usually It 4 amounts. Once the birds are relea ^

Wild Gobblers Unlimited ceases t own them; they belong to the peopl of Manitoba and the Provincial Garni Branch will be responsible for the sei ting of open seasons on them whei and if their numbers permit. And: Blatz, president of Wild Gobblers, hai devoted endless hours of his time t¡ the project and the implication in yod item that he expects to make mone out of it is wholly false, CHARLES ;

Hindsight on a fearless forecast

In The go-for-broke boss of B.C (April 7) Ralph Allen makes refcrenc to the Liberal Party in this province The fact is that far from being "dea' as doornails," the Liberal Party o British Columbia is becoming the mos vital force in this province. Not onl; did our candidates obtain almost 2295 of the popular support in I960, bu for the second consecutive year, Lib erais have won almost 50% of th* votes in our University of Britisl Columbia campus elections. This Lib eral resurgence was noted in a recen province-wide survey by the highly re spected press gallery correspondent Mr. Paddy Sherman, who informet his readers on May I that discnchar' ment with Social Credit is leadif growing support for the Liberal in this province. R. J. PER M.L.A.. LEADER OF THE LIBER/1 JN BRITISH COLUMBIA, VA’ 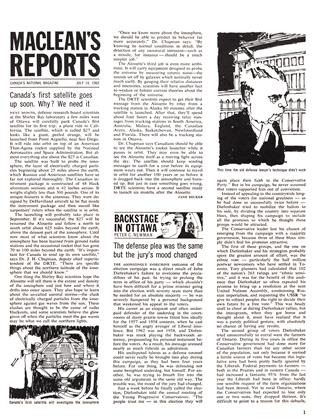