THE QUIET REVOLUTION in Quebec took a step backward with the death in Montreal of Le Nouveau Journal. This may seem an unnecessarily gloomy view of the collapse of a newspaper that had been alive only nine months, but it's a view that a great many people here are taking. In its short and not always happy life, this paper had become an important outlet for the kind of ideas that are changing Quebec so rapidly. It was a blow to more than journalism last month when, badly in debt and with many of its people bitterly disillusioned, Le Nouveau Journal closed its doors.

Most of the paper's staff had thought there was a need and a demand for their kind of journalism here. They felt that with a few more months and a few more dollars they could have made Le Nouveau Journal pay. That's doubtful. Final circulation was under 50,000, less than half of what the paper's planners had felt they needed, and practically out of sight of the 270.000 sold by Montreal’s biggest afternoon daily. La Presse. Nevertheless, one can't help thinking that Le Nouveau Journal deserved a better chance, with a more sensible administration. Part of the circulation difficulty was just inefficient distribution, and one of the reasons the losses were so high (over $2.5 million) is that from the outset the paper went first class: reporters coming on staff— some of them at twice their previous salaries— had a choice of red or green phones on their desks.

If nothing else. Le Nouveau Journal was the best-looking paper in Canada. It was designed to an em. Slathered with color, bold and clean, it was a sort of North American adaptation of France Soir and L'Express. Yet it was more

than that: a paper with a mind and a technique of its own. The main stories of the day were summarized in headline form and grouped like ads on page one. The reader turned inside for the body type.

There were not many stories, not enough to make the reader think he was getting all the news. But they were all made to count. Lc Nouveau Journal originated more than its share of the news. It was the paper that exposed the uninspected meat situation in Quebec and added to the language the name of a 1961 dance called The Separatwist. There were two cartoons every day. There was a column called, loosely, A Prowler’s Notebook, that gave us news, gossip and opinions not published elsewhere. Although the presence of Le Nouveau Journal did have some effect on its rival, La Presse—La Presse brightened itself considerably under opposition—many people felt that the way to get a real picture of the news in Montreal was to read both afternoon papers: La Presse for information, Lc Nouveau Journal for sparkle and interpretation.

The man who made Le Nouveau Journal was Jean-Louis Gagnon. Gagnon used to edit La Presse. Two years ago, a member of the family that owns that paper, Mme. Angelina DuTremblay, squabbled with her relatives and announced that she would finance a rival paper. Gagnon, who had added a great deal of life to La Presse but still felt stiffed there, joined her. Mme. DuTremblay sank $10 million in a foundation, one of whose functions would be to pay for Lx Nouveau Journal. Many of the best La Presse men bolted to the new newspaper with Gagnon.

This spring, as it grew increasingly clear that Le Nouveau Journal was not going to wrest leadership away from La JJresse and that it would remain a losing proposition for some time to come. Mme. DuTremblay picked up her marbles.

Some of the staff made a last-minute appeal to the Canadian-born American mining millionaire, Cyrus Eaton. Eaton admitted interest, but said he’d need at least two months to investigate. In the meantime, the banks and the Montreal Gazette, printers of Le Nouveau Journal, were nagging. In the second week of June, Le Nouveau Journal fired thirty-five men, in the hope that a streamlined budget might stave off the creditors. The next week the paper collapsed.

What happens now depends to a large extent on La Presse. Only two of the defectors have been hired back as I write this. Yet it's doubtful La Presse will revert quickly to drabness. Gagnon’s successor at La Presse, Gérard Pelletier, is a bold and able newspaperman too, and has seen what a really driving newspaper can do. Nevertheless, Montreal is a duller news-

paper town now than it was last month. And no one—here or anywhere else—is going to be anxious to start another metropolitan daily. If you can’t do it with that much money and that much talent, how can you do it?

□ The Separatists are getting to be faster on their political feet than just about anyone in Quebec. All through the federal election campaign the two major separatist groups—one of the three has folded for lack of interest—drummed on the theme that separatists were not to vote at all. Le Rassemblement Pour L’Indépendance Nationale even held parades to publicize this theme. The result: Quebec’s vote was down a bit from 1958, but no more than any other part of Canada, and it was the opinion of most observers that the separatists’ pleas had virtually no impact. But in the aftermath of the vote the separatists have been trying to prove that the remarkable rise of Social Credit in Quebec was in fact a separatist victory. “We laid the foundation for a political party,” said Marcel Chaput, president of the RIN.

Raymond Barbeau, president of L'Alliance Laurentienne, said virtually the same thing. Even the Jean Baptiste Society, the ultranationalist group that has not—not yet, anyway— endorsed separatism, explained through spokesmen that: “The Social Credit victory was the first manifestation of collective independence for French Canadians.” Other people seem to feel the separatists are a little late getting on the bandwagon. 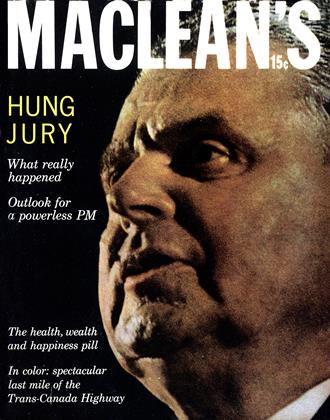