JOHN DIEFENBAKER will make Canada’s last stand against Britain’s entry into the European Common Market at the Commonwealth Prime Ministers’ Conference in London early in September. Most of his objections will make sense, as far as they go. Canada, and almost every Canadian, will be poorer for a while — although not necessarily poorer in the long run — if Britain acts for her own advantage instead of ours. But Britain will look after herself whether we like it or not. And if she gains entry to the Market, the greatest question that will confront John Diefenbaker, his political opponents, and the rest of us this fall will be how, for the first time in our history, to look after ourselves.

There have been several times in the last few years when we probably should have asked ourselves just what we mean by look after ourselves; but we didn’t ask. Now we have to—or, to put it another way, if we don’t ask ourselves now we’ll miss what may be the last chance we’ll ever have. Lately we have had some brutal proofs of weakness when we had been priding ourselves on strength. The world had to put up a billion dollars to shore our sagging credit; we are the only “advanced” nation in the West living by an austerity regime. We have certainly not stopped being proud, but if Britain finally and sensibly cuts us off for her own advantage in September we will have at last reached the place where we have to decide what to be proud of.

For our part, we believe that our national pride and our national ability to look after ourselves are almost the same thing, and that in any case both are jeopardized by a national unwillingness to look at the second half of the 20th century not as Laurier promised it to Canada but as events have made it. While John Diefenbaker opposes Britain’s bid to enter the Common Market, John Kennedy proposes what Washington calls a Grand Design to make the U. S. the Common Market’s partner.

Contrary to what the prime minister has said, nothing disqualifies Canada from associate membership in the ECM — the Treaty of Rome allows association by non-European countries and even provides for amendment of the treaty to accommodate them. Several imaginative proposals have been draughted for redividing production in some industries between Canada and the U. S — instead of duplicate plants turning out duplicate products on both sides of the border, we would produce some lines for sale in both countries and American plants would do the same thing.

Common market membership, common production programs — these, or other measures like them, would make us match our brains and abilities against the best at work outside Canada. We would run risk: it’s a put-up or shut-up game. But unless we want

to become an industrial backwater feeding on a kind of bananarepublic nationalism and not much else, it’s the only game in town. To play it we will have to adopt a radically different, critical kind of nationalism. Instead of seeking shelter from competition for the goods we make, the ideas we hold and the institutions we support, we will have to throw them into competition with the best of their kind and improve them if they don’t stand up. This is the only kind of nationalism that will serve our real purpose: the preservation of Canada’s political integrity and intellectual character in dignity and vigor, not fear and trembling. KEN LEFOLII 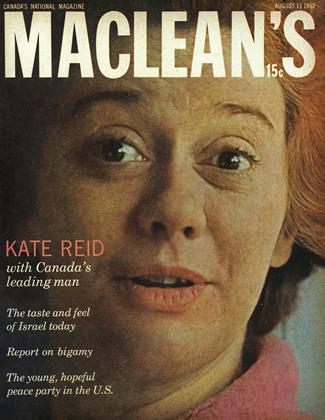