IF FOOTBALL LINEMEN are pure muscle, ear to ear, as advertised, how do you explain Jake Gaudaur, six-three, two-forty, and a yard wide? He caught elbow smashes for thirteen years as a chunk of dressed beef with Hamilton, the Alouettes, the Argonauts, and even the old Toronto Indians, a clutch of playful boys who divided up a crate of oranges at the end of a season in lieu of money. Today? Well, today Gaudaur is the principal owner, the president and general manager of the Hamilton TigerCats, who last year showed a profit. None of the game’s deep thinkers, the precious quarterbacks and the controversial coaches, has climbed nearly so high as this deceptively bland, black-browed hulk of 4L

So devious as to be almost invisible, the travels of Jacob Gill Gaudaur (pronouced G’dar) are hidden far below the headlines in almost every good football story of the last half-dozen years. Gaudaur will hop a plane at the drop of a rumor, and the game has been deeply affected by his flights. His most celebrated coup, of course, was speeding to Montreal to pry loose Sam Etcheverry and Harold

Patterson, the Rifle and Mr. Wonderful respectively, from the Alouettes for Bernie Faloney and a man named Paquette. It wasn’t Gaudaur’s fault that the Alouettes’ owner, Ted Workman, had signed a secret agreement with Etcheverry that Sam would not be traded without his consent. Violating that agreement, presumably under the spell of Gaudaur’s persuasiveness, Workman thus made Etcheverry a free agent who then signed with the St. Louis Cardinals. This was the top football story of 1960; it was instigated by Gaudaur.

It’s almost forgotten that Jake lured Ronnie Knox to Canada in the late 1950s, flying to Vancouver to track down the most ferocious poet who ever played quarterback, the most publicized player in the country during his three years here. Who remembers that it was Gaudaur who brought Bernie Faloney back to Canada after Edmonton cut him loose when he entered the U. S. army in 1955? Last season Faloney was voted the outstanding player in the game.

There’s more. Reading a rumor, Gaudaur fled to Philadelphia in 1956 to induce Jim Trimble to come here, a coach who has since enlivened the Canadian scene by planting controversial stories in newsmen’s laps, needling rival coaches, selling the game as a wry and garrulous after-dinner speaker and supercharged press-conference conductor.

Gaudaur will go anywhere, any time. In

1960, the only year in which the Tiger-Cats have stumbled since he took over, he was already building 1961 ’s championship club before 1960’s schedule was a third over. In Disneyland — Disneyland! — he buttonholed Wellington Mara, the owner of the New York Giants, to acquire two late cuts, both linemen, who helped turn the Tigers into terrors in

1961. A few weeks ago he heard it whispered that Jackie Parker and the Eskimos were in disagreement (as he’d heard about Patterson and Etcheverry with the Alouettes) and he flew immediately to Edmonton. It turned out that Edmonton’s general manager, Joe Ryan, was not quite that disenchanted with Parker, but Gaudaur, and nobody else, was there if he had been.

Even at home in Hamilton, Gaudaur’s unseen hand is seldom still. Just over a year ago, he convinced the city’s parks board that it ought to spend $750,000 refurbishing the ancient Civic Stadium, boosting accommodation (and, obviously, gate receipts) to nearly 27,000. In his six-year tenure as the Tiger-Cats’ general manager, he has lifted attendance (initiating first-rate half-time entertainment to attract football fence-sitters, for example) from an average of 14,000 in 1955 to 23,500 last season. On a seven-game home schedule, that's nearly 60,000 extra people, or almost a quarter of a million dollars.

Gaudaur grew up in modest circumstances in Orillia, Ont., where his father, Jake senior, a former world’s professional rowing champion, ran a less-than-lucrative boat business. As a football player young Jake insisted that the team find him employment. He worked as a laborer in the steel mills when he played for the old Hamilton Tigers and in 1947, in Montreal, he went to work for the Whyte Motor company on the production line. By 1955 he was manager of Whyte’s Toronto branch and wholesale manager for Ontario. His annual salary was $25,000.

That year, after a dismal season at the gate, the Tiger-Cats offered him the general manager’s job. He quit Whyte (“It’s corny; you won't believe it,” he explains, “but I really love football”), accepted the job, and was elected president two years later. In 1960 he and a group of 11 others bought the franchise (he is principal stockholder).

This fall, Jake Gaudaur is still wheeling and dealing. He picked up seven experienced players from other Canadian professional clubs, including Bob (the Jet) Jeter from Vancouver and Jo-Bob Smith from Edmonton, two of the game’s better halfbacks, and gave up only expendables. He got Bobby Kuntz, a tough firehydrant fullback, from the Argonauts for disgruntled Gerry McDougall, whom the Argos may lose. McDougall refused to sign a contract with them, instead is playing out the option on his 1961 contract, and plans to return to California after this season.

Recently, Gaudaur made this deal with a Big Four'rival he declines to name: He held out for inclusion of $1,000 cash in a transaction announced as a straight-player swap. He used that $1.000 to purchase Jo-Bob Smith, who set Edmonton's all-time pass-receiving record two years ago. In effect, then, one of Gaudaur’s own rivals put up money to buy him the record-holder. Dim-witted linemen, indeed. 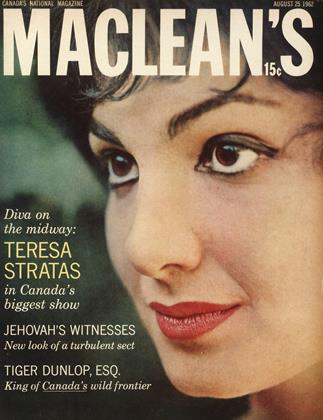