ERIC WEINBERGER is a sad-eyed 30-year-old Jew from New York who believes that if you have strong moral convictions you should do something about them. Last August, for example, he watched a group of pacifists, members of the Committee for Nonviolent Action, holding a demonstration at United Nations headquarters. One of them handed him a pamphlet that so impressed him he quit his job— a fairly good one—to devote himself to the precarious hand-to-mouth existence of a fulltime CNVA staffer. In his new career he trudged on weary peace marches, learned what it was to be held up to ridicule, and was jailed for acts of civil disobedience.

He also grew more and more certain that it was the duty of pacifists, as men of good will, to do what they could to stamp out racial discrimination. He decided that the area of the United States where discrimination has been most pronounced in recent years is Fayette and Haywood counties, in Tennessee. So that’s

In 1959 the Congress on Racial Equality and the National Association for the Advancement of Colored People sent organizers to Haywood and Fayette to persuade the Negroes to stand up for their rights and insist on being enfranchised. This touched off an extraordinarily bitter struggle that is still far from settled. The whites canceled the leases of colored tenant farmers, evicted sharecroppers from land they had farmed for generations, and applied economic reprisals of all kinds.

White merchants who had always extended credit for seed and fertilizer withdrew it. bankers foreclosed loans, and an oil company refused to sell its products, even for cash, to a Negro service station. A grocer was driven out of business because no wholesalers would supply him.

Meanwhile, with scores of families forced out of their homes and threatened with starvation, the federal government sent army tents and surplus food to the scene. Steps by the federal attorney general’s department have helped curb the more pronounced forms of injustice and the dispossessed at least have canvas over their heads and food allotments. What they haven’t had, and what is grim to do without, is cash.

When Weinberger heard of their plight he decided to start a co-operative industry that would provide them with .at least a small amount of income. He knew that tote bags are popular with women this year and he had a friend, a handicraft teacher, create a pattern for one that would be easy to put together. Then, with $20 worth of light tan suede, he took off for Fayette and Haywood counties, last February.

He was, from the beginning, anathema to the whites and there were Negroes, too, who couldn't quite figure him out. But gradually he gained their confidence, and today the tote bag business that he created, not for himself but for the most abused Negroes in the whole U. S. A., is a flourishing venture. The leather for the bags is cut at a central point, then farmed out to 75 women to be hand-stitched. The value of the bags sold thus far is between $12,000 and $15,000—all this from a $20 beginning. They are priced at $9.75 and may be ordered from the Haywood County Civic and Welfare League, 307 West Margin Street, Brownsville, Tennessee.

As Weinberger has learned—painfully—you take real risks when you involve yourself in an explosive racial struggle like that at Haywood and Fayette. He and another pacifist, Jeffrey Gordon, were arrested and, they claim, severely beaten at Brownsville on March 2. They were released three days later with no charge pressed against them.

“We were stopped by the sheriff’s men and asked to come to the courthouse. We co-operated fully,” says Weinberger, “showing identification and telling why we were there . . .

1 he deputy said we would have to spend the night in jail. We asked why and on what charge but received no answer. We refused to go. The police grabbed us and we went limp (a passive resistance tactic). We were dragged out of the courthouse, heads bouncing on the cement steps, stuffed in the police car and taken to jail. After we were about three hours in a cell they came to take our fingerprints. Jeff was first—he was dragged by means of a wristcuff, a very painful device that leaves the wrist swollen and torn for weeks afterwards.

“When my turn came I felt that considering the injustice and inhumanity ... 1 could not co-operate even to the point of holding my fingers still for inking.“ They got his fingerprints, finally, by tying him face down on the cell floor and using pliers to hold his fingers steady while they were inked and pressed on the paper.

But that was not the whole of his ordeal. “My fingers were bent back, my pants were slashed or torn off and a high voltage electric probe was applied to sensitive parts of my body,” he told a committee that Eleanor Roosevelt has organized to expose the frequent cases of collusion by state and local officials against the integration movement.

Yet the soft-spoken, mild-mannered man, w'ho is neither large nor rugged, and who, like many pacifists, draws courage from the teachings of the late Mohandas K. Gandhi, has not been intimidated by what he has gone through. Just the reverse. At the moment he’s up to his cars in plans to expand the tote bag business that has meant so much to Negroes w'ho had so little.

And the Negroes, on their part, are not being intimidated either. By the last count, several thousand of them had qualified to vote, and it looked as though the worst days of segregation might be coming to an end. 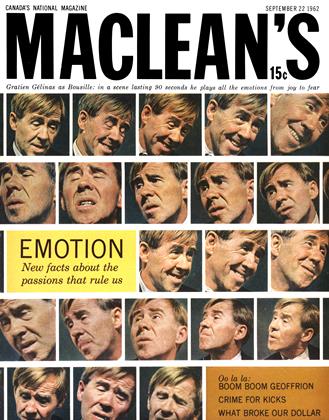