MAN, A JOHNNY-COME-LATELY to this earth, has evolved in a record 2,000,000 years or so from a slouching, apelike creature just capable of picking up a pointed stone, to a handsome, smiling astronaut capable of orbiting the earth three times before lunch and understanding a device powerful enough to unloosen our Van Allen belt before most of us even knew we had one. One day when I was feeling a long way from a smiling astronaut myself, and wondering whether man was still evolving, and, if so, toward what, I dropped in to see Dr. W. E. Swinton, formerly of the British Museum of Natural History, now Director of Life Sciences at the Royal Ontario Museum in Toronto. He is an internationally recognized authority on dinosaurs, a group of animals that evolved through 150,000,000 years, dominated the world, brayed their challenges at the edge of primordial seas and disappeared 80,000,000 years ago. It seemed to me that what happened to dinosaurs might throw some light on what’s going to happen to us.

Dr. Swinton, a slight, sociable Scotchman, told me to lire away and I asked him whether man was likely to evolve into some Twilight Zone figure—maybe something like a transistor radio attached to a power mower. He said that he doubted it.

“Our evolution will be principally in the development of our senses. They're infinitely inferior in some ways to those of many of the inferior animals. There’s one thing man has in common with the dinosaurs; unlike cats, dogs and cows, he has color vision, But his nose is more feeble than a dog’s. His sight is much less acute than that of many birds. The range of his hearing is restricted and his sense of touch often lacks delicacy. His sense of balance, the amazing faculty that tells him that he is lying on his back when he wakes up in the morning, is inferior to a cat’s. I believe that we are only at the beginning of developing and co-ordinating our senses and of appreciating much that is around us. The time will come when we’ll be able to tell what other people are thinking. There will be no need of speech. There’ll be no TV.’’

As for the physical shape of future man, there aren't likely to be many evolutionary changes, Dr. Swinton said. Unlike the dinosaurs, which died out largely because they were unable to meet the physical challenges of a changing world, man has shown an increasing ability to overcome his physical environment vthat great director of natural selection) and seems well on the way to controlling it with his present quota of arms, legs and various parts, which are ample to operate his gadgets, including his gadgets of destruction. A man

with weak arms, and even a weak mind, can operate an airplane.

On the other hand, unlike the dinosaurs, man shows a tendency to racial suicide. “Man's new environmental pressures are social,” Dr Swinton said. “The Iron Curtain isn't a physical thing, nor are labor problems or sex taboos or population pressures, yet they are sometimes as effectively inhibiting as physical environment."

Dr. Swinton was reminded of the group of lizards that evolved into birds when they began to climb trees. He told me how they developed birdlike claws to grip the swaying boughs, along with an acute sense of balance and sharpened eyesight to hunt the new types of food found among the leaves and in the bark, and how they learned to leap long distances from branch to branch.

As for the dinosaurs, which so dominated the earth that they held back the evolution of other mammals, including man, for a hundred million years, all of them weren't giants. Some were no bigger than fox terriers. Others were as long as two Greyhound buses put end to end and weighed as much as sixteen Chevrolcts and probably had to stop and rest after a short sprint. Fossil remains of the largest types are found in Canada, Russia and the United States.

Dinosaurs as a group demonstrate a large number of biological principles in the field of evolution, and provide the earliest known case of bone cancer (found in a dinosaur that lived ninety million years ago in the vicinity of Hungary). They have also been said to illustrate a peculiar phenomenon known as the old age of a phylum, in which an entire group, as a group, shows symptoms of old age—the young are born toothless. The dinosaurs were too dull-witted to find new pastures when great geological and climatic upheavals changed their world. They were superseded by other animals that were better hunters and runners.

Dr. Swinton said that there is some possibility that the insects will supersede man. “Evolution is just like a football game,” he said, but hastened to point out that the fate of man, like the fate of the dinosaurs, is still essentially a mystery to science. “My own senses show no signs of being further developed.’’ he said, trying to find a book on his shelves. He came up with a limp Bible, from which he read from Ecclesiastes nine, verse eleven, in a nicely articulated voice;

“I returned, and saw under the sun, that the race is not to the swift, nor the battle to the strong, neither yet bread to the wise, nor yet riches to men of understanding, nor yet favor to men of skill; but time and chance happened to them all.” ★ 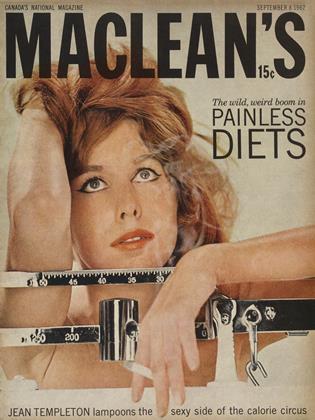