George Hogan Jr. and Terry Nugent are moderately important Conservatives who have embarrassed very important Conservatives by saying out loud what they think of the Diefenbaker government’s foreign policy. On issues like Cuba, Canadian-U.S. relations and nuclear arms for Canada, Hogan is further right than the party and Nugent is further left than they thought any Tory could possibly be — until last October. On October 23, in the worst hours of the Cuban crisis, Nugent told the Commons that it was time to let the Americans know that we want no part of their “unprovoked” aggression against Cuba. Two weeks later, in Toronto, Hogan said it was time to let the Americans know we are their friends by breaking off diplomatic relations and trade with Cuba.

In Ottawa, Hogan's outburst hurt more than Nugent's. After all, Nugent, the member for Edmonton-Strathcona, is the son of an Edmonton socialist, but Hogan has always been a loyal, close-mouthed party man. He is the party’s vice-president and was executive assistant to the prime minister in three elections.

The first party reaction to the Hogan mutiny was, “No, not George — the papers must have got it wrong.” (But Hogan had made sure the papers didn’t get it wrong; hours before speaking at a small closed meeting of young Conservatives, he sent the Toronto dailies copies of his speech.) To Nugent, the prime minister merely expressed doubt about the future of a politician who has unpopular convictions. To Hogan he is reported to have said, “And I treated you like a son.” Ten days later Hogan announced that, for the first time in his life, he wanted to run for public office; he would try for the Tory nomination in the provincial riding of Toronto-Woodbine. A week after that he was nominated. HARRY BRUCE

victory in last November’s provincial election strengthened the trend now known as ‘the quiet revolution,” but it also shored op the reaction to that revolution. One of the most noticeable ways in which that reaction has cropped up is in increased talk about “anti-

clericalism." which the reactionaries see as an integral part of the revolution.

In Quebec “anticlericalism” means being against a particular kind of clerical influence — the kind of secular influence the church has held in Quebec's past over such matters as education and politics. In this context, “anticlericalism" has been on the rise for several years. More and more people in the province have reached the conclusion that the church's real hope for the future lies in stepping back from its secular positions and holding onto its sacred ones. These declared “anticlericals" include such unlikely bedfellows as the group of Montreal intellectuals who edit the little magazine Cité Libre, a number of academics and professional people who belong to an organization called Le Mouvement Laïque de la Langue Française (which works for less religious domination of the schools), a number of priests (particularly Dominicans) and, to a significant degree, Paul-Emile Cardinal Léger, the archbishop of Montreal.

On the other side are most of the province’s bishops, some organizations like Les Ligues du Sacré Cœur, and, most notably, a right-wing. Birch-like movement imported from France and called Cité Catholique.

One field where these sides clash frequently is the daily press. The right wing has often charged that both of Montreal’s French dailies are riddled with “anticlericals.” (And, in context, these charges are based on some facts.) When the city’s third (and at least equally anticlerical) daily. Le Nouveau Journal, collapsed in early 1962, it was generally regarded as a partial victory for the forces of reaction.

Last month, in the wake of the Liberal victory, the right-wing moved to fill the gap left by Le Nouveau Journal by announcing its own paper. A group calling itself, ironically. Les Amis de l’Esprit Nouveau, announced that it was out to launch a daily. Les Amis made it pretty clear which side they were on by pointing out that some of the news stories in the two existing Montreal dailies would “lead to a revolution where the majority will become slaves to their new totalitarian masters.” They also described Cité Libre as “counterchurch.” Whether their paper can succeed where Le Nouveau Journal failed will depend, first, on whether Les Amis can raise the million dollars they say they need. If they get the money and the new daily appears, it will be the strongest overt signal yet of the reaction to Quebec’s revolution. PETER GZOWSKI

Toni Symons is almost a stereotype university president. His family is notable in both . business and letters. He studied history at Oxford. He smokes a pipe, wears vests, drinks a little wine and enjoys good books and Canadian art. But where Symons has it over all other Canadian university presidents is his youth. He’s thirty-three.

Symons' university — Trent, in Peterborough, Ontario — is not open yet. His job is to deliver it by 1964 and, in this, he is a pioneer of what may soon be a whole new profession in Canada — planning universities. It’s not entirely new to Symons. As dean of the University of Toronto’s men’s residence, he changed it from something resembling a Borstal institution to a community of students.

The university Symons builds at Peterborough will have no more than 3,000 students; it will be intimate and independent. He hopes to have one professor for every twelve students. Both the curriculum and sports will be traditional — heavy on pure sciences, liberal arts, rowing and hockey; light on the more v fashionable social sciences and rah-rah spectator sports. It will be, Symons hopes, a family of scholars, not a degree mill. Trent University,

under young President Tom Symons, will be “so old-fashioned it may seem original.”

The anti-fluoride citizens in Metropolitan Toronto — there are 171,288 of them — are the major prospects for the men who sell machines to take fluoride out of water. That many people voted No in the recent fluoride plebiscite and lost (Toronto was the first big city in Canada to vote for a fluoridated water supply). Now, unless the Nay voters buy a defluor ¡dating gimmick or bottled water, they’ll have to swallow “the poison”

— as rabid opponents of fluoride call it — like everyone else. A week after the vote, the Metro Works Department was still being harried by angry queries about how to undo at home what the voters had done at the polls. At that time there was only one Toronto firm

— but it’s a safe bet there are as many more to come as the traffic will bear — which was prepared to install a defluoridator right away. It had sold exactly one unit.

The firm is Sloan Water Conditioning Ltd.. and the defluoridator is the Culligan Water Conditioner. It costs $75, with tap; the tap would be the only one in a house for drinking water and cooking since the cost of defluoridating all household water is prohibitive. The filter in the Culligan product, according to the Sloan people, is “activated bone ash plus some secret ingredients to keep it sterile.” It costs about $5, is good for two years of normal use, and is supposed to remove about ninety-eight percent of the fluoride.

Another Toronto firm, Ozopure Drinking and Distilled Water Ltd., hopes to market similar devices early this year but it expects to do better with its purified bottled water ($1.75 for a five-gallon jug). There is one more course open to people who hate fluoride, the one that two Toronto women told the city they would follow if all else failed. They’re going to move out of town. SHEILA RIERAN 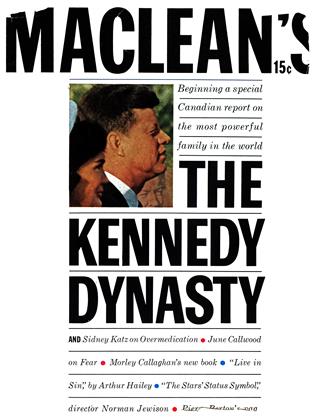