BROADLY, THERE ARE TWO WAYS to tackle the problem of helping a primitive folk, whether stone-age Eskimo in the Canadian Arctic or bronze-age tribesmen in Africa. One is to seek ways of using traditional skills and folkways, adapting them to modern needs as opportunity offers. The other is to move the people straight into a twentieth - century environment, teach them the skills they need for the new jobs, and leave it mostly to them to do their own adjusting. In two African countries within about a week I saw examples of each method, and the contrast was interesting.

THE FLAWS IN "SELF-HELP”

In Tanganyika I went on a two-day tour of “self-help projects” in African villages, sponsored by the government department of community development. The theory is that the villagers should be encouraged to make for themselves, under the guidance of welfare officials, things their communities need.

We set off first to inspect a dispensary that was being built by, and for, a fishing village of about fifty families. It turned out to be an enclosure of four walls about four feet high. About a dozen men were mixing mortar and laying more concrete blocks on the walls. The odd thing was, one of the walls included a marble cornerstone, laid by President Julius Nyerere in January, 1961.

I asked how long the work had actually been going on. Answer, about two weeks. What caused the two-and-a-half-year delay since the

cornerstone laying? Well, there had been a misunderstanding. When President Nyerere laid the cornerstone, the villagers thought the government was going to build the dispensary. It took time to explain that they were supposed to build it themselves, and more time to explain that nobody was going to pay them for their work. It seemed to me the villagers had a point. The new dispensary is a mile and a half from their village and, if it is ever finished, will be a transport problem for the sick who need it. Also, there is already an empty building right in the village, the local office of the ruling political party TANU, which could well do double duty.

After lunch we drove fifteen miles inland to the town of Morogoro, whence we were taken by Land Rover the next day to forest villages that an ordinary car cannot reach. This is fairly wild country — a lion was shot in Morogoro the week before our visit, and a few months earlier a lion had killed a man on a forest path about ten miles away. In the villages we saw building projects something like the dispensary

— community halls, school buildings, new houses. The new houses looked much like the old houses they replaced, which the villagers had built without help. The community halls were in various stages of completion; it wasn't quite clear to me what would be done in them when they were finished, or why concrete-block buildings were needed in country where the temperature seldom goes below seventy.

The young man who was guiding us earns $120 a month, plus a small car, planning these self-help projects. His boss earns $180 a month. Their unit includes one woman to advise mothers, or explain to midwives why they should wash their hands before delivering a baby. The population this unit is trying to serve numbers 274,000, many of them in villages to which there is no road, only a footpath.

The contrasting visit was not to a welfare project at all, but to a commercial operation

— the Ford Motor Company’s assembly plant in Salisbury, Southern Rhodesia. It happens to be managed by a Canadian, Dennis Snowdon of Ottawa, and he showed me around with a good deal of pride.

THE PROFIT IN GRUEL AND A SIXPENNY LUNCH

About three quarters of Snowdon’s work force are Africans, who fill the ordinary assembly-line jobs. The supervisory staff are white, not because the plant draws a color line but because only whites (so far) have enough mechanical knowledge and aptitude to handle supervisory jobs. As Africans qualify they can be promoted, but Snowdon says there’s no sign of pressure in this direction. The Africans seem content with their wages (which are low by Canadian standards but about double the Rhodesian average) and dislike being moved out of familiar jobs. They don’t seem to mind the monotony of assembly-line work.

“I’ve got on my desk the productivity records of every Ford plant in the world,” Dennis Snowdon said, “and ours is good — better than Oakville, Ontario, as a matter of fact.”

It takes longer, he explained, to train an African worker than one who grew up in the machine age, but once trained the men work well and patiently. More than plant skills have to be taught, though.

“We found our work force tended to run out of energy in the afternoon, because they came to work without eating ;— they were used to eating only in the evening. So we start them off each morning with a cup of a kind of gruel, and we give them a lunch for sixpence that costs us about three times as much.”

But except for these practical things, the workers get no indoctrination and no restriction. They have to be fully literate in English, because otherwise they can’t read the instructions on which their work depends; no other

special stipulations are laid down. The plant has had no labor trouble of any kind.

Dennis Snowdon doesn't pretend to be either a sociologist or a politician, but he thinks modern mass production industry is the answer to the social and economic problems of Africa. To a casual visitor it looks at least more promising than “self-help” and “community development.” 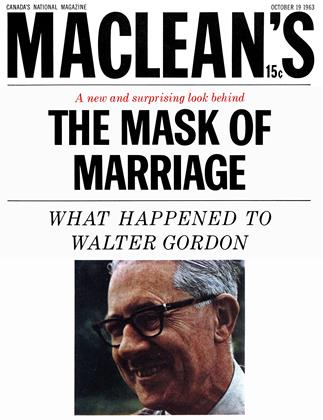