A Winnipeg Baptist who says he would soon be relegated to "the crackpot fringe of any superchurch” lists the advantages of variety, and explains why he feels a union of all the churches would, in the end, weaken Christianity

CHRISTIAN UNITY and church union have become big news. The Vatican’s Ecumenical Council and more recently the interdenominational World Conference on Faith and Order in Montreal received unprecedented front-page attention. Religious leaders have been taking it so much for granted that church union is a precious goal — indeed, God’s wish for the churches — that it may seem foolhardy to oppose it. But I know I speak for many churchmen and laymen when I do so.

Once before, in the Middle Ages, the idea of a universal church was close to being a reality in the West. The result confirip^d the truism that power corrupts. Oppression and persecution replaced the charityof Christ as the policy of the church to such an extent that the church historian Johann Neander described the era as “the devil’s millennium.” (Significantly this monolithic Christianity was not a union of different denominations; it was the church as it existed before reform-minded groups broke away under leaders like Luther and Calvin, and thus probably saved Christianity from collapsing under the sheer weight of misused power.)

No church is likely ever again to claim power of life or death over men’s bodies. But the churches still hold (none too securely) the

franchise on men’s souls, and I am convinced that hard days of subtle persecution would lie ahead for all whose conscience could not accept the superchurch.

The more evangelical con^TTfetuion#1 like the Baptists and Methodists have had to struggle for generations -to establish their “respectability” andKtfieir rights as religious bodies. What Avouid happen to them under a church unión to which they did not belong?

In the first place, so strong is the propaganda that presents union as the ideal solution to the problems of Christianity that we who preach that Christianity is essentially rebellion against complacency would probably be regarded as a crackpot fringe that insisted on remaining outside of orderly, organized Christianity. We could survive this. After all, we have always had to contend with this kind of criticism from the powerful forces of “rational” Christianity. But there is no doubt that church union would make it difficult for us in material ways.

We have long known, for example, that even partial unity tended to create a measure of monopoly in Christian teaching. An instance is the National Council of Churches in the United States, which has been able to gain farreaching control over such church matters as free radio and television time for religious

broadcasts, and the allocation of building sites for churches in new housing developments. In both these respects the evangelical churches have suffered because they do not belong to the “union.” A world church might make administration and organization more efficient for its members — at the expense of denominations that remained outside the organization.

But would a union of churches be as zealous and effective as a disseminator of Christianity? Take the important matter of winning converts to Christianity. Advocates of a world church say that missionary work is hindered because potential converts are puzzled and discouraged by the division of Christianity into competing sects. As Dr. Eugene Carson Blake of the U. S. Presbyterian Church put it, “The divided state of the Christian church is blocking its mission.”

I suggest that union has a more deadening effect on missionary zeal than does “the divided state of the Christian church.” Certainly this applies to the number of missionaries in action. In 1936 the United Church of Canada, formed eleven years earlier by the merger of the Methodist, Presbyterian and Congregational churches, had 452 missionaries in the field. By 1960 the number had dwindled to 245.

In the United States the Congregational

Results of union: “nonentities and platitudes ... a colorless ministry and dead conformity”

Christian churches, product of another church union, had 495 missionaries in 1936; in 1963 there were 364. I maintain this is because church mergers usually mean the surrender of some of the cherished convictions which send men and women to the ends of the earth with what they deem to be a vital message.

On the other hand, denominations outside the union-minded groups have greatly increased their mission forces. In the same period when the two merged churches were losing missionaries, the Southern Baptist Convention's missionary army rose from 405 to 1,377; the Free Methodists from 81 to 161; the Christian and Missionary Alliance from 447 to 824, and the Church of the Nazarene from 88 to 400. Today only thirty-eight percent of all U. S. foreign missionaries are from denominations affiliated with the National Council of Churches. 1 estimate that in Canada an even smaller percentage of foreign missionaries are related to the Canadian Council of Churches — despite the fact that the vast majority of Protestants belong to member churches of the council.

On the home front too the ecumenists see church union as a solution to the problem of the dwindling adherence to Christianity. They regard the existence of a variety of churches in the typical Canadian community as a wasteful duplication that the superchurch w'ould eliminate. But the problem is not too many churches: it is too few people inspired to attend them. I know of no town in Canada w'here if everyone went to church, there would be enough church buildings to hold them.

Church unity isn’t going to bring more people to church. On the contrary, religious censuses show that the very denominations that are pressing for church union are the ones that are losing ground to the more evangelistic and individualistic churches. The ecumenists, I believe, w'ould suppress religious individuality and make an ideal of conformity. The cherished right to dissent could well become a luxury in the sphere of religion. In fact, church union advocates even describe de-

nominational distinctiveness — those cherished convictions for which men were once willing to die — as “the sin*; which divide us.”

1 his attitude is precisely the reason why the evangelical churches are unwilling to accept church union. What the ecumenists call a sin, we call truth. The ecumenical movement in its present form displays an indifference toward scriptural doctrine and a hostility tow'ard the historic Christian acceptance of the Bible as our authority on faith and morals. In their voluminous reports the ecumenists pay lip service to the Bible, but in practice ritualism and rationalism seem to have usurped the place of the Bible, and dead conformity is preferred to the living Word.

As long as a minister or a church drifts along in an accepted rut. all is well. The pastor will be respected and he will probably end up with an honorary divinity degree for “outstanding contribution to the life of the community and the church as a whole.”

But he must not dare to be distinctive. This is a crime against ecumenicity. The policy of the churchmen who favor church union is to sweep all differences under the carpet or else gloss them over. 1 maintain that this is neither sensible nor Christian. It has resulted in a colorless and meaningless ministry of nonentities and platitudes. Vigorous evangelism to win people to Christ seems to be nonexistent, and personal spiritual development seems to be frowned upon as some undesirable carry-over from Methodism. In the process, the ecumenical-minded churches have lost contact with the people. Most who profess to be church members could not care less if there were one world church or not; for the church they know has not really invaded their lives with the message they need.

I am a Baptist and do not regard that denominational label as heretical. I find myself spiritually in accord with every person of whatever race and denomination who believes in Christ. We may have differences, and profound ones, about some things but we are all united. No amount of legislation can make that unity more a fact and none can bring it into being if it does not already exist. By all means let the men of the churches do all they can to foster mutual respect among churches and individual Christians. But this will never come about by minimizing the shadings of conviction and herding the denominations into one superchurch. ★ 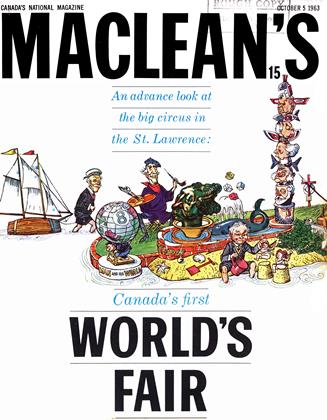