THE SONS OF FREEDOM have opened a new front in their apparently endless war against the B. C. government. After the failure of a hunger strike that claimed at least one life they hope to carry their grievances to the Supreme Court of Canada. The first, and probably the only, casualty in the hunger-strike campaign was Paul Podmorrow, a young Freedomite inmate of Mountain Prison near Agassiz, B.C., who died early one morning in August after a fast that lasted thirty-one days.

THE FAST THAT DROWNED IN CALORIES

A month after Podmorrow's death the hunger strike had become a half-hearted parody. Inside the prison the strike was still officially in progress but “forced feeding” of the hundredodd inmates was a hollow ritual. The prisoners willingly gulped down calorie - rich mixtures of milk, glucose and eggs twice a day, as long as prison guards guided their hands to their mouths. It was no longer exactly a fast unto death. As many as ten prisoners at a time have been in hospital for intravenous feeding but two women prisoners, after weeks of fasting, were reported to have gained weight.

Outside the prison, where several hundred Freedomites have camped since late August, the hunger strike has been almost abandoned. Early in October only a few old people were still fasting. The rest were busy improving the ramshackle tents, lean-tos and huts that line the road outside the prison gate.

Mrs. Florence (Big Fanny) Storgoff, the current spokesman for the sect, says the hunger strike was successful, that it drew public attention to the Freedomites’ grievances. But if trading lives for publicity was its aim the strike was a bad bargain. Podmorrow’s death received little attention in Vancouver papers, and the death of an elderly woman in the tent-town several weeks later was attributed by an inquest to natural causes and not to malnutrition.

If the Freedomite martyrs were pretty well ignored, the sect’s latest grievances received even less attention. This is partly because decades of arson and terrorism in the Kootenays have frozen public attitudes into a state of permanent hostility. But it’s also due to

honest puzzlement. Asking a Freedomite what he wants and how he proposes to get it by burning down his house is a surrealistic exercise. Even Harold Winch, the underdog's MP from Vancouver-East, emerged completely baffled from a meeting with the prisoners to pin down their complaints. Basically, though, the Freedomites’ case is that many of the hundred-odd inmates of Mountain Prison are serving jail terms for crimes they did not commit. They claim that the special Doukhobor squad of the Royal Canadian Mounted Police, aided by a former Freedomite leader, persuaded them to make false confessions.

The Freedomite claim was aired in a test case before the B. C. Court of Appeal last June, when a Freedomite named George Demenoff tried to get his conviction quashed on the grounds that his confession was improperly obtained. The appeal was dismissed by a twoto-one decision, but the dissent of Mr. Justice Davey encouraged the Freedomites to try the Supreme Court of Canada where the case will probably be considered in November, and contested by the office of Attorney-General Robert Bonner.

A shadowy Vancouver organization called The Human Rights Association is soliciting funds to pay for the defense, and issuing pamphlets which the Freedomites distribute. (Sample quote: “Asking Mr. Bonner and Bennett to handle this situation is like asking Hitler and Eichmann to take care of the Jews.”) Says William Carson, a Burnaby contractor who heads the association, “If this case succeeds, all the other cases will be reopened and Mountain Prison will be emptied.'’

This is what the Freedomites have been demanding ever since Labor Day last year, when seven hundred of them marched away from their burnt-out homes in the Kootenays and announced they were on their way to Mountain Prison to be near their men. The wandering sect passed the winter in Vancouver, living in rooming houses and skidroad hotels.

IT ISN’T MUCH BUT, FOR NOW, IT’S HOME

The Freedomites left Vancouver late in August, after word reached them of the hunger strike inside Mountain Prison. About six hundred Freedomites, most of them women and children, converged on the road leading to the prison and they’ve been there ever since. They’re working hard to make their campsite comfortable but a winter spent under such conditions will mean hardship for all of them and probably death for some. Some have overlaid their tents with plastic sheeting for protection against the rain. Others have chopped poles from the nearby forest, nailed them into the skeletons of huts, and covered them with cardboard, canvas or old pieces of sheet metal. They’ve dug a dozen privies, sunk holes in the ground beside the road to tap swamp water for washing, and bored wells for drinking water.

Sometimes the campers climb a small hill where they can see the faceless grey buildings of the prison compound, and occasionally catch a glimpse of their imprisoned brothers and sons. As always, no one knows what will happen next. Big Fanny says they won’t go home to Krestova till their relatives are free. But this time the authorities refuse to bargain over the sentences of convicted criminals, as some previous B. C. governments have done. Whatever their next move, these six hundred people — outwardly gentle, hard working and serene — are becoming a wandering, homeless tribe. Their trek is now more than a year old but in the tent-town outside the gates of Mountain Prison, nothing was done to mark the anniversary. “Why should we celebrate?” asks Big Fanny. “For us, this is a sad time.” 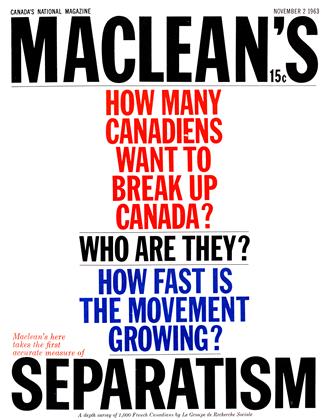