Bargain day com es to the art bizor does it? BARBARA MOON December 14 1963

SINCE THE ADVENT of the Affluent Society fine art has been moving so briskly in the little galleries and the big auction rooms that sooner or later it was bound to challenge the ingenuity of the mass-merchandising boys. A year ago Sears, Roebuck, the U. S. mail-order house, decided it might be possible to build real sales volume by using a personality tie-in and hired Vincent Price, Hollywood actor, TV performer and art collector, for the job, which was, approximately, to make a wary public feel that he, Price, wouldn’t let them be fooled if they ventured into this new field. Billed as The Vincent Price Collection of Fine Art — “Each work personally selected by Mr. Price” — some seventy-two shows are now being shuttled around Sears' retail outlets, replenished when necessary from a 35,000-item inventory (old masters, modern masters, native artists, fifteen dollars to nine thousand dollars, nothing larger than forty-eight inches, positively no reproductions). The new' line is proving a fair success — five thousand works have sold in a year — and this July the Sears stepchild in Canada, Simpsons-Sears, decided to follow' suit, only including some Canadian art. In August they imported purchasing-agent Price for seventy-two hours to make his personal selections from six-hundred-odd w'orks a Toronto dealer had assembled in three w'eeks of phoning and talking. Price had Simpsons-Sears buy four hundred of them outright, for a hundred thousand dollars. Since he also had seventy-two of these shipped off to add to the U. S. inventory and since this is supposed to be just a beginning, there has been a certain shrewd enthusiasm for the project in local art circles. (Some of it was quite shrewd: dealers, through whom many purchases were made at a twenty percent discount, privately admit they used the occasion to unload some dogs. At least one jacked his prices before giving the discount and several artists happily cleared their cupboards of unsold early work.) One Toronto commentator announced that it was “the biggest shot in the arm (Canadian painting) has ever had.”

However it was less cultural chauvinism than curiosity about how the mass merchandising of art worked that took me, a few weeks ago, to the suburban Ottawa shopping plaza where Simpsons-Sears was launching its third show in a three-day, three-city debut of The Vincent Price Collection in Canada. In midNovember the remnants of the three shows were to be topped up from the stock on hand and moved from Ottawa, Hamilton and Winnipeg to Edmonton, Calgary and Vancouver. The agreement with Price guaranteed his presence at the openings, and in Ottawa he had contracted to open the show at 1 1 a.m., and mingle with the customers for exactly fifty minutes.

Clutching a sales folder that listed twentyfour American works, forty-eight European works and eighty-five Canadian works including one Riopelle and nine by someone named Jack Beder, I pushed my way into a sizable crowd of matrons, pre-teenagers and men wearing carnations waiting before a white satin ribbon at the top of an escalator. At exactly 11 a.m. a man wearing a pink carnation stepped forward and introduced Price, who was wearing a red carnation even though he was unmistakable as the flouncy mandrake villain of more than a hundred horror films. Radiating boyish charm he said, “I’m terribly excited to be here today and receive this warm welcome,” and snipped the ribbon. The crowd surged forward into an arrangement of flats hung with paintings. A man wearing a white carnation paused to explain that pink carnations were senior executives of Simpsons-Sears and white carnations were sales clerks. He himself was from the accounting department.

I got pushed into the exhibit by the crowd and fetched up near a lanky, boyish executive, without carnation. I managed to recognize him as James Button, the Chicago-born, Searsbred young president of Simpsons-Sears. “Vince doesn't agree with me,” he said chummily, “but I say we've got to offer potboilers too. Right now this art thing is exploratory but ask me a year from now and v/e’ll be consumeroriented. We'll know, for instance, exactly how many people buy strictly on the artist’s name.” He paused to watch a “Sold” sticker being affixed to the seventy-two-hundred-dollar Riopelle, and went on, “I arrived at this art thing personally through taking up painting myself about a year ago. I'd rather paint than play golf now. Have you taken a look around yet? Get the feel of the thing.” As 1 moved off obediently Button was saying to a pink carnation, “I’d say the most marketable one I’ve

I studied an A. J. Casson, listed at two hundred and fifty dollars, that I had seen in a Toronto gallery for a hundred dollars less and a Harold Town at exactly his going price, and then cornered a snub-nosed, bearded young man whom Button had pointed out to me as Arnold Mazelow, his personal picture-framer and art dealer in Toronto, whom Button had got to round up the original selection for Price’s scrutiny. He was wearing a white carnation. “I simply looked for the saleable at the right price,” he said. “Primarily I wanted to see artists who had had no publicity or major exhibit, like Jack Beder of Montreal who's been around since 1931. He brought us thirty-five paintings and we made him an offer on the lot. There are no David Milnes or Group of Seven. Some of the artists said ‘I don't want to be associated with a commercial enterprise’ but some of the biggest people gave us no trouble. Sure, you could walk into any gallery and get the same thing for the same price. Primarily what we’ve got to offer is Simpsons-Sears integrity, their money - back guarantee. Plus some people are timid about walking into an art gallery. Plus people remember Price from The $64,000 Question where his category was art. The ones that don't sell will go to the Sears shows in the States. There'll never be any markdown, that's policy. If the worst comes to the worst we might donate them to some deserving museum.” Someone jostled him and he remarked, “This is as bad as Hamilton. It was a real floperoo — two thousand people and most of them just autograph hounds.”

I fought my way through to Price, who was radiating boyish folksiness. He said, “Gee whiz, 1 don't get this attack on the woman who wants a picture to match her drapes. She’s paid a lot for her drapes and a painting is actually the ultimate in home furnishings. We try and frame them beautifully so they represent a decorative item in your home as well as a work of art.” He broke off as a pink carnation hastened up to tell him, “You can get out of here now.”

Pushing my way out in Price's wake I spotted a smart, navy-blue-clad w'oman, Mrs. Walter Gordon, wife of the minister of finance. She was buying tw'o small sketches. The pink carnation spotted her too, stayed Price's progress with a touch on the arm and hurried over to Mrs. Gordon. “Did you meet Mr. Price?” he asked urgently. “No” she said, and went on arranging to have the paintings taken down to her car. ★ 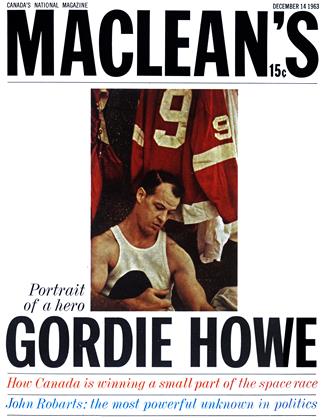