IF SOCIAL CREDIT is the government that gets things done in British Columbia, Gordon Merritt Shrum has emerged as the man who does them. Shrum, a blunt and balding physicist with a knack for completing big jobs in a hurry, is managing both of the government’s biggest construction projects: the Peace River power development and Simon Fraser University. Command of these schemes — total construction costs will amount to at least $715 million, maybe a billion — makes Shrum easily the biggest builder in British Columbia. And despite

his claim that he has no time for politics, it’s involved him in the two areas where political controversy is hottest in B. C.

During September’s election campaign the most-talked-about and least-understood issue was Premier Bennett’s master plan for power development. This involves B. C. selling enough Columbia River power to the Americans to pay for the dams Canada must build under the Columbia River treaty. To fill the vacuum created by exporting this power Bennett decided to develop the Peace River — and expropriated the B. C. Electric when its management refused to go along with the idea.

Bennett’s political enemies condemned the master plan because, they said, it ignored alternatives that would supply enough power at less cost than the Peace. The debate, as it turned out, was wholly academic. While Conservative leader Davie Fulton and others condemned the Peace scheme, nine hundred workmen were racing to complete three diversion tunnels which would drain the riverbed to allow

construction of the giant dam. Their absolute deadline was Sept. 30 — which, oddly enough, also happened to be election day.

As co-chairman of the B. C. Hydro and Power Authority, Gordon Shrum made sure the deadline was met. Sixteen days before the election he stood by at the construction site, 580 miles north of Vancouver, while Bennett pulled a switch that triggered seven tons of dynamite. The explosion blasted open the tunnels and carried the Peace scheme past the point of recall. Shrum views the Peace job as a succession of deadlines, political or otherwise. All of them must be met, he says, if Vancouver is to avoid a power shortage by 1968.

Building universities, he says, is the same as building dams — only more fun. As chancellor of Simon Fraser University, he faces a deadline as rigid as the Peace project’s. If SFU isn't ready by September, 1965, as many as three thousand students will have no place to go. Today, the university is a bald patch on the top of a mountain in Burnaby, next door to Vancouver. But when it’s completed, Shrum allows it will be one of the most spectacular campuses anywhere.

Architects Arthur Erickson and Geoff Massey arc appalled by Shrum’s pace. “It generally takes about two years to complete the design of a university,” Massey says. “We’ve got to do it in four months.” Shrum is excited at the prospect of starting a university from the ground up. At various times he has mentioned

all sorts of academic innovations, from yearround classes to televised lectures to baby-sitting facilities for married students. It’s likely that SFU will be strongly utilitarian. Shrum once observed that Canada needs more engineers and fewer interpretive dancers. And although he plans to take a back seat to newly appointed president Patrick McTaggart-Cowan when the construction phase is over, it’s safe to predict that engineers will outnumber interpretive dancers at SFU.

THE DISTINGUISHED CAREER OF A CAMPUS HUSTLER

Shrum’s abrupt manner won him few close friends during his thirty-six years at the University of B. C., “but if you wanted anything done in a hurry,” a UBC official recalls, “you always went to Shrum.” Despite a brilliant research record, Shrum soon became better known as a faculty-raider and administrator. He joined the physics department as an assistant professor in 1925 and headed the department by 1938. But his influence was felt all over the campus when he ran the extension department for sixteen years, headed the COTC for nine, ran the faculty of graduate studies from 1956 until his retirement two years ago, and served on thirty of the committees that proliferated at UBC under president Norman MacKenzie. When the postwar influx of veterans threatened to engulf the campus, he moved hundreds of surplus military huts out to Point Grey, and had ornamental flower beds planted around them before final permission for the transfer arrived from Ottawa. “Some

people say we stole those huts,” he says, “and in a sense they’re right.”

The B. C. government noticed Shrum in 1958, when the B. C. Research Council, under his direction, rushed out a report for the cabinet on a controversial sewage plant. Bennett then asked Shrum to head an inquiry into charges that the government’s power commission was improperly financed. Predictably, the report bounced back in record time. It recommended establishment of an energy board to determine the best sequence of B. C. power development. Bennett adopted the suggestion and picked Shrum as chairman. The only major task Shrum’s board performed was to compare power costs on the Columbia and Peace Rivers. Shrum reported that the costs were “practically indistinguishable” — and so Bennett's two-river policy was launched. This involved seizing the BCE, and finding a new man to run it. Who else but Gordon Shrum?

All these tasks have earned Shrum a reputation in some circles as an excessively obliging chore-boy. Social Credit supporters are not popular at UBC. Mrs. Ralph Loffmark was snubbed to the point of tears by faculty wives after her professor-husband won a seat as a Socred MLA. Thus, some of Shrum’s old colleagues regard him as a defector. Shrum rejects the idea: “I’m not pals with the premier. In fact, I’ve only been inside his office once in the past two years. Anything I’m doing for the government is just to get the job done.” 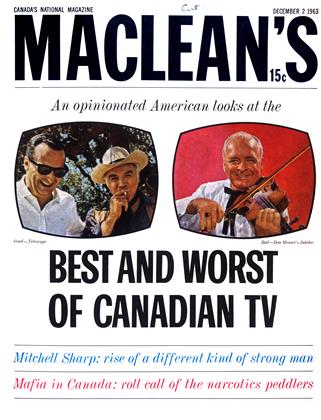