IS A DETAILED KNOWLEDGE of wolves worth $200,000? This is a question the Ontario government is now trying to answer, and wishing it didn't have to. Whatever the answer, it will leave a lot of people mad. Ontario answered it once, six years ago, with an unequivocal “yes,” and put government biologists to work on the most intensive program of wolf research — how they live and how they affect other forest animals — ever undertaken anywhere. Now, with three more years to run and the research reaching its last stage, the government is being forced to reappraise it because of angry opposition from wolf-haters throughout northern Ontario.

But the wolf and wolf research, it is turning out, have friends. Influential groups like the Conservation Council of Ontario and the Federation of Ontario Naturalists are urging the government to get on with its research, fight off the grassroots hysteria that is whipping like a forest fire through the northern wolf country, and leave the wolves alone until there is scientific evidence on which to act.

The trouble started last spring when some table-thumping woodsmen and their provincial members of parliament appeared before a legislative committee and condemned the wolf study. (“A lot of hogwash from armchair biologists.”) The research defenders jumped in with language politer but just as firm.

For northern outfitters, hunting camp operators, guides and trappers, to whom deer herds are as good as money in the bank, wolves offer no mysteries worth studying. They simply point out that wolves kill deer. They argue that since man wants the deer for himself, this is all the evidence we need, a prima facie case against the wolf and grounds for his extermination. They bolster it with claims that deer are disappearing, hunting is getting poorer, and the culprits are all those wolves.

SURE WOLVES KILL DEER. SO DOES SNOW

The case the biologists are trying to get across is that we must look deeper than the fact that wolves kill deer. The number of deer that survive each year in a given area is the result of a complex interplay of factors; the biologists claim the most important factors in northern Ontario have little to do with wolves — they’re snow depth and the availability of winter food. These factors place a ceiling on the deer population that a region can support and the surplus produced every year must be drained off by natural factors — if hunters and wolves don’t do it, disease and starvation will.

The truth is that deer have never had it so good; they are far more numerous in Ontario today than in pioneer times. Deer survive in winter by browsing twigs, and they can live

only where young forests and forest edges provide shrubs and low branches they can reach. As a forest matures, its low branches and undergrowth are shaded out, and deer must decrease or even disappear. Man, by cutting timber and creating young new forest, has greatly extended and improved deer range. One dramatic result has been that deer in the last half century have extended their range far into northern Ontario where there were no deer originally — and they have managed to do it. incidentally, in the teeth of all those slaughtering wolf packs, because this was prime wolf country before the deer ever got there.

But despite what the tourist literature says, northern Ontario can never be as good deer country as, say, Pennsylvania. The deer is a southern animal adapted to survive best where there is little snow. The deer of northern Ontario are in a constant seesaw battle with natural elements to hang on to their newly acquired territory. The major struggle comes once or twice every decade when winters of abnormally deep snow make it difficult for deer to spread out and find browse. Thousands starve.

All this means that deer numbers in northern Ontario inevitably fluctuate. They decline as forests mature in one region, while increasing somewhere else where fire or timber cutting have improved their range. But wolves, because their deer kills are dramatic and memorable and often done openly on exposed lake ice, are the scapegoats.

Deer in the region from Sudbury westward to Sault Ste. Marie are declining because more and more of the forest there is getting too old for them, and the decline has been accentuated recently because three of the last four winters have been winters of heavy snow. Meanwhile, in the Kcnora district of northwestern Ontario where lumbering practices are favoring deer and there has not been a bad snow winter since 1956, deer are now' so numerous that the hunting season has been lengthened in an effort to reduce them before they eat themselves out of house and home.

There are times and places, undoubtedly, says Dr. Douglas Pimlott, the former director of Ontario’s wolf research program, where wolves are a serious competitor of hunters and occasionally even a menace to deer populations. This can happen where hunters by themselves are capable of taking a heavy deer toll — something that hunters don’t usually do. And it can happen where deer are starved by a bad winter but the wolves are able to maintain their numbers by feeding on a buffer species like moose, thus making the normal deer-wolf balance top-heavy with wolves.

The biologists want techniques and information by which they can recognize situations like this. They do not yet have them, but they are getting them. They foresee a time when the $40,000-odd per year being spent now on wolf bounties in the province — an expenditure spread out so thinly that only the taxpayers and not the wolves suffer — will be concentrated instead on reducing wolves in the trouble spots where wolf control is really needed. And everywhere else, if the biologists and conservationists have their way, we’ll leave the wolves alone to howl at the moon and go on harmlessly killing their share of deer. They were doing it for thousands of years before man came along with his Bambi-inspired love for deer and his Red Riding Hood-inspired hate for wolves. And the deer for all that time seemed to have managed well. 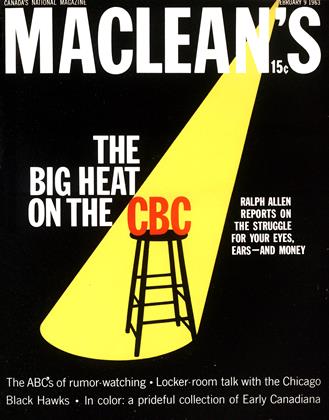