Britain’s advice to Canada: put your money where your mouth is

WHOEVER COMES TO LONDON in May, as Canada’s Minister of Trade and Commerce, to the meeting of Commonwealth ministers that will precede the GATT conference in Geneva, will find the British in a sceptical and hard-bargaining mood. Nobody will get much mileage out of rhetoric this year.

Even on such a gala occasion as Prime Minister Diefenbaker’s induction as a freeman of the City of London, a faintly acid note crept in. The prime minister in his acceptance speech had spoken of expanding Commonwealth trade. Lord Mayor Sir Ralph Perring, proposing the prime minister’s health at a luncheon an hour later, said he hoped, “You and your countrymen” would do something to correct the adverse balance in Britain’s trade with Canada. Britain “cannot afford and should not be expected” to let the present situation go on, he said.

It was a mild dig but it was by no means inadvertent. Earlier in the day the Lord Mayor said to a friend, “1 don’t dare say any more, but I’m determined to get that much in.”

Next morning the Guardian, once the friendliest of British newspapers toward Canada, said on its editorial page, “The pertinent political question to be asked about Mr. Diefenbaker’s whirlwind visit to London is whether or not he has concluded any sort of firm understanding with the British government on matters of trade or defense.”

THE COMMONWEALTH: TOO SOFT, TOO EASY, TOO OOSY

This British attitude, which seems to be widely shared in both government and business circles, is not mere pique but harsh realism. The failure of Britain’s attempt to enter the European Common Market gave the whole nation a shock, sometimes described as a “diplomatic Dunkirk.”

A government economist explained, “We were counting on the Common Market for two things — the stimulus of competition, and a market for expansion. Frankly, the Commonwealth cannot provide either one. The competition it offers is too soft, too easy, too much

like the cosy market at home. And as a field for expansion it is not a reliable market.”

He meant that Commonwealth countries in general will not tolerate any substantial rise in British sales within their borders. When British sales go up domestic sales tend to go down; domestic producers howl for protection and usually get it. Canada is not the worst offender but in British eyes Canada is by no means innocent. For all our pious talk about expanding Commonwealth trade, all recent changes in Canadian trading laws have put up new barriers against British exports, from the rise in tariff on woollens four years ago to last summer’s emergency surcharges on all imports from abroad (some of which have recently been reduced but none of which has yet been eliminated). Businessmen here are very bitter about these things.

THE THREAT TO CANADIAN LUMBER

The meeting last month of the European Free Trade Association released a few straws into the winds of change. The EFTA is the association of European countries that are not in the Common Market, the so-called Outer Seven that surround the inner six. Except for Britain they are all small — all six of Britain’s partners add up to only 37.5 million people, so the British home market is half again as big as all of them put together. Obviously this is not a big enough market to alter the patterns

In all industrial products the EFTA countries are well on the way to free trade among themselves. They have cut tariffs by fifty percent already, two and a half years ahead of schedule, and they now plan elimination of all industrial tariffs before 1967. This would give Swedish lumber products, for instance, the same free entry into Britain as Canadian lumber, which now enjoys a Commonwealth preference of ten, fifteen and in a few cases of even twenty percent. Unlike the Common Market, EFTA will not impose a reverse preference against Commonwealth goods, but it will wipe out their existing special advantages.

But another subject came up at the EFTA meeting which for Canada was much more ominous. Denmark wants free access to the British market for its exports of farm products. Norway wants the same for fish. They back these demands with a very plausible argument; “You are asking us to give you free entry to our markets for all of your industrial goods, which is something not one of your Commonwealth countries is willing to do for you. Yet you keep our food exports from your market in favor of more expensive food from Canada and New Zealand and Australia. We want equal treatment.”

So far the British have made no reply to this request from their EFTA partners. The matter is to be discussed in more detail at the

next EFTA meeting in May. Britain has a farm industry and a farm vote of her own to protect, as well as the Commonwealth preference system. But a fundamental British policy ever since the repeal of the Corn Laws has been cheap food for the industrial worker, and now this becomes Britain's one great advantage over the Common Market countries with their inefficient, high-cost agriculture.

THE BRITISH ARE IN TROUBLE

Canada’s biggest food exports to Britain, like wheat, enjoy no preference — Britain gives free entry to anybody’s wheat. But several important smaller items are protected — fish products by preferences up to ten percent, cheese by fifteen percent, and so on.

I don’t mean to suggest that all or any of these Commonwealth preferences are necessarily doomed. But only that the British feel themselves to be in a dire economic plight and will take stern measures to get out of it. A fortnight ago the National Economic Development Commission published its opinion of what Britain’s rate of growth should be — four percent per year, or almost double what the orthodox Treasury view has deemed safe. Already this estimate has become a target, but the target cannot possibly be reached without inflation unless British exports get a rapid and massive expansion. That is what the British will be pressing for in May. Canadians should come prepared not just to make speeches but to make deals. 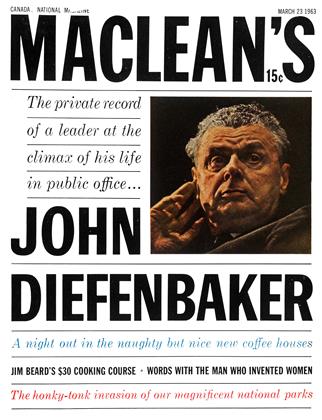