FREUD: I cannot imagine why director John Huston decided that the painful mumble and glassy stare of Hollywood's Montgomery Clift made him suitable to portray the Viennese father of psychiatry. In any event his performance seriously weakens this obviously “sincere” dramatization of Freud’s early career. In its latter half there are some memorable scenes focusing on Susannah York as a hysterical young woman whose beloved Daddy, she gradually recalls under questioning, was only slightly more wholesome than Jack the Ripper.

ITT’ SON OF R UBBER: Walt Disney's golden trademark probably will bring box-office success for this corny farce, but it’s a second-rate sequel to The Absent-Minded Professor. Most of the original cast can be found again, topped by Fred MacMurray as the inventor of “flubber," a gravity-defying goo which gives wings to athletes and turns a Tin Lizzie into an airborne limousine.

'¡cW TWO FOR THE SEESAW: William Gibson’s Broadway play had a cast of two (Henry Fonda, Anne Bancroft) and was confined to the messy apartments they inhabited. The screen edition has sensibly expanded the locale and augmented the roster of characters, but neither Robert Mitchum nor Shirley MacLainc can be wholly accepted in the central roles. They appear as an emotionally scarred Nebraskan, convalescing from a divorce, and as a tender, wacky beatnik from the Bronx who consoles him in her Greenwich Village “pad.’’

HéW* TO KILL A MOCKINGBIRD: Novelist Harper Lee has good reasons for her publicly stated

satisfaction with the job Hollywood has done on her best-seller. Screenwriter Horton Foote and director Robert Mulligan have been faithful to the book but creative in translating it to film, and the bespectacled and deglamorized Gregory Peck is shaggily convincing as Atticus Finch, a gentle hero who defends a Negro falsely accused of rape in an Alabama town in 1932. Mary Badham and Phillip Alford, as the

widowed lawyer’s plucky children, are untainted by the smirking precocity and overcuteness of the standard Hollywood juvenile. The result is a rare movie, a bit too slow in spots but deeply persuasive, decent-minded but never sanctimonious. It may be competing strongly with Lawrence of Arabia in April's Oscar sweepstakes. 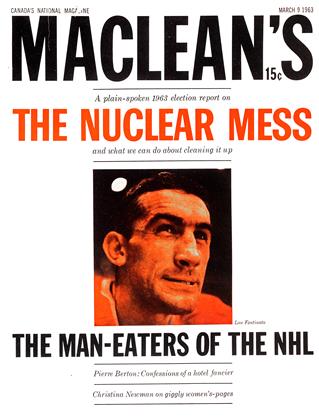