EVEN BY ARCTIC STANDARDS the IODE hall in Frobisher Bay is a depressing place. It encloses Sunday school chairs — and heat. Normally, its brightest moments occur on Saturday nights when the local Eskimos do their version of the Twist or dance to music that sounds both hillbilly and vaguely Scottish at the same time. But for seven days in the middle of March the community hall was reserved for more serious stuff: the first summit meeting of Canadian Eskimos — a conference of the sixteen producers’ co-operatives in the Arctic.

THE BIRTH OF AN ARCTIC COMMON MARKET

The delegates’ plans and the way they talked about them would have seemed incredible only three years ago — even to whites who know Eskimos well. Eskimos who, until recently, couldn’t grasp the idea of a restaurant were considering the fluctuations in the price of Arctic char in Montreal. They had come from communities hundreds or, in some cases, thousands of miles apart and they were discussing unprecedented trade among themselves in fish, sealmeat, lumber, boats and parkas. They were educating one another in the financing of Eskimo-owned co-op stores, stores which in three years have broken the Hudson’s Bay Company’s monopoly of northern trade and threaten, in a few more years, to drive out of business some of the company’s twentynine Arctic posts. They were discussing formation of a single marketing agency to handle the work of a dozen co-ops that produce prints, carvings and handicrafts for the south. Though they probably didn’t think of it, the Eskimos in the IODE hall were beginning to move toward a formal federation which, according to one government official, will include as many as a hundred Arctic co-operatives in 1973.

The work of the conference had to be slow. For some of the delegates, the government flight to Frobisher was their first trip away from home and, to some Eskimos, other Eskimos are almost as strange as white men. Some delegates wore plaid shirts, fried-egg ties and their hair long; others wore conservative business suits and their hair short. A man from the shores of Hudson Bay wondered how anyone could live in a God-forsaken place like Grise Fiord, a thousand miles north of Frobisher (“How can you hunt up there when it’s dark all the time?”). Delegates laughed out loud when the man from Aklavik said his people wanted to form a co-op to herd reindeer (Herding reindeer? If you spot one, don’t you shoot it?). Eastern and western Eskimos speak different dialects and most of the government people spoke only English; the tense, highpitched chatter of Eskimo interpreters punctuated almost every sentence of the week-long session. The only real bonds among the Eskimo delegates at Frobisher were the experience of hunger and the co-operative adventure.

There are several reasons why the Department of Northern Affairs thinks it stumbled on a miracle when it promoted the first Eskimo co-op at a tiny settlement on Ungava Bay in 1959. The most obvious is economic. The Eskimo population is increasing fast (their annual birth rate, 59 per 1,000, is the world’s highest) while the food, like caribou, which can be hunted by the old methods, is de creasing fast. Dollars buy food and the sixteen Arctic co-ops — a seventeenth is being formed now — are doing about a million dollars’ worth of business this year. Fishing and sealing co-ops arc bringing their members more raw food than they’ve ever known. (Sometimes it gets out of hand. The government learned this winter that the Port Burwell co-op had netted an astounding catch of 1,600 seals. By the time a Northern Affairs expert could get in to set up a canning plant, there were only twenty seals left — but the eighty-five Eskimos were happy and their 175 dogs looked like rhinoceros. Together, they’d eaten 250,000 pounds of sealmeat in less than four months.)

The brightest benefit of the co-ops, though, may not be economic at all, but political. They are the first real indication that Eskimos can be taught, and can then teach themselves, to run their own affairs in the twentieth century. As late as 1955, Northern Affairs tried to promote community councils to teach Eskimos local self-government; most of the councils failed dismally. Donald Snowden, chief of Northern Affairs’ industrial division, says that if something like the co-ops had not been found to interest Canadian Eskimos in selfreliance the advance of white industry might have reduced them to the level of some Alaskan Eskimos. In Alaska, Snowden says, many Eskimos are dependent, docile, even bootlicking in their attitude toward the “white gods” — except during rare outbursts of violence.

The confidence that control of their own businesses is giving the Eskimos is already becoming clear. At Povungnituk on the east coast of Hudson Bay, the Eskimo directors of the carving co-op called a meeting and fired their white manager for sins which included what they regarded as incompetent marketing. At Cape Dorset, the wealthiest of all northern co-ops, the Eskimo store has two white men on staff; one of them is the ex-manager of the rival Hudson’s Bay store. At Aklavik, the allwoman fur garment-makers co-op hired away another Hudson’s Bay man. Until recently, Eskimos at Cape Dorset have pretty well all been dutiful Anglicans, in name at least; now, the president of the co-op has been going around saying he’s not a Christian. (The same man asked a little angrily at the co-op conference why Eskimo hunters and fishermen couldn’t get government subsidies on motorized ski-scooters, since white farmers get subsidies on farm equipment.)

The co-ops, of course, did not spring from Eskimo initiative. It takes one, two, or even three years of research by scientists and guileful instruction by technicians to get an Eskimo co-op running on its own and, even then, a neighborhood white man usually handles the books and correspondence. It takes time to teach Eskimos that white men don’t like blood in their Arctic char (though, once taught, Eskimos don’t go halfway; at Fort Chimo, for a while, they were even brushing the fish’s teeth). It’s hard to teach people who’ve never seen a bank about the interest they must pay on money they’ve borrowed to finance a $25,000 fish freezer (though, again, no Eskimo co-op has reneged on a debt). These jobs take specialists and, so far, only the shortage of government manpower has slowed the spread of co-ops throughout the north. For the 12,000 Eskimos in the Canadian Arctic, they are the most exciting compromise yet between starvation and the drowning of the Eskimo race in the white man’s mines and factories. 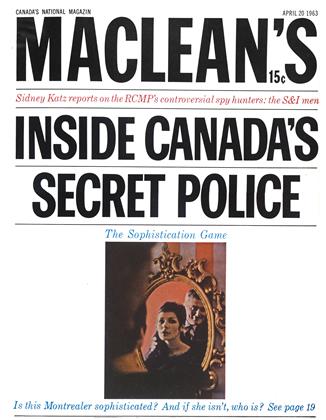