DAVID AND LISA: Except for a few “nightmare” sequences which inject a note of contrivance into the otherwise utterly convincing drama, this low-budget. American film is one of the best ever made in the field of psychiatric problems. The title-role sufferers (Keir Dullea, Janet Margolin) are emotionally crippled adolescents. They meet in an “institution” and slowly, agonizingly begin to communicate under the watchful gaze of a doctor (Howard Da Silva). The result is a memorable debut for Eleanor Perry, who wrote the intelligent script, and for her husband Frank, who directed it with discretion and vitality.

gsgr3 THE LONELINESS OF THE LONG DISTANCE RUNNER: This is another Angry Young Movie from Britain, and one that offers solid rewards except to customers who still yearn for the twinkling birdwatchers, bashful curates and jolly constables of yesteryear. The central character in novelist Alan Sillitoe’s fine, tough screenplay is a bony Midlands slum-boy (superbly played by newcomer Tom Courtenay)

whose resentment against The Establishment is almost wholly devoid of self-pity. Some of the film's numerous flashbacks make heavy weather of the essentially simple story, but they fail to spoil its honesty and sardonic humor. Sir Michael Redgrave portrays, without any taint of caricature, a hearty reformschool governor who offers the lad a chance for glory as a marathon runner.

SgiT’ THE HOOK: A well-meant but bumbling and sometimes pretentious vvar-is-hell drama about three American G Is led by a loudmouth sergeant (Kirk Douglas). They cannot bring themselves to kill, in cold blood, a prisoner whose execution has been ordered in Korea.

fFW* MY six LOVES: An overworked glamourqueen of stage and screen (Debbie Reynolds) unofficially adopts half a dozen stubborn waifs in this coy “romantic comedy” from Hollywood. Cliff Robertson is a stalwart young parson whose wary esteem for her soon develops into Something Stronger. 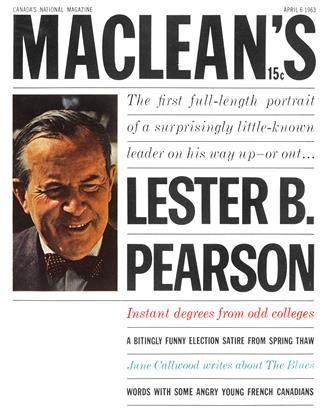