Diefenbaker will lead the toughest, loudest Opposition in history

NO CANADIAN POLITICIAN has ever switched from office to Opposition with quite the gusto of John Diefenbaker. While Lester Pearson and his new cabinet sweat over the legislative program for the upcoming session of parliament, the Conservative leader — finally freed from administrative responsibility — has been closeted with his advisors, cheerfully plotting

his long-and short-term strategy. The politicians who have recently had dealings with Diefenbaker insist he’s no longer the hypertense campaigner, but a relaxed and agreeable companion.

Decisions being taken at these meetings will set the course of Canadian Conservatism for the next decade. The timetable designed to bring the Tories back into power runs something like this:

Since he has just completed a campaign in which he built Liberal “obstructionism” into a major issue, John Diefenbaker realizes that he cannot, now that he is in opposition, become guilty ot the same thing. While the Conservatives will therefore vote for most of the measures brought in by the Pearson government, they will only do so after the most pugnacious kind of verbal crossfire. This will apply especially during the first two months of the session, because Diefenbaker is determined not to allow Pearson the advantage of fulfilling his promise of “sixty days of unprecedented action.” A full two weeks before parliament was due to meet, Diefenbaker was already drafting the speech he’ll deliver on the sixty-first day of the current session, in which he expects to attack Pearson for the promises still outstanding.

The Conservative leader is hoping to turn the Commons into a battle between himself and the new Liberal prime minister, because he is firmly convinced that Pearson cannot stand up to him in a face-to-face debate. The strategy of harassment by the Opposition will merely be an extension of Diefenbaker’s campaign oratory.

Since eighty-five of the ninety-four Conservative MPs in this parliament sit for rurally dominated constituencies, the Tory caucus will be completely ruled by the radicalism of Alvin Hamilton. Only three members of the caucus can still be classed as important orthodox Conservatives — George Nowlan, Douglas Harkness, and Senator Wallace McCutcheon — and they’re not likely to exercise much influence.

This situation may be helpful in allowing the parliamentary group to speak with a unanimous voice, but Diefenbaker and his advisers recognize that it’s hardly a healthy long-term prospect. If Pearson is even moderately successful with his agriculture policies, Prairie support could swing behind the Liberals in the next election.

To widen their voting base the Conservatives will look for gains among the working men in the urban areas. They’ll try to build a platform designed to unite the aspirations of farm-

ers and city workers. This sounds suspiciously like Tommy Douglas’ grandiose plan for the NDP, formed from the shotgun marriage of the Canadian Labor Congress and the once agriculture-based CCF. But the Tories believe that Douglas’ scheme backfired because he tried to impose an organization from the top, while they plan to let support bubble up naturally.

The Conservatives must also attract the intellectuals who can drastically revamp party thinking and at the same time enlist good new candidates. Neither seems possible under the present leadership. While Diefenbaker has not been asked for and has not given any definite commitments, it’s highly likely that he will retire in 1965 (when he’ll be seventy). He will then do his best to pass the leadership to Duff Roblin, the present premier of Manitoba. (Diefenbaker is so determined to kill any chance George Hees might have for the leadership that during the last campaign, at every whistlestop, he told local organizers the Conservative Party’s difficulties were entirely attributable to Hees’ “treachery.”)

Whether John Diefenbaker sees his party in power again before the end of the 1960s will finally depend on the success of the new Liberal administration. That’s why the Conservatives arc determined to become the toughest, loudest Opposition in parliamentary history. 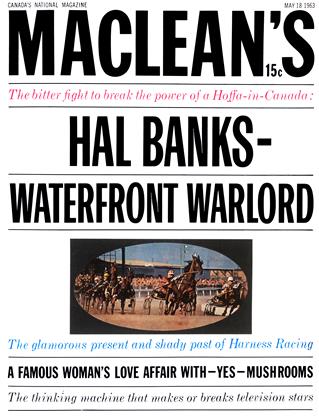