STAGE DIRECTIONS are simple for the next act of Quebec’s political drama: Exit — Réal Caouette, King of the Créditistes. Enter — Jean Lesage, Crown Prince of the federal Liberal party.

In French Canada, the April 8 election marked the end of a brief and frightening era. It was the beginning of the end for Réal Caouette, free-wheeling automobile dealer from Rouyn - Noranda, who gave Social Credit twenty-six Quebec seats in the previous election. Although Socreds still retained about twenty-five percent of the vote in Quebec this time and more than doubled their 1962 vote in the Montreal area, their strength was dissipated. They came out of the election with only twenty Quebec seats.

The glow was gone. At odds with the national party, unable to trust his own followers, Caouette was no longer the fire - breathing dragon of 1962. On election night he puffed fitfully at his enemies. Furious at Premier Lesage for his intervention in the federal campaign, he threatened to contest the next provincial election. He accused big business of conspiring against him. He claimed that the Liberal campaign had been financed by the United States. In brief, he acted like any other politician in trouble, and this was the way he appeared to many French Canadians during the campaign.

He had served Quebec well, indirectly, during his brief heyday. He was the Robespierre of the “quiet revolution” in French Canada, the unwitting evil genius of rising nationalist sentiment and economic discontent. He scared the daylights out of English-speaking Canada and the federal Liberal party.

No other politician could have personified so effectively the dangerous aspects of FrenchCanadian development. No other party but Social Credit could have presented such a simplified but striking picture of French Canada’s hunger for prosperity.

Caouette mistook himself for the spirit of revolution in Quebec. He was only its caricature. On April 8 the real revolution caught up with him and began to devour him.

It is always dangerous, of course, to write

political obituaries when the subject is alive and kicking. Social Credit has been active in Quebec for at least twenty-five years, in one form or another, and it won’t disappear tomorrow. But all signs indicate that the Caouette wave has crested.

Caouette also has served Lesage well. He was the main obstacle in the way of a federal Liberal sweep in the province in 1962. This year, federal Liberals needed Lesage support desperately. They got it — but at what price?

Lesage was in a position to drive a hard bargain with the federal party. On the government level, assuming that the Liberals form a federal government, this could mean a new tax deal for Quebec. In his budget speech only three days before the federal election, Premier-Treasurer Lesage said that Quebec requires a larger share of corporation and income taxes, all succession duties, and equalization payments based on the nation’s richest province, Ontario. He said that Ottawa must give Quebec additional revenues “or else” — a threat generally interpreted as meaning double taxation for Quebec residents with Ottawa held up as the scapegoat.

WHAT DID THEY PROMISE LESAGE?

Even more interesting as an item of speculation is Lesage’s personal price. Was there an agreement that Pearson eventually will designate his former parliamentary assistant as heir to the throne? Was there any promise of support from certain Ontario Liberals in an eventual drive for the leadership?

There is no doubt that Social Credit would have done much better in Quebec if Liberal candidates had lacked the prestige of Lesage. It was the only positive element in the federal campaign in the province. Pearson himself had no following worth mentioning, and his main lieutenant, Lionel Chevrier (who tried to outnationalist the Socreds, but thirty years too late) was almost a liability. Maurice Lamontagne, the economic thinker and new Outremont MP, was hopeless on the platform. In the end the Liberals relied on Chevrier as a symbol of respectability and Yvon Dupuis as their main political warrior.

Dupuis is a pudgy thirty-five-year-old who learned his politics the tough way, fighting the Duplessis machine in downtown Montreal. Duplessis succeeded in getting rid of him after one term in the legislative assembly but Dupuis popped up again in the 1957 federal election. For reasons which are still a little vague, the central Liberal organization refused to recognize him as candidate and he was defeated. But he made the grade, under official Liberal auspices, in 1958.

Dupuis was shoved before television cameras this year as the authorized Liberal antidote to Caouette. He spoke in all parts of the province, polishing up a routine based on imitation and hyperbole. He shook his jowls when he parodied Diefenbaker and pushed imaginary wheelbarrows filled with Socred funny money. Caouette emerged in Dupuis speeches as sort of Hitlerian Santa Claus.

If the Liberals generally lacked exciting candidates, they had the next best thing: cash. In St. Antoine-Westmount, C. M. Drury set up an elaborate automatic telephone campaign that gave callers any of four speeches, in English or French, when they dialed advertised numbers. (This required twenty-four telephone tape recorders, some of them brought in from Kansas.) Liberals spent heavily on radio, television and newspaper advertising, and pumped money into downtown Montreal constituencies where “volunteer” election workers come high. Conservative candidates were struggling along on $2,000 budgets from central headquarters

in many ridings where Liberals were reported to have $25,000 to spend. All parties, including the NDP, served drinks at press conferences, but Liberals often served a red burgundy which sells in government stores for $4.25 a bottle.

Socrcds had as much money as last year, but it looked thinner. In 1962, no one expected Les Créditistes to wage an elaborate campaign, and it seemed miraculous when they collected enough money to hire large halls and put out a crude campaign newspaper. This time, the party was respectable and more money was required for posters, television and a professional-looking newspaper.

During the early part of the campaign, some observers sensed a loss in Socred strength. It was difficult to pin down because the movement was spreading into new areas while losing support in its original strongholds. Caouette himself gave an impression of impending failure. On the surface, his campaign was the same mad race as in 1962: Crowds were larger than last year, if anything, and equally vociferous.

Somewhere along the line, however, Caouette started to lose his voice and his touch. His open split over nuclear arms with national leader Robert Thompson, never healed during the campaign, plagued him, and he had to combat Premier Lesage. By the last weeks of the campaign, he was on the defensive and the old missionary enthusiasm was waning.

The much-touted rally at the Montreal forum on the Friday before the election was a fiasco. Socred whips violently bounced students from the arena when they insisted on giving Nazistyle salutes and shouting “Sieg Heil” and “vote for Hitler.” The fist-fights and kicking threw Caouette off balance and he delivered one of the worst speeches of his career before an audience of 15,000 people.

There was a strong nationalist flavor to the meeting, far more frightening in actual experience than the ineffective bomb threats during the campaign by separatist agitators. There was a definite feeling, when the fights were in progress, that it would be unwise to talk English in certain parts of the crowd. It was frightening, and it apparently frightened away many potential Socred votes among French Canadians themselves. PETER DESBARATS 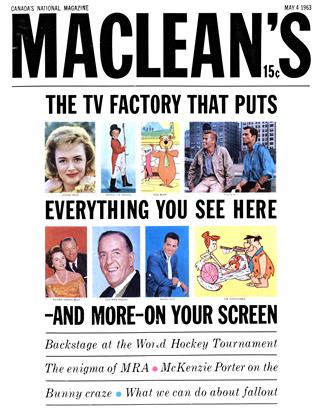