QUEBEC’S LEADERS, in clarifying these demands, are always quick to say that Quebec wants nothing for herself that she doesn't want for the other nine provinces. They are, obviously, sincere. But their demands, just as obviously, go against the economic interests of some provinces and clash violently with the present opinions of others. They imply the consent of the federal government in its own emasculation, which is unlikely. Nevertheless, these are concrete issues raised by determined men, and while the rest of Canada is not apt to acquiesce in all of them, the rest of Canada is going to have to negotiate all of them in good faith or get along without Quebec.

So far neither the federal government nor any of the nine other provincial governments is in any shape to negotiate reasonably with Quebec. Quebec’s leaders know what changes they want; they have studied the advantages and obstacles with intelligence; they are driven by pride and ambition that have been banked for two centuries. The leaders of the remaining Canadian governments know they don’t want the boat rocked and, on the issues raised by Quebec, that’s about all. The federal commission on biculturalism proposed by Prime Minister Pearson will almost certainly study too little and report too late to become an important influence on the hard bargaining that must begin soon.

The danger is that Quebec’s initiative, if it isn’t met with informed. realistic negotiation, will harden into more ultimatums like the tax demand she has already laid down. We believe that the ten remaining governments should immediately appoint parliamentary committees to examine tax and constitutional reform, first from the vantage of their own self-interest and secondly from Quebec’s. We believe that this is one of the most vital political jobs to be done in Canada this year or next. If the job is done badly, we will have a ruptured Confederation well before there is a centennial of Confederation to celebrate. KEN LEFOLII 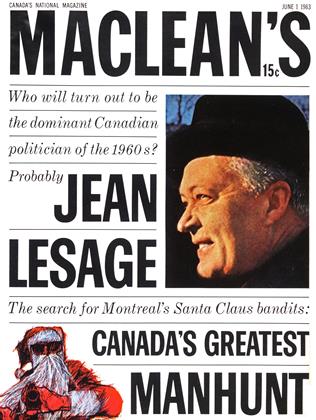