WHY IS THE PROFUMO AFFAIR like a mixedmanned nuclear fleet?

This is not one of the innumerable blue jokes now floating around London. It’s a perfectly serious question, albeit a bit rhetorical,

and the several answers to it arc a doleful tale of the Macmillan government’s woe. In sum, they prove that luck is against the British Tories this year.

The first point of resemblance is parliamentary. Like the Profumo affair, the mixedmanned fleet is something that the Labor opposition doesn’t have to work at. All they need to do is raise the question in either house of parliament, then sit back and let the Conservative back benches continue the assault against the government.

Another similarity is the dilemma in which Prime Minister Macmillan finds himself in each case. Explaining Profumo, he had to defend himself against the charge of being a cynical scoundrel by pleading that instead he was merely a credulous dupe. In the case of the mixed-manner force he must choose between looking like a dolt and looking like a helpless American satellite.

So far the government has been fending off critics by saying no decision has yet been reached either for or against British participation in this German-American project. Reports at the time of President Kennedy’s visit indicated that this excuse will continue to serve for a few months yet — Kennedy and Chancellor Adenauer apparently agreed not to press the question on Britain or Italy just now, in view of the internal political troubles in both countries.

However, American sources make it quite clear that the reprieve is only temporary. Washington is committed to the idea of a mixed-manned force and determined to get Britain into it. One U. S. official privately put it in language too blunt to be used between even the friendliest heads of government: “Macmillan will have to choose between his own backbenchers and President Kennedy.”

As Americans explain their policy it is an attempt to solve the problem of giving Germany the appearance of equal treatment within the alliance. Britain has her own nuclear weapons and France is building hers. Germany is bound by treaty not to build any of her own, but Americans believe Germany will not remain content with what they call second-class status. So they have come up with the idea of a joint force, a fleet of surface ships that would carry nuclear missiles and that would be manned by composite crews from various NATO countries.

True, the ultimate control of the nuclear weapons would remain in American hands. That is stipulated by American law at present, and though some relaxation of the law is planned there is no possibility that Congress would

take all the wraps off American nuclear weapons. But Americans believe that the Germans will be satisfied with the joint mixed-manned force, provided the British and maybe the Italians come into it too. (Neither Germany nor the U. S. wants a mere German-Amcrican force, with Germany asked to carry a huge share of the cost in a fleet over which she would have little or no control and which her other allies had spurned.)

U. S. Admiral Claude Ricketts in two trips to Britain and Germany seems to have convinced both navies that the project is technically feasible. The fleet would be made up of 18,000-ton merchant ships, somewhat faster than conventional ships and very well dispersed. Elaborate calculations have been made to prove that they would not, as some critics have said, be too vulnerable to be of any use, but although he has persuaded sceptics that the scheme is militarily feasible, he certainly has not convinced anybody in London that it is militarily necessary or even desirable.

Americans do not pretend it is militarily

necessary. Their argument in favor of it is wholly political. The British are not convinced by that argument either — they think the Germans are supporting the plan merely to please the Americans, or as a first step toward eventual acquisition of their own nuclear weapons, or perhaps both.

Moreover they are a bit disturbed that the Americans should have contrived such a project at all. It shakes whatever faith they had in Defense Secretary Robert McNamara and his whiz kids. In their view, the Alice-in-Wonderland logic that supports the mixed - manned fleet could only be employed by an electronic computer. They admit quite frankly in private that they think the whole idea is crazy but also that they don’t dare say so.

Why not? Because Britain's own nuclear policy is heavily dependent on American cooperation. The so-called independent deterrent will have a British nuclear warhead but will be carried in a Polaris missile which only the Americans know how to make and which Britain couldn’t afford to develop for herself anyway.

But if Macmillan and his ministers feel thus

inhibited, Conservatives outside the government do not. Lord Montgomery of Alamein has repeatedly described the mixed - manned force as “Poppycock.” Lord Avon (Anthony Eden) says the same thing in more decorous language. So do many other noble lords, and a platoon of retired colonels, commanders and group captains on the Tory backbenches in the Commons.

It is, of course, possible that the British government may be able to postpone decision on the matter until after a general election. Everyone agrees that it’s not likely to be a hot campaign issue in this country, not the sort of thing on which elections are won or lost. But it is the sort of thing that’s important to party morale in Parliament, and if Macmillan has to yield to American pressure he will have a lot more dissidents in his own party than the twenty-seven who abstained in the Profumo vote. By the same token, Kennedy is anxious to get a favorable answer out of London before he runs into his own election campaign a year from this autumn. 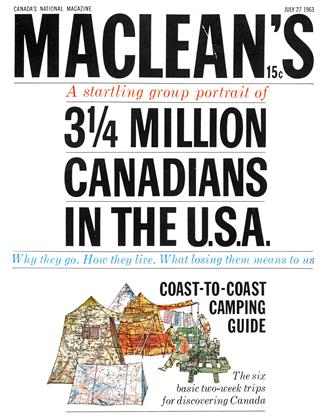