Pierre Berton’s promise to his children (It’s time we slopped hoaxing the kids about sex, May 18) that "whatever occurs they will always have the full sympathy of their parents,” is to me a shocking promise for any parent to make regarding their children's exploits. Sympathy in advance to adolescents whose ideas, thoughts and acts towards sex are of a mercurial kind, can be dangerous.

^ Pierre Berton performs a valuable service in stating the emotional problems of teenagers in this sex-obsessed and sex-exploited age. This is a subject which demands the close attention of the churches and all persons and agencies concerned about the well-being of the individual and the stability and health of the nation.

The solution does not lie. as Mr. Berton suggests, in the abandonment of the standards of our Judaeo-Christian heritage, based on the teaching of the Old and New Testaments. It is not for the church to acquiesce in the moral laxity of a secular age. in which as Mr. Berton points out, sex is cynically exploited for commercial gain. Its business is to uphold the moral values and spiritual ideals necessary to true maturity in persons and society.

Mr. Berton links the name of the Archbishop of Canterbury, who wrote recently on the subject "Sex, Civilisation and Morals," with the Quakers in Britain, whose pamphlet he quotes at some length. In justice to the Archbishop of Canterbury, readers of Maclean’s should also have knowledge of his views expressed in the following quotation from his article:

"Eros and Venus together do not exhaust the meaning of man and woman in their togetherness. Man and woman are selves, they are persons: they bring to one another a wealth of thoughts, actions, interests, concerns and these are to become the stuff of the unity between them, without individuality disappearing.

“What monogamy does is not only to unite Eros and Venus to one another but to unite them both with the whole realm of unities in which man and woman can be joined. Thus it is that these are linked with Philia, the whole range of comradeship in life together which this involves.

"And as God is the giver and God is the goal, there comes also within the relation of man and woman the ‘agape’ which is the divine self-giving kind of love without which the rest may go astray.

"Marriage today, whether in church or in registry, is a contract to accept a lifelong bond: and through it a man

and a woman enter upon not a series of activities together, but a status. It is in terms of status — husband, wife, father, mother, children — that monogamy serves the security of society as well as the divine goal for humanity." - H. R. HUNT, SUFFRAGAN BISHOP

* Who is Pierre Berton that you honor him by squandering a whole page on the trash he writes? ... If the only cure for immorality is for everyone to be immoral, then it would seem that the only cure for larceny, murder. treason, etc. is to accept them as the ordinary way of living and make no fuss about eradicating these crimes.

^ Humanity has been blessed with reason and sex. It is most refreshing to note that Mr. Berton is capable of applying the former to the latter. —

^ There's a good deal of sense in Pierre Berton's comments on teenagers and sex but also a good deal of pernicious nonsense. 1 never expected Mr. Berton to fall for the thoroughly illogical argument that the "done thing" must also be the right thing. Nearly half of American women, he tells us, have enjoyed premarital sex without regrets; ergo, there's nothing wrong with premarital sex . . . More people are smoking now than ever before, and nonsmokers are a minority; does this prove, even despite the doctors' warnings, that there’s nothing wrong with smoking?

I would like to offer my sincere sympathy to Mr. Berton's wife. — MRS. HELEN BROMLEY, TOWN OF MOUNT ROYAL, QUE.

A Catholic view: the vitality of sex is within marriage

Obviously Pierre Berton (It’s time we stopped hoaxing the kids about sex, May 18) has never bothered to acquaint himself with the Catholic teaching on the nature of sex and marriage. The church sees sex as a marvelous gift of God. By its exercise, men become procreators; they co-operate in the production of new life . . . There is more vitality in the sex act in a Catholic marriage than in any of the amorous wanderings of today’s socalled great lovers, because it is performed as an act of the whole person, body and psyche (if you will), not simply as a release of glandular tension. When the church declares that adultery and premarital intercourse are wrong she is not attacking sex. She is not saying sex is evil and wicked. She is saying that the abuse of something sacred is wicked. She will never, as Berton suggests, do an about-face and condone sexual abuse — she has too high a regard for sex to take that easy way out. . .

Mr. Berton sees pre-puberty dating as ridiculous, yet his only protest is a shrug of the shoulders, a why-fightit attitude. If he and a few other parents had the backbone to make themselves and their children socially unacceptable, they might yet heal a sick society. — JAMES M. JORDAN, ST.

^ Berton’s article re adolescents and sex has needed saying out loud for two generations! As the (widowed) father of five daughters, I agree with him one hundred percent. — J. w. TILLEY,

* It is to be hoped that such a progressive thinking father as Pierre Berton does not neglect to give his said daughters and sons a very thorough schooling in birth control, or the greatest contribution to the population explosion may well be Pierre Berton’s grandchildren. — PHYLLIS KUNST,

Long may Mr. Berton continue to print such telling editorials as this one; may he soon do as much to mitigate such shame and guilt as are associated with other broadening experiences like car-stealing. True, Mr. Berton very effectively reveals the dilemma of modern society, posed by the blatant commercialization of sex for the sake of the “Teen Market.” Mr. Berton’s solution has been tried before, during certain historic periods of other great civilizations — Rome’s, for example. — s. DOUGLAS, ST. ANDREWS, N.B.

^ Mr. Berton has run the risk of discussing that second level of morality of our society — the one we live by — not the one we say we live by. Our younger group — those not as thoroughly schooled in hypocrisy — will appreciate Mr. Berton’s realistic

appraisal of our sex mores. So here is a cheer to counteract the inevitable screams of righteous indignation. —

It might be pointed out that delayed marriages need not result in a decade of whimpering frustration brought on by the appalling North American practice called “petting.” It might please Mr. Berton to know that a few churches have had sufficient fortitude to refuse to condone “petting.” Wholesome recreation and association of youth combined with a good example in the home are a few suggestions for the maintenance of sexual morality of both sexes, so that the ceremony at the altar may have as its basis mutual confidence. That is how I want it to be when I get married. - ROY A. PRETE, SASKATOON

^ Pierre Berton rightly condemns modern society for its overemphasis on sex. Instead of instituting a stronger attack on this —which would include advocating censorship of movies, television and literature — he proposes to let two wrongs make a right.

*" I am among the youth of our nation and therefore fall prey to Pierre Berton’s insinuations that young people are, generally speaking, given to extreme sexual frustrations. May I assure you that such is not the case. J am nineteen and have been dating since my sixteenth birthday. During this time 1 have dated a variety of young men all of whom have not found it impossible to correlate social ability with respect for human dignity. Throughout this period of social development J was at no time tempted to compromise my moral standards. 1 am presently engaged and look forward with anticipation to a long and happy marriage. I do not present these facts because I think myself unique. Quite the contrary, the majority of my friends, of both sexes, share the same attitudes. A person need be influenced unduly by the sex preoccupation of our era only if he lacks the .ve//-control to cope with it. — PEGGY

*" Pierre Berton's brief look at contemporary sexual patterns and problems comes like a breath of fresh air to the pages of Maclean’s. Let us by all means have more public discussion of sexual behavior so that the overpowering odor of social hypocrisy may be mitigated. — j. GOLD, PH.D.,

*" I think Berton is extremely funny but that he doesn't know what he is talking about. However, most middleaged men reach the stage where they spend more time talking than acting. - MRS. WALSH, TORONTO ★ 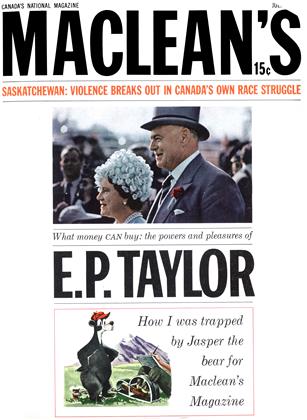