SHORT OF A NUCLEAR ATTACK, many Americans can think of few worse things that could happen to the United States — and Canada — than the election of Barry Goldwater to the White House. But there are obviously other tens of millions of Americans who look on the junior senator from Arizona not as missileshaker and a threat to peace, not as an economic reactionary eager to restore the conditions that led to the Depression, but as the potential savior of the western world. I sat among eight thousand Goldwater fans at a meeting the other night and was nauseated by the speakers’ platitudes and John Birch Society garbage. But I wasn’t too nauseated to note the unbridled enthusiasm of those around me or to realize that Goldwater has a betterthan-even chance, as matters stand in 1963, of getting the 1964 Republican presidential nomination, plus a fighting chance of defeating John Kennedy.

The scene was the National Guard Armory in Washington, which is approximately the size of a mammoth Kentucky cave. The wooden chairs were elbow-to-elbow. They were all filled and where there weren’t chairs there were standees. About half the audience wore fake straw hats — really paper — with gold ribbons that had “Goldwater, ’64” printed on them. They also wore badges of pie-plate dimensions that said, “Go, go Goldwater in ’64.”

Hundreds had signs they jiggled up and down on long handles. There were signs with Goldwater’s likeness on them — Goldwater in his distinguished statesman pose, his jaw set sternly and his white hair accentuated by his dark business suit and dark tie, and Goldwater the reserve air-force officer in his flying suit, his collar open, his hair slightly tousled and a boyish smile on his handsome face. There were signs that proclaimed, “Only Barry can carry Ohio . . . Only Barry can carry Texas,” and so on through forty-four of the fifty states. There were signs that said, “Don’t tarry, back Barry,” signs that said “ ’68 is too late” (1968 being the presidential election year after 1964), and signs that simply bore the chemistry symbols Au (for gold) and HüO (for water). But more revealing of the way these people think were the signs that said “Better brave than slave,” and “Better brinkmanship than chickenship,” and “Kennedy key appointments: yellow towards the yoke of communism, soft-boiled on spies, and liberally cracked.”

There were flags, fluttering like leaves in a forest. One woman was waving four of them. Red, white and blue bunting covered the walls of the enormous armory from rafters to floor, and flanking the stage were elephant-sized photographic blow-ups of Goldwater. There was an orchestra. There were spotlights, television and newsreel cameras, and pretty Goldwater Girls in cowgirl togs.

The whole show was quite an affair. But a

couple of things were missing. One was Negroes: in Washington, which is more than half black, the audience was all white. The other missing ingredient was the great man himself, Barry Goldwater. He’d stayed away purposely because this was a “draft Goldwater rally,” to be followed by similar rallies elsewhere, and for the benefit of his public image he wants it to appear that the Republican nomination is seeking him, not that he is seeking the Republican nomination. At the moment, the nomination actually does seem to be seeking him. Pollsters report that in popularity with the voters he is far out in front of his two serious Republican rivals, Rockefeller of New York and Romney of Michigan.

The important part of Goldwater’s success story is the temper of the times. Goldwater is a right-winger to the bone, the very symbol of conservatism, and the surge to the Right in the U. S. has not been as strong as it is now since the days of the McCarthy witch hunts.

The failure of the Kennedy administration to dispose of Castro, the continuing presence of Russians in Cuba, the exposure of spies on both sides of the Atlantic — all this has provided ammunition for crackpot outfits that are dedicated to spreading distrust and hysteria. The income of the John Birch Society, to judge from the high-priced organizers it has hired recently and the bookmobiles it sends around to indoctrinate Americans with right-wing

propaganda, must be growing. The cause has been helped, I’m sure, by the reaction of segregationists to the Negro revolution — and what’s happening can’t be written off as anything but a revolution. And who is the chief political beneficiary of the right-wing activity? Goldwater, of course, since he’s the only right-winger with the remotest hope of being accepted by rank-and-file Republicans as a presidential candidate. He may not be as far to the right as the Birchers would like, but he has implied that Cuba should be invaded by U. S. troops, and that Americans should tear down the Berlin wall, and he’s a stalwart champion of states’ rights — the kind of states’ rights that preserve racial discrimination,

HE MAKES ENEMIES BUT HE PLEASES HIS FRIENDS

Meanwhile, John Kennedy’s star may be descending. His position, right now, is unenviable. He is given a minimum of credit for keeping the peace with the communist world, but blame is heaped on him for not taking steps that would lead to war. The Negroes say he hasn’t done nearly all he should do to help them get first - class citizenship — and the segregationists say he has done far too much. Kennedy is learning that by trying to please everybody you please nobody.

Goldwater, on the other hand, doesn’t try to please anybody but conservatives. He lambastes left-wingers and liberals whenever he can and while he naturally makes left-wing and liberal enemies he makes conservative

friends. There are a lot more conservatives than there used to be. I was surprised, at that draft-Goldwater rally the other night, to see how young many of them are — more than half, I would judge, still in their twenties. I’ve been at scores of political meetings but this was the first I’d ever seen where young couples held hands and did a sly bit of smooching.

They stopped holding hands to clap whenever a speaker charged that Kennedy betrayed the cause of Cuban freedom or promised that when Goldwater was president his first task would be to “clean out our state department from top to bottom.” They were not too busy billing and cooing to roar “No” when asked if they favored “the Kennedy administration’s program of accommodation with the communists,” and to roar “Yes” when asked, “Well, then, are you prepared to dedicate your time, your talent, your energy and your money in a nation-wide crusade to elect a man who will stop America’s downward plunge?”

It all reminded me slightly of one of those meetings the Nazis used to hold. But the Nazis —• Lincoln Rockwell’s American Nazis — were outside the armory picketing. Their posters said, “Goldwater is a race mixer.” And a few yards away from the Nazi picket line, Black Muslims — the most militant group of Negroes in the U. S. — were selling their tabloid newspaper, which is called Muhammad Speaks, and had a headline reading “We Must Have Justice! Regardless of the Price!” Passing the Nazis and Muslims, I wondered who’d vote for whom. 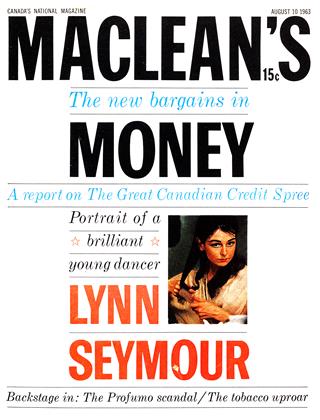