MURDER AT THE GALLOP: The hippo

IESP" YOJIMBO: Master-director Akira Kurosawa has come up with another memorable work in this Japanese western, a gory caricature of the familiar cactus saga about the killer-for-hire (Toshiro Mifune) who restores “peace” to a troubled town.

KW3 DUEL OF THE TITANS: Two of Hollywood’s beefcake headliners — Steve Reeves, a former Hercules, and Gordon Scott, a former Tarzan — appear together as Romulus and

Remus, the legendary twins who founded Rome eight centuries before Christ. The film is typical of the stupefyingly dull costume “spectaculars” now being made in Italy with international casts. The musclemen’s acting is primitive, the script is a catalogue of melodramatic clichés, and even the showdown promised in the title is only slightly more hectic than the second Liston-Patterson bout.

SUMMER MAGIC, starring the fast-maturing but still unspoiled Hayley Mills as a Boston teenager in 1910, is a Walt Disney production that can be enjoyed by adults though it’s tailored for younger audiences. Also current is The Nutty Professor, starring Jerry Lewis. It, too, presumably is intended for kiddies, but I didn’t hear much laughter from any age group the day I forced myself to sit through it. 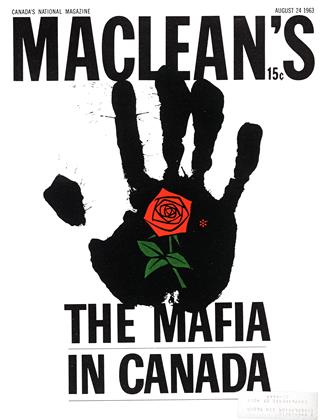