Nothing’s too good for official culture in Quebec. Not even $5 million

GUY BEAULNE moved out of his Westmount home this month, turned his back on memories of the Plouffe family, and went to Quebec City. His destination was a desk in the provincial government’s expanding cultural affairs department.

• It rates a close look, and so do the other titles on the doors along the halls of the department’s quarters in a converted student cafeteria that used to belong to Laval University. There are directors of musical projects, literature and publishing, arts, astronomy and archeology. There is a director heading the French language bureau and another running a section titled, in official translation, the Extra-Territorial French-Canada Branch.

Two years ago, Quebec’s cultural affairs department, the first in North America, consisted of a cabinet minister and a couple of civil servants. Now, it has a full-time staff of 206. In three years, its budget has almost doubled. It is the Canada Council of French Canada. It controls Quebec’s $34,000-version of the governor-general’s literary awards (which total only $6,000) and it pays Quebec publishers to print books that will have little sale.

THE CULTURAL IMPERIALISM OF FRENCH CANADA

No other aspect of government activity better illustrates the crusading spirit of the New Quebec. The aim of the extraterritorial branch is nothing less than the establishment of Quebec as the cultural fatherland of all French-speaking Canadians and Americans. When he created the department Premier Lesage said: “No one seriously imagines that French Canada ends at the territorial limits of Quebec province.”

Cultural Affairs Minister Georges Lapalme doesn’t stop at North America. He says that Quebec must be ready to meet demands for assistance to French-speaking nations in Africa and other parts of the world.

Guy Beaulne, the new theatre director, is typical of the men who are joining Lapalme’s department. There isn’t much that he hasn’t done in Quebec theatre. He has acted, produced, directed, adjudicated, and written criticism. He has produced the Plouffe family on television and Shakespeare for English-language drama groups in Montreal.

Beaulne’s new assignment is to tell the government what kind of official support Quebec theatre needs. “For a time, I’ll be mainly father-confessor to the theatre groups,” he says.

“I want to get a better idea of the structure of theatre in Quebec. We now have almost a dozen professional companies operating in Montreal. Where do they all fit? What’s responsible for the terrible state of English-language theatre in Montreal? Should the province be thinking about a film industry? We’re not trying to ram culture into the minds of the people. But we can do a lot for theatre if we move sensibly.”

BACK TO THE REAL LANGUAGE

The closest thing elsewhere to Quebec’s cultural affairs department is the one in France, under Cultural Affairs Minister André Mal-raux. The French version came into being in 1959. Quebec created its department in 1961 and since then the budget has increased from $2,724,000 to more ihan $5 million. This includes the department’s Canada-Council-style grants to artists, writers, musicians and others, which have gone from $765,000 in ’61 to $1,-

The French - language bureau puts out a monthly bulletin called Mieux Dire, aimed primarily at removing Anglicisms from the language. In eighteen months, its circulation has jumped from 20,000 to 75,000. Issues of Mieux Dire have urged sportswriters to use “marquer des points” rather than "compiler un score” and restaurant owners to replace their "salle à diner” signs with “salle à manger.” (It was the linguistics bulletin, incidentally, that raised such a furore last year when it suggested that journalists covering the Quebec Legislature should substitute the word “state” for “province.”)

Just getting under way this month is the Extra-Territorial French Canada Branch which is charged with fostering the spread of French culture beyond the borders of the province. “Ambassadors” from the branch have already accepted invitations to visit French-speaking groups in the Maritimes, the Prairies and the United States. After one mission, Lapalme visited the press gallery in Quebec City to report discoveries of isolated pockets of former French-Canadians far south of the American border. In highly dramatic language, he described their desperate attempts to preserve their language and culture. “By the end of his talk,” one reporter says, “you felt like marching down to those people and rescuing them right away.”

“The important thing for these people is the realization that they are not forgotten,” says Guy Fregault, the deputy-minister of the department. Fregault is the man who defined an extremely ticklish point for the department: the difference between encouraging and controlling cultural development. He admits that people have grounds for mistrusting government cultural activities “when the state is not really the exponent of their aspirations.” But there is no cause for alarm, he says, when the state “is in intimate harmony with the population’s sense of identity.” Whether Englishspeaking Quebeckers were soothed by this assurance is debatable though certainly, so far, English-language cultural institutions have made no complaints about the grants handed out by the new department, PETER DESBARATS 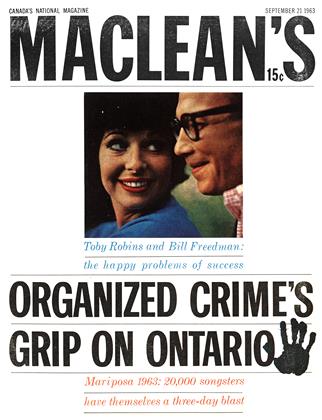