TO SIT IN THE FRONT ROW at the opening of Montreal’s Place des Arts on September 21, you have to pay $100 a seat. That’s if you huy the ticket over the counter; if you happen to pick up your seats on Westmount’s genteel black market, you can pay goodness knows how much more. The least you can pay for that evening, in fact, is $15, for a seat right at the back of the third balcony. For this you will hear a concert by the Montreal Symphony Orchestra and, more important, take part in perhaps the flossiest society event in the history of Montreal.

But the main star will be La Grande Salle itself, the magnificent glass-and-concrete opera house on St. Catherine Street. Montrealers already are claiming that the opera-concert house is the best of the big music boxes built in Canada — and probably in North America — since World War II. Looking pointedly at Toronto’s O’Keefe Centre, Montreal financier Louis A. Lapointe has said, “Anything you can do, we can do better.” Lapointe, the burly president of the Sir Georges-Etienne Cartier Corporation, which runs La Grande Salle, is such a booster that when he takes groups of businessmen through the empty house he interrupts the tour to boom a few operatic bars into the top balcony from centre stage.

The European style of the posh lobbies is continued in the 2,982-seat house. Three curved, shallow balconies sweep across the back of the auditorium. Each box — and there are three row's of them — has its own “champagne room.” An open admirer of old European opera houses, architect Fred Lebensold filled La Grande Salle with what he calls “contemporary cherubs.” There aren’t any winged babies hanging from cornices, but there is certainly a feeling of baroque splendor. La Grande Salle cost about nine million dollars.

It will be only part of a four-unit cultural centre. Lapointe hopes that within three or four years the complete Place des Arts site w'ill include a 1.250-seat drama theatre, a 500-seat hall for music recitals and a commercial skyscraper, which is supposed to make the entire complex self-supporting.

Not everyone is quite so cheerful about the project as Lapointe. Quebec nationalists attacked it this year when an American was named administrative director. (Bilingual Silas Edman — he speaks Spanish — weathered the storm after coming here from his old job as assistant secretary of the New York Philharmonic Orchestra.) But perhaps the unhappiest Montrealer on opening night will be Spiros Adamakos, owner of the former “Restaurant Place des Arts.” He had to change the title to “Restaurant Place des Amis” after a judge, upholding the corporation’s exclusive right to the name, ruled Adamakos was catering more to the stomach than the soul. 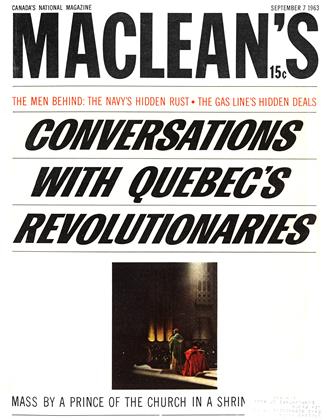