The growing acceptability of a “harmless” narcotic

Does marijuana hurt its users? Medical authorities are beginning to say no — publicly — and the drug is showing up in an increasing number of places. But to the police and others who deal with the effects, marijuana is still an instrument of evil

The growing acceptability of a “harmless” narcotic

Does marijuana hurt its users? Medical authorities are beginning to say no — publicly — and the drug is showing up in an increasing number of places. But to the police and others who deal with the effects, marijuana is still an instrument of evil

“THE MARIJUANA PROBLEM might he abolished,” the editorial in Lancet suggested last month, “by removing the substance from the list of dangerous drugs and giving it the same status as alcohol by legalizing its import and consumption.” Lancet is a highly respected weekly medical journal published in Britain and the suggestion was one more item in the growing controversy over the uses and effects of marijuana.

What exactly the marijuana problem is, I discovered after working with the marijuana gourmet whose story begins on the facing page, depends on whether a realist or an idealist is discussing it. The doctors tend to be idealistic. Drug addicts are sick people, they say, and they should be treated accordingly. But to the police, those supreme realists, the marijuana trade is simply another exercise in cops and robbers. Marijuana comes under the Narcotics Control Act of Canada and a user can go to jail for seven years; a trafficker can go to jail for life. The police don't know how many marijuana smokers there are in Canada — their arms aren't riddled with needle scars and they don't show violent symptoms if their supply of the drug is suddenly cut off — but they suspect the number is increasing. They look on marijuana as the silent partner in many crimes of violence. But the worst of it, according to the policemen I talked to, is that the teenager who begins smoking marijuana just for the occasional kick winds up injecting heroin into his veins several times a day. “In my experience,” one officer told me, “marijuana is almost inevitably the first step toward the white stuff.”

The doctors who try to rehabilitate drug addicts claim that marijuana does not necessarily lead the user to heroin. Marijuana is not in itself addicting as medical doctors use the word. The marijuana user doesn’t develop a tolerance for the drug. He doesn't need ever-increasing doses of it to achieve satisfaction. He is as likely to get as big a kick from his one-thousandth marijuana cigarette as he got from his third or fourth. Smoking marijuana, the doctors claim, does not lead the smoker to seek out bigger kicks from stronger drugs. But to get marijuana, users have to go outside the law where they mingle with the heroin users and eventually encounter the pushers. Take the distribution of marijuana away from criminals, the doctors say, and you take the innocuous marijuana user away from the dangers of heroin.

The doctors don’t really know what marijuana does to the brain. They have learned from observation and the accounts of users that it seems to distort their perspective so that colors and sounds take on a greater intensity and time seems to stand still. A jazz musician may improvise for hours and beiieve he has been playing for only a few minutes. Marijuana users tend to be intelligent, sensitive and often creative people. But contrary to what many of them believe, marijuana doesn’t improve their creative abilities. A doctor told me of one patient who turned on his tape recorder and then turned himself on with a “stick” of marijuana. He recorded himself playing under the influence of the drug. He thought he was swinging as he never had before. But when he played the tape back, he found that his music was far inferior to what it was when he performed stone-cold sober.

Marijuana comes from the hemp plant which can grow just about anywhere but which is cultivated in the middle and far east and in South America. In the orient, the hemp resin is dried, cut into cakes and smoked as hashish. In this hemisphere, the leaves of the plant are ground into a crude tobacco and rolled into cigarettes. According to Canadian police, marijuana is too bulky and too hard to smuggle to interest the Canadian crime syndicates. But the independent retailers, like the one whose story begins on the facing page, obtain their merchandise from the gangsters associated with, if not atually a part of the American Mafia.

Officers of the RCMP narcotics squad whom I spoke to agreed with the medical evidence that marijuana is not an addictive drug. But the Mounties disagree with doctors’ high opinion of marijuana users. True, some users are intelligent and creative artists. But the others are big- and small-time hoodlums and high- and low-price prostitutes. Marijuana is part of the criminal world and the clean-living, middle-class boy who smokes a little pot now and then because it makes him feel good inevitably comes in contact with people who are selling and using more high-powered drugs. The odds are that sooner or later he is going to try a little heroin just because everybody else is. It’s not the pushers who make addicts, the Mounties told me — pushers won’t. sell to people unless they know them very well. It’s addicts who convince their friends to try it just this once. It’s an axiom of the drug racket that addicts make other addicts. Eliminate all drugs, the narcotics squad reasoning goes, and you eliminate the drug addicts and halt the spread of drug addiction.

"You mustn’t confuse the drug with the milieu in which it is used,” Dr. Marie Nyswander told me, by way of giving her side of the story, which happens to be the other side of the Mounties’. Dr. Nyswander has written one book and several scientific papers on the care and treatment of drug addicts. Most of her patients are hooked on heroin but some of them are on nothing stronger than marijuana. A few years ago, she worked with a college student whose case history reads like an extension of the story which begins on the opposite page. One of Dr. Nyswander’s biggest problems is the law that prohibits her from prescribing drugs to her patients. They call her up and say, "Doctor, I’m going out to steal tonight if you don’t give me a prescription.”

"I tell them I’m a coward and can’t do it,” Dr. Nyswander says. "But sometimes, when one of them kills himself with an overdose of heroin, my cowardice becomes a little hard to live with. I feel as though I am partially responsible for their deaths. That is not the sort of thing I was trained to do as a doctor.”

She believes that there is such a thing as psychological dependence on marijuana. Heavy users show several characteristic symptoms. They lose interest in their work, their surroundings and finally their appearance. They are unable to function in the world and spend their time smoking marijuana instead of facing up to their daily responsibilities. By this time they are up to five or six marijuana cigarettes a day and may be properly called addicts. “When a drug such as alcohol or marijuana is used for anything other than handling the normal tensions of life and instead gets involved with handling of mental imbalances,” Dr. Nysw'ander says, “it is evidence of severe anxieties and problems of character that belong in the realm of — and can usually be helped by — psychiatric treatment.”

Some of the most advanced thinking in the treatment of addicts of all kinds is being done by the men and women who work for Ontario’s Alcoholism and Drug Addiction Research Foundation. Dr. S. J. Holmes, clinical director of the foundation’s narcotics - addiction unit, classifies all drugs, including alcohol, coffee and nicotine, as “chemical supports.” In this complex, high- pressure world, most people need some kind of chemical either to calm them down, as heroin and aspirins do, or rev them up as marijuana and coffee do. But some drugs, like coffee, alcohol and nicotine are socially acceptable. So are the people who use them to excess. Others, such as narcotics, force people outside the law. This makes treating the narcotics addict — that is, giving him something less debilitating than narcotics to lean on — all the harder.

But Dr. Holmes does not go along with the Lancet suggestion that marijuana be made as easily available as alcohol. For one thing, marijuana’s tendency to distort perspectives of space makes any marijuana user who happens to be driving a car a public menace. Instead, he would allow people who crave drugs to obtain them without being labeled criminals. This would separate them from the gangsters who prey on their addictions and give the doctors a chance to rehabilitate them. “It is time we stopped being moralistic about drugs,” Dr. Holmes told me. “We should treat all chemical supports alike and try to help the people who are addicted to them in the proper clinical setting."

This kind of idealized treatment would cost money, of course — a lot of money. When I outlined Dr. Holmes’ scheme to a thoughtful RCMP officer, he asked, “Do you really think the people of Canada are prepared to spend millions of dollars on drug addicts when there are so many other things that have to be done? After all, the drug addict inflicted his problem on himself.” He pointed out that as the anti-narcotics law now stands, the public is probably getting top value for its law-enforcement dollar. Even when narcotics are available, police pressure restricts them to members of the underworld. The casual thrill-seeker is protected from himself because the pushers won’t sell to him. The pushers never know when a stranger will turn out to be an undercover Mountie. Occasionally, the police are able to dry up completely the supply of narcotics in a given area for a limited amount of time. This forces the addicts into the “cold-turkey” cure. It’s harsh, but it’s also effective.

It is too easy, as some of the doctors I spoke to did, to dismiss the police as insensitive and unimaginative. After all, they see more drug addicts than the doctors do. What’s more, the police see the addicts in their ugliest moments. Inspector Herbert Thurston, head of Toronto’s morality squad, would like to see the marijuana smokers receive stiffer prison terms. “I’m not a moralist or a religious fanatic,” he told me, “but only ten years ago, if someone brought marijuana to a party, he’d be thrown out on his ear. Today people who should know better will have a smoke with him. Marijuana is just part of the much larger problem of lowering moral standards.”

It is hard, if not. impossible, for a layman to choose between the realistic policemen and the idealistic doctors. The only drug user I know is the man whose story begins on this page. As worked with him on this story, I found myself vaguely disapproving of the kind of life he unfolded for me. His rationalizations were a little too glib, his people too self-indulgent, too preoccupied with their own appetites and whirling emotions. My vague uneasiness persisted until Inspector Thurston summed it up when he told me, "Morality is nothing more nor less than self-discipline.” 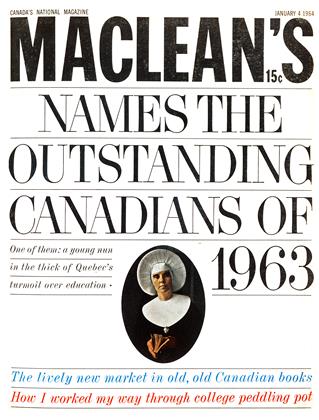