WHEN OPPOSITION LEADER Diefenbaker criticized the reporting of Parliament in Canadian newspapers, in his speech to the Conservative thinkers’ conference in Fredericton last month, he reopened a sore subject. Conservatives are not alone in thinking themselves ill-treated by the press. Liberals, New Democrats and both kinds of Social Créditer feel almost equally aggrieved, and don’t mind saying so to their friends (if that is the right word) in the press gallery.

But in the present state of party politics, there isn’t much hope of improving this situation. Politicians may close ranks in denouncing the press in general, but they can’t resist taking advantage of any particular distortion or misunderstanding if it offers a convenient weapon for partisan warfare. Misconceptions are magnified by political debate until the final impres-

sion bears no resemblance at all to what was said in the first place.

Two classic, textbook examples of (his difficulty occurred a few weeks ago when the assembly of the Atlantic Treaty Association, a purely private group devoted to the aid and comfort of NATO, met in Ottawa for its tenth conference.

Dr. Robert .). Sutherland, a scientist who is one of the defense minister’s advisers on operational research, was invited to address the ATA conference on “The Defense of North America.” As any civil servant knows, this is a touchy subject.

Knowing this, Dr. Sutherland wrote his text in cautiously academic language and sent a copy to Defense Minister Paul Hellyer. Hellyer sent it back with a facetious note scrawled in the margin: “This strikes me as a professorial explanation of what Shakespeare really meant, three hundred years after the event,” It was a purely factual survey of the North American air-defense system, carefully purged of everything but the most self-evident statements of fact, particularly designed to explain why NORAD (North American Air Defense) still has a useful role to play, despite the advent of the ballistic missile. NORAD can’t even detect a ballistic missile, let alone stop one, but Dr. Sutherland pointed out that as long as the Soviet bomber fleet remains in existence, the defense against it is still necessary.

"It is beyond question that within the total spectrum of western military programs, the importance of North American air defense has diminished,” he said, “but it has not diminished to zero, nor is it likely to diminish to zero within any period of time that is relevant to military pi an ni ng. ’ '

He was a little startled, therefore, to read a Canadian Press despatch in the next morning’s papers: “One of Canada’s top defense policy planners said today the importance of North American air defense, on which the United States and Canada have spent about fifty billion dollars since 1949, has diminished.”

The quotation was quite accurate, but the point Dr. Sutherland intended to stress was contained in other sentences of the same paragraph: “The ballistic missile has not entirely replaced the manned bomber as a strategic

delivery system. The Soviet Union retains a significant bomber force. The manned bomber continues to possess certain advantages, and this would be even more true if there were no defenses.”

“1 really don’t understand what happened,” Dr. Sutherland said later. “There were two stages to it — first, the story sent out by Canadian Press, and second, what was said in Parliament, adding up to a total of one hundred and eighty degrees. The mathematical equivalent of this,” he added thoughtfully, “is two multiplications by the square root of minus one.”

What happened in Parliament was this: As soon as the House met, NDP leader Tommy Douglas jumped up with a question based on the morning’s front-page headline: “In view of the fact that this (Sutherland statement) vindicates the position taken by this party (against nuclear arms), i should like to ask whether the government now intends to begin negotiations with the U. S. to discontinue maintenance of BOM ARC missile bases on Canadian soil?”

After Defense Minister Paul Hellyer had fended that one off, John Diefenbaker weighed in with another loaded question.

Meanwhile, back at the ATA assembly, Fate was setting a similar booby trap for another innocent bystander—Livingston T. Merchant, a retired U. S. ambassador who had served two highly successful terms in Canada, and who’d been invited to speak on “North America and the Atlantic Community.”

Nearly two years ago, the late President Kennedy called Livingston Merchant out of retirement to be his personal emissary to other NATO governments on behalf of the so-called “multilateral force” — the project of mixedmanned ships drawing crews from all NATO countries, and bearing nuclear arms over which every ally would have a veto. It was, and is, a scheme for sharing the custody of nuclear weapons, and although it has had a rather cool reception in other capitals (including Ottawa) it is still the avowed policy of the United States.

At the ATA meeting, Merchant devoted exactly one sentence of his prepared text to the multilateral force (he cited it as an example of co-operation that the allies might adopt). Two nights previously, before Merchant arrived in Ottawa, Paul Martin had also devoted one sentence of a sixteen-page speech to the multilateral force, saying it “does not really meet the preoccupations of those who are looking for a

After Merchant had delivered his prepared speech, one of the Canadian delegates asked him to say a bit more about the multilateral force, on which he is an acknowledged expert. A British delegate, a retired naval officer, took fifteen minutes to attack the MLF as militarily useless, though he admitted it might have some political purpose. Thus prodded, Merchant got up again to give a brief, lucid summary of the American case for the multilateral force. He made no mention of Canada, no mention of Paul Martin’s speech (which he had read, but hadn’t heard), and no criticism of any country.

Later, looking back on the events of the week, a Canadian civil servant said: “It’s getting so the Americans who come here are scared to say anything about anything. They’ve just no way of knowing what Canadians will think they said.” 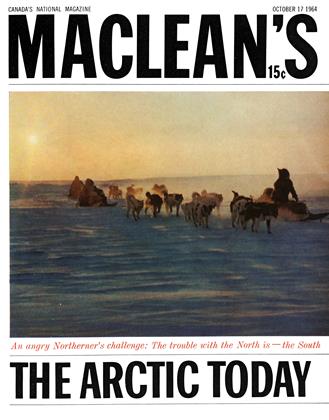