NEVER IN CANADA’S HISTORY have our young people had so much money, freedom, comfort, security, opportunity, as they have today. And never in Canada’s history have so many of them complained so loudly about being bored, about having “nothing to do."

They air their boredom in the villages, in the towns and, most astonishing of all, in the big cities like Montreal and Toronto and Vancouver, where things to do and see run into the hundreds.

Because these young people are bored, they cause trouble of one sort or another. In Toronto’s sprawling suburb of Scarborough township. rowdyism became so bad during August that township authorities sat down to a let's-tal k-it-over meeting with the teenagers concerned. As reported in Toronto newspapers, the officials told the fractious youngsters about Scarborough’s social and athletic facilities, with this result;

“The youths agreed not to resort to rowdyism as a cure for their boredom. They said they had never before been certain what sort of recreational facilities were available to them. They had never asked, they admitted, but nobody had ever pointed them out, either.” It's a sad state of affairs when young people have “nothing to do,” sadder still when they won't even stir themselves to find out what there is to do. And in, of all places, a metropolis that is grow ing as dynamically as any in the world, that attracts visitors from all over the world. If the manifold life and activities of a great city do not interest young Canadians, what will?

Perhaps all of us — parents, teachers, preachers, politicians, writers and broadcasters — are partly to blame for the boredom that afflicts our young people; not all our young people, to be sure, but enough of them to make themselves heard and felt. Perhaps we have failed to show them (are we fully conscious of it ourselves?) that they live in an intensely interesting country, with so many fascinating things to do and see that nobody could encompass them in a lifetime. Here’s Canada 1964, a big nation with big prospects, big prob-

lems, big everything. It's been opened up, put on display, in a manner that would not have seemed possible even twenty years ago. Travel has become amazingly fast and cheap. You can fly from Toronto to Vancouver between breakfast and lunch for less than a hundred dollars. You can go by bus for less than forty dollars and see Canada all the way — five huge provinces, every one of them stamped with its own colorful and vigorous personality.

Look the other way to St. John’s. From Toronto by plane, it’s less than five hours and less than eighty-five dollars. Here are five more provinces, quite distinct from each other and from the rest. That’s the mark of Canada’s wonderful variety. You would never mistake Newfoundland for Ontario, any more than you would mistake Alberta for Quebec. And there is still the North, with its stirring challenge to adventure and discovery.

How many of us, young or old, have really seen this marvellous nation we live in — this nation which gives us health, wealth, liberty, security and opportunity in a measure few other nations can dream of? Once we had climbed Signal Hill and Grouse Mountain, seen the great tides of Fundy and the thunderheads over Saskatchewan, eaten buffalo in Alberta and fiddleheads in New Brunswick, shopped at Place Ville Marie and along Portage Avenue, how could we talk ol being bored?

Some young people do travel in Canada; many more of them should. Some young Canadians move about from province to province, from job to job; many more of them should. Almost everywhere in Canada there is work, and rewarding work, for those willing to do it. You can hardly call yourself a Canadian unless you have lived in at least two or three of the provinces, mixing with their people, enjoying their particular color and savor. And now this is easier than it ever was before.

Young people are lucky in Canada today. They’ve inherited a fortune, and there it is, spread out around them, from the whales spouting among the icebergs in Conception Bay to the huge Douglas firs brushing the clouds on Vancouver Island — a nation to be understood, to be admired and to be loved. If our youngsters are bored and apathetic, perhaps the reason is that we, the adults, have not told them about their luck, have not informed them of their inheritance. We have let them think it’s dull to be a Canadian, when in fact there is nothing more exciting in the world. 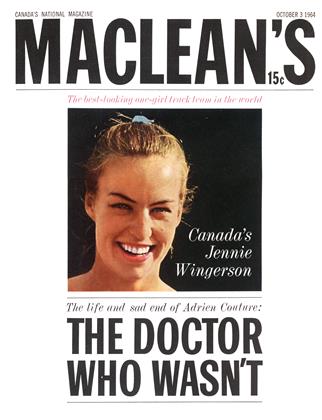