Who really invited the Queen? It was Dief, not Pearson

IT WAS NO SURPRISE that Opposition Leader John Diefenbaker chose an audience outside the House of Commons when he questioned the wisdom of inviting the Queen to Canada. He didn't quite go so far as to criticize the Pearson government for asking her, though he hinted that “some of us" had expressed doubts “privately." His technique was to say nothing definite, but to say it in ominous, portentous tones:

would have been interrupted, and reminded of an indisputable fact of history: The Queen was first invited to the 1964 visit to Canada in 1962, and her chief Canadian adviser at the time was the Right Hon. John G. Diefenbaker. That was the invitation she actually accepted, though by the time the acceptance came through, the prime minister was Lester Pearson.

Invitation and acceptance were both “informal” — i.e., not yet official or final, and certainly not publicly announced. But in fact the machinery of Commonwealth protocol had been in motion for two years by the time the “formal" invitation was sent from Ottawa to Buckingham Palace last December, and the “formal” acceptance dispatched on Christmas Eve.

The notion of a 1964 royal visit originated in 1961 with Premier Walter Shaw of Prince Edward Island. He thought it would be splendid if the Queen could come to Charlottetown to open the new Memorial Building, part of the centenary celebration of the 1864 conference which laid the cornerstone of Confederation. He asked the lieutenant-governor of P.E.I. to convey his request to the governorgeneral of Canada, who naturally referred it to the government of Canada before taking any action.

The Diefenbaker government approved the request — with how much enthusiasm is not recorded, but it did approve this request from a fellow Conservative down east. And since Quebec was the more important site of the 1964 conference, it was obvious that a centenary royal visit would have to include Quebec City as well. In November, 1962, the Diefenbaker government inquired of Buckingham Palace whether it would be possible for her majesty to visit Charlottetown and Quebec City in

It’s not quite clear whether Premier Jean Lesage was consulted at the time, and if so, whether he concurred. However, the point is academic. Premier Lesage was in London in May 1963, and was invited to tea at Buckingham Palace. He was so carried away by the Queen’s grace and charm that he told a press conference next day: “We French Canadians are royalists.” This statement caused some commotion when it was published in Quebec, and he has never repeated it, but it certainly expressed his sentiments at the time. By then, the new government of Canada had already been made aware that Her Majesty would be able to accept the invitation for 1964, to which she had given only a noncommittal reply the previous year. It's inconceivable that her forthcoming visit to Quebec should not have been mentioned, or that Premier Lesage should not have endorsed it warmly.

Pearson was in London at about the same time, and had his first audience with the Queen as prime minister of Canada. By then the Diefenbaker invitation had been “informally” accepted but not yet announced, or even “formally” extended. Should he have warned her then not to come?

It’s easy to say yes, with the wisdom of hindsight, but at the time it would have seemed hysterical. True, the first outbreaks of separatist violence had already taken place in Quebec — bombs in the mailboxes and all that — but they occurred even before the Diefenbaker invitation was extended, and things had calmed down in the meantime. The raids on Quebec armories, the bank robberies, the murder in the gunsmith’s shop were still in the future. So was the tragedy of Dallas last November.

In any case, whatever they ought to have done, neither of her Majesty’s Canadian advisers suggested

that she stay home. On the contrary, they bade her a grateful and loyal welcome. From then on, cancellation became more difficult by the minute.

True, the visit was not yet publicly announced, but more and more people came to know about it. Dozens, perhaps hundreds would have had to be told that the invitation to the Queen had been withdrawn, and why. Public protests would have been a certainty — Premier Shaw, if no one else, would surely have voiced his indignation. And the reason cancellation was impossible, once the visit became publicly know;n, was explained in a recent article in The Economist of London: “It was unwise to invite the Queen to Canada. It would have been still more unwise to cancel her visit, once arranged. When the head of a state cannot pay even a short visit to one part of its territory, the state loses reality. A cancellation would have been an avowal that Canadian unity was finished. It has not come to that yet.” 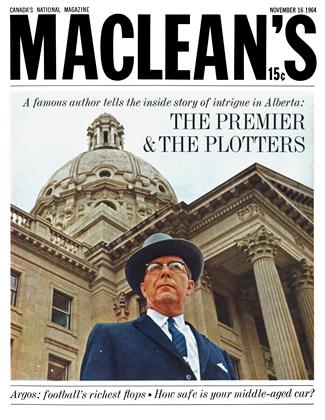