Frank Kelley’s article concerning national symbols (Britain Exploited Us — So Let’s Stop Saluting The Union Jack, September 19) is based on the false assumption that a desire for Anglo-Saxon supremacy and sentiment for Britain is behind the stand of the Red Ensign supporters. This is a rather cruel racial smear. The fact of the matter is that most Ensign supporters will accept a compromise flag that gives a greater play to the fleur-de-lis and a symbol, such as the maple leaf, which will appeal to all Canadians. It is a sense of history that begets this attitude — the same attitude that has caused Hawaii to retain the Union Jack as part of its state flag. - !.. U. SMITH, OTTAWA

^ Mr. Kelley's article is an excellent and timely discourse on a topic that most writers are too gutless to attack. Sharp criticism of those who obse-

quiously bow to England and things English is long overdue. The reason that so many Canadians pay homage to England is not so much because they feel any passionate affiliation with England, but rather that, they hate Quebec, and foolishly believe that an exaggerated, if false, affection for England will make Quebec nationalism subside. This, of course, is the opposite of what such affection accomplishes. Fortunately for those of us who have steadfastly fought against the enlargement of British influence in our country, the British star of international extortion and exploitation is fast waning, and the sooner it plummets irretrievably into oblivion, the better. - KFITH THOMPSON, FACULTY OF LAW, UNIVERSITY OF NEW BRUNSWICK, FREDERICTON

Please tell Frank Kelley that the road is perfectly free for him to return to the lands of his ancestors. —

^ Hurrah for Frank Kelley. His article was worth several years’ subscription. To say that the Red Ensign is a Canadian flag is, to put it mildly, pure fantasy. Why those Anglophiles think that a great country like ours should be satisfied with a second-string hand-me-down is beyond me. — LEN SKELTON, VICTORIA

Frank Kelley should remember that he is able to give voice to his antiBritish feelings because of British law and sense of justice. — EDWARD THOMPSON, HAMILTON ** Mr. Kelley talks of British exploitation. What exploitation? He doesn't cite one specific case. When was British North America a "subservient" market for British manufactured goods? The truth is that Canada has always been free to buy or sell in the markets of her choice. Who is asking us to be grateful to England? Why does he want to ask "Anglophiles" what it is Canada owes England to justify our allegiance to her flag? Canada doesn't owe England any allegiance and it isn't her tlag, it's our flag, by choice and usage, except for one province, which chooses otherwise. — GEORGE DUNSFORD, TORONTO

The Tucker—car of many styles

Your issue showing a picture of a Tucker car (Remember The Rage For Streamlining? September 5) says the car was steered from the centre, yet the picture shows the usual left-hand steering. Are you wrong, or the picture? -G. G. MARSHAM, LONDON, ONT.

Neither. Centre steering was one of the design ideas put forward by Tucker. Since the few Tuckers produced were largely handmade, the specifications varied from one Tucker to another. Some had sealed liquidcooled engines, others air-cooled. Some had automatic turbine drive, others conventional. All were experimental models.

A change from malarky

My sincere compliments on the article Where Marriage Guidance Goes Wrong (September 19). Dr. John Cuber and Peggy Harroff certainly reveal an attitude and practice both humane and practical — a refreshing change from the inane malarky expounded by the majority of their colleagues. In fact, this is the first time 1 can recall reading a marriage-counseling story that left the impression the counselor was accomplishing more good than harm. — MRS. ENID STEARN BERGSTROM, CHICAGO

^ The article was too one-sided and pessimistic. Let’s hear the positive and more helpful side from another counselor to balance up the picture. — REV. R. MCNEILL, GLEICHEN, ALTA.

If Julia Kiniski is Edmonton's “bestloved politician” (Portrait Of A GreatHearted Woman, September 19), then the rest of them are in very poor shape indeed. But not everyone in Edmonton is as credulous and naïve as you would make it appear. Anyone who talks so willingly and volubly about her philanthropies is full of something more than the milk of human kindness. — MISS C. M. M. NEILLY, EDMONTON ★ 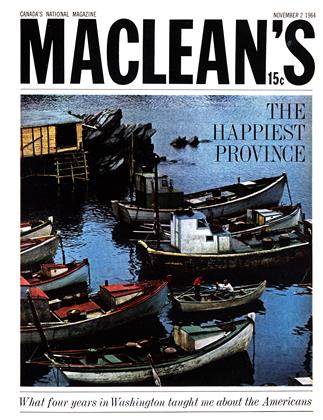