Would Canada be better off without Quebec? December 14 1964

I WRITE WHAT FOLLOWS not because I advocate Canadian separation. This I would not for a moment do; in fact, I would regard separation as the greatest possible calamity. Nor do I write out of any enmity toward my French fellow citizens. I have many good French-speaking friends and I have no reason for regarding them in any other light than my English-speaking friends. We are all Canadians together, and my fondest hope for years past has been that the two peoples could gain sufficient understanding of each other and sufficient mutual tolerance to enable Canadians to think of themselves as one, not as two, but as one with two parts. I have advocated the fullest extension of linguistic privileges throughout Canada, including school rights, and every other measure that would relieve my French-speaking fellow citizens of any occasion for feeling “second best."

If now I try to sum up the bill that might be presented to the Province of Quebec as the price for its leaving Confederation, I do so only because the constant talk of separation by extremists—and the almost equally constant remarks with implications of separatism on the part of people who do not put themselves down as separatists—makes me feel that we had better take a hard realistic look at what the separation of Quebec from the rest of Canada might involve. It is always best frankly and courageously to face the worst possibilities, rather than merely to hope that the storm will blow over.

But let me repeat, I do so in no spirit of enmity

toward my fellow citizens of French speech. And also, I do not confuse the Province of Quebec with the French-speaking people of Canada. The two things are quite distinct. Quebec is a province, a geographical and historical entity. It is virtually that old New France which passed from French rule with the capitulation at Montreal in 1760. The French-speaking people of Canada, on the other hand, are to be found in every province and no feat of political magic could possibly separate them from their English-speaking fellow citizens. What follows, then, is an objective attempt to consider what situation might arise if Quebec, the province, insisted on leaving Canada.

Instead of recoiling in horror at the possibility of an independent Quebec, I believe English Canadians should be seriously considering whether their interests would be better served with Quebec out of Confederation. French Canadians, after all, are not the only nationalists north of the international boundary; English Canada has national aspirations, too, and it is possible that it would be in a better position to fulfill them if Quebec, politically speaking, were out of the picture.

I am not advocating separatism and I am not indulging in a hymn of hate against “the French,” but I am suggesting that the so-called “dialogue” between Canada’s two peoples might be a great deal more fruitful if we considered separation at least as a possibility and tried in hard-headed fashion to see what it involved. Although it is desirable to try to save most marriages, it is only realistic to

“If the idea of separation were to be frankly accepted, hard bargains would have to be driven”

consider the possibility that the marriage contracted in 1867 might, in the •course of events, end in divorce. There are only so many concessions that the

central government can make to Quebec nationalism; and it is possible that the point could be reached where no further peace offerings could be made.

English Canada, for instance, might agree to allow the ten provinces to appoint senators to the national parliament on a “rep-by-pop” basis. But would it be willing to go farther? Already there arc demands from Quebec for more than that. The Montreal branch of the Saint Jean Baptiste Society and Daniel Johnson, leader of

Quebec's Union Nationale opposition, are among those who have suggested transforming the Senate into a "chamber of two nations,” with half the senators from Quebec and the other half from English Canada. Few English Canadians would accept this proposal. It would probably involve the subordination of the House of Commons to the Senate, and it would mean that Canada's two "nations” would be held together by only the

most tenuous of links.

If Canada is to stay united, then in the interests of simple justice a change should be made in the field of education. Provincial school laws should be revised to provide for the right to educate French-speaking schoolchildren in their own language. BLit such a relaxation will not occur if “separate schools” are once more merely identified with Roman C'atholic schools; for the sectarian issue — a*s opposed to the linguistic — would reawaken most of the old bitterness.

If the idea of separation were to be frankly accepted, hard bargains would have to be driven. Since the demand would come from Quebec, it would be Lip to Quebec to present its proposals, and for the rest of the country to decide whether or not to accept them. If Quebec wished to get otit of the bargain it made in 1867, it would only be fair for it to be ready to pay for the privilege.

What would the payment be? No one can say with exactitude, but unless the rest of Canada ignored its own interests, the price would be high.

Who would control the Seaway?

To begin with, Canada cannot afford to be broken in two by a foreign power on the banks of the St. Lawrence. It is virtually certain that as one of its first steps, an independent state of Quebec would establish its own system of tariffs and surround itself with a ring of custom houses, complete with all the familiar bureaucratic annoyances. But far more serious than that, speaking in hard terms, Canada cannot afford to have its overseas trade and relationships subject to interference at the Port of Montreal by a foreign, and perhaps unfriendly, government. A bill of divorce, therefore, would by necessity require Quebec to renounce any rights to establish border customs offices and to control the Port of Montreal and the St. Lawrence Seaway.

There would also have to be insistance that Quebec pay a pro rata share of the national debt. On March 31, 1964, the net debt totalled somewhat more than fifteen billion dollars. Quebec's share (census of 1961) would thus be four and a quarter billion dollars. Nor is that the extent of the financial burden it would have to assume. It would also be fair for it to pay its share of the CNR debt which in September of this year was near a billion and three quarter millions of dollars.

Canada would also have to exact from Quebec firm military and strategic concessions in return for separation. A ready and unhampered right of military, air and naval access to the Gulf of St. Lawrence and the Port of Quebec would be required. And to assure continuity in trade and in political and social relations, there would have to be a guaranteed rightof-way between Ontario and the Maritime provinces.

Quebec as an independent state would have little claim to the territory of Ungava, for this was given to it by Canada as a whole when there was no thought of it (Quebec) being anything else than a “province" like other provinces. Ungava never formed part of the original “New France.”

Some will ask: what about the

“English” of Quebec? Could the rest of Canada, in negotiating a separation agreement, abandon them to the mercies of a new nationalist government? The short answer, in my view, is yes.

While Canada would probably be disposed to make the best bargain it could for them, it would be pointless to worry too much over the nonFrench groups of Quebec, the majority of whom live on the island of Montreal. No “English" newspaper or institution — apart from such small groups as centred around Dr. Frank Scott at McGill's faculty of law — said a public word against the Duplessis regime. In South Africa, the English - language press has at least spoken out courageously against the oppressive racial policies of the Verwoerd government; but no sLich English voice was ever raised in Quebec against Duplessis. With individual exceptions, the non-French groups of Montreal, split into a dozen subgroups with little relationship to each other, are morally and spiritually bankrupt. Collectively, they arc hardly worth fighting for.

In similar fashion Quebec would have to abandon the French minorities in the rest of Canada. These minorities would no longer be able to claim collective rights.

For the rest of Canada, freedom from Quebec might well be freedom from a millstone. Were the brakes off, there are a dozen different directions in which rapid moves forward could be made — morally, economically and legally. Foreign policy would take on a simplicity and unanimity that at present it cannot have. Why should “Canada” keep in step with “Quebec,” a collectivity whose attitudes are so remote from, and in some respects so out of tune with, the modern world?

The answer most frequently heard is that, without Quebec, the rest of Canada would instantly be absorbed by the United States. Leaving aside the interesting question of whether the U. S. would want to absorb it, one may disagree.

Today as always, there are two factors preventing English - speaking Canada from becoming a genuine community with enough agreement within itself, enough common will, to act effectively in vital matters. One is the U. S. The other is the Province of QLiebec.

Far from facing absorption, a Canada without Quebec might soon find its feet against the U. S. In deep essentials, it would speak with one voice, as it cannot do now. And added fears of absorption would make absorption even less likely. English Canadians today have gone far enough on the road to nationalism to preserve them from becoming Americans. Quebec does not help in this respect. Today it hinders.

There is another point to be faced very sternly and coldly. The present tide of emotion in Quebec could eventually break the dikes, and Canada, our common country, might be faced with another Fort Sumter. To me, this would be the ultimate catastrophe. the destruction of my country. Let us, before it becomes too late, reckon Lip the accounts. ★ 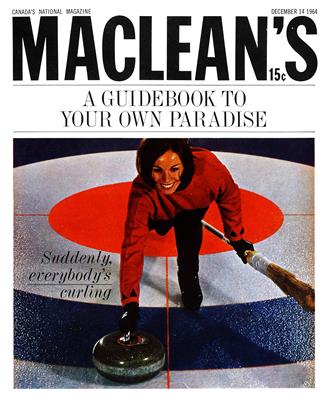