Has success spoiled My Fair Lady? No, just dampened it Wendy Michener December 2 1964

STRANGE THINGS HAPPEN when big Broadway musicals get transferred from stage to screen. Ordinary shows spring into new life, good ones get better, and some of the very best die a lingering death. My Fair Lady, Ferner and Foewe’s musical capitalization on Shaw’s Pygmalion, has made it to the screen alive but, contrary to my expectations, not kicking. It has all the regal grace and cautious pace of a dowager duchess. But then it is, after all, eight years old. At the rale fashions change in North America, that makes My Fair Lady the Adenauer of the entertainment world.

Success has not exactly spoiled My Fair Lady, just weighed it down. Success kept the show on Broadway for a record six and a half years, while the marvelous songs became as inescapably familiar as national anthems. Success, too, pushed (he price of movie rights up to $5,500,000. With an investment like that, you don’t fool around. No gambling, no experimentation — just sure bets.

One of the surest bets was Cecil Beaton, whose extravagantly stylish designs are the picture’s chief distinction. Beaton kept a diary of his year’s work (Cecil Beaton's hair Lady, Rycrson $5.75) which reveals indirectly why the movie is joyless. You can feel the enthusiasm of everyone connected with the production changing, little by little, into a seventeen-million-dollar anxiety for success.

The strain shows most of all in Audrey Hepburn’s performance as Eliza Doolittle, the cockney sparra (ain’t it a shame sparras can’t sing?) who breaks into high society after Professor Higgins (Rex Harrison) teaches her how to speak. (The rest of her upper-class accomplishments are boned up in a scant six weeks!) She was hired partly because Julie Andrews, the original Eliza, didn't have a bankable name at the time, and this must have been very inhibiting. Miss Hepburn gives one of the best acting performances of her career, completely suppressing her hoydenish mannerisms; but she is so tensed up with the effort that she is practically anonymous even in Beaton’s flattering costumes.

The famed Hollywood technology has only added to the regimented atmosphere. Great effort was expended on visual realism, but the sound is strictly from fantasyland. Four mouths open and a dozen voices pour out. The prerecorded six - track stereophonic sound track reduces the actors to singing puppets. Even Stanley Hol-

loway looks practically embalmed in his two should-be show-stoppers. Little Bit O’ Luck and Get Me To The Church On Time.

None of this is new to My Fair Lady, of course, but Rex Harrison’s dashing performance points up how needless and damaging it all is. Harrison insisted on recording during or immediately after shooting, instead of weeks later in the vacuum of a recording studio. He was thus free to seize on the inspiration of the moment—and it shows, how it shows. There are other good things to be said about the picture, but it fails in the one really crucial area. A musical that doesn’t communicate physical joy is as pointless, it seems to me, as a tragedy that fails to communicate sadness.

Walt Disney’s Mary Poppins is an obviously derivative confection (My Fair Lady out of Fantasia), but it does have the moments of excitement, the freshness and ease that My Fair Lady lacks. And it has Julie Andrews as the Nannycum-fairy-godmother of P. L. Travers’ famous children’s books. Disney, with his own bankable name, could afford to trust his own judgment, and Julie comes through with the all-out charm of an understudy getting her first big chance at stardom.

Disney also dares to take liberties with his not-so-expensive material. Most of the script changes are designed to make Mary Poppins understandable to a nannyless nation. The action, for instance, is cast back to 1910, that magical prewar era when servants were readily available, when ladies were modestly frilled from head to toe, and Englishmen believed in the Empiyah. In American terms a mother who had a nanny would naturally be a “career” woman, so Mrs. Banks has become a suffragette, while Mary Poppins has become a proselytizing nanny who stays until she has converted mummies and daddies back to active parenthood.

people coyness, and the plot is too goody-good for words. But even the worst parts are saved by an air of innocent enjoyment. And the best part, the chimneysweeps' rooftop dance, is worthy of the heyday of the original screen musical. Broadway adaptations are no substitute. 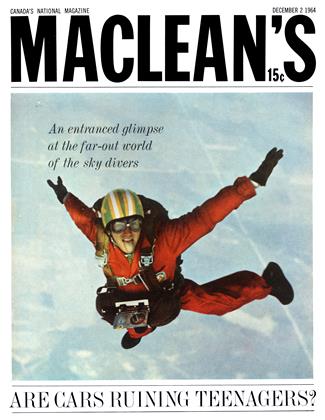