BILLY LIAR: A wry and penetrating tragicomic fable from Britain. The title role is graphically played by Tom Courtenay as a daydreaming North Country lad whose dissatisfactions force him to seek refuge in technicolored fantasies. Billy is the benign dictator and sex-king of an imaginary principality called Ambrosia. In real life he is an undertaker’s clerk with a tyrannical father, a fatuous mother, a scornful grandmother and two fiancées who share one betrothal ring. The adventures in Billy’s mind are less hilarious than the similar playlets enacted in Hollywood in 1947 by Danny Kaye in The Secret Life of Walter Mitty but much of the sociological satire in the British film is shrewd. Julie Christie delight-

23^* POINT OF ORDER: The army-vs.-McCarthy hearings in the spring of 1954 were watched by millions on television and lasted seven weeks. Now, the kinescopes of the drama have been trimmed down to a movie lasting ninetyseven minutes. The editing is adroit and impartial and the results are hypnotically absorbing. The film has stimulated fresh sales of an anti-McCarthy LP record called The Investigator in which Canadian actor John Drainie lampoons Senator McCarthy. 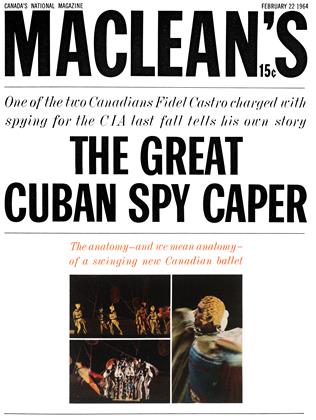