THE RUNNING MAN: Once again the word “man" in the title calls attention to the famed British director Sir Carol Reed, but his new venture is wan compared with such predecessors as Odd Man Out, The Third Man, and Our Man in Havana. A thief (Lawrence Harvey) and his appalled wife (Lee Remick) are playing cat-and-mice with an insurance investigator (Alan Bates), but the whole thing never quite works up an atmosphere of suspense.

DR. STRANGE LOVE is a hilarious and frightening horror-comedy with a marqueecrowding subtitle: How I Learned to Stop Worrying and Love the Bomb. Its creator, the American writer-director Stanley Kubrick, says the threat of a nuclear holocaust has become part of daily living and a valid target for satire. A psychotic U. S. Air Lorce general (Sterling Hayden) unleashes a wing of H-bombers against Russia and cuts them off from any possible recall. Peter Sellers' title role is that of an ex-Hitlerite scientist now working for Uncle Sam. Sellers also appears as a decentminded but ineffectual U. S. president named Mcrkin Muffley and as Group Capt. Lionel

Mandrake of the RAL. on loan to the Americans. Kubrick's approach, though irreverent, is far from sick: his film is a protest against the dehumanization which makes it possible for some strategists to mention “acceptable" casualties of tens of millions in the first few hours of a nuclear “victory.”

25P MONDO CANE (It's a Dog's Life) and WOMEN OF THE WORLD are a pair of multipart “documentaries” assembled by Italy’s Gualtiero Jacopetti under the guise of detached and ironic studies of the Human Condition. One or two episodes in each arc worth seeing, but sick sadism and sophomoric flippancy are dominant in both pictures. Typical shots: Bedouin women anointing their skins with camel dung as a cosmetic; other women, in huge close-ups, screaming in the agony of childbirth; ghoulish diners smacking their lips over a feast of fried ants, roast puppy and other delicacies. 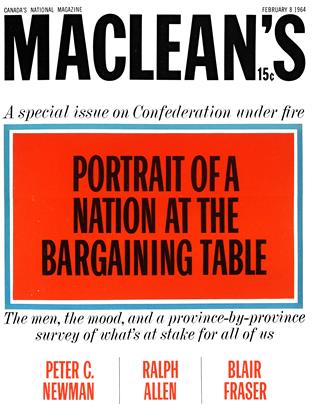