KÍM NOVAK, playing a lady sociologist, explained to the world in Boy’s Night Out that what a nice girl knows best is how to arouse a man’s interest without giving in to his advances. This kind of sexual brinkmanship lifted Doris Day to the outer reaches of stardom with Pillow Talk, the sleeper of 1959, and now, almost five years later, she’s still bouncing through movies that take her into the bedroom, but never into the bed.

But the latest Hollywood comedies devoted to the American dictum that sex is funny — Who’s Been Sleeping in My Bed? with Dean Martin, Man’s Favorite Sport? with Rock Hudson and Paula Prentiss, and even Move Over, Darling with Doris Day herself — indicate a change in the American sex mythology. The idea that a nice girl only says “I will” when she’s in church has been roundly challenged by Helen Gurley Brown in her book of etiquette, Sex and the Single Girl (the movie version will be released in the fall). And the popularity of Mrs. Brown’s book is at least some evidence that many women would — in the words of that breakthrough among sex comedies, The Moon Is Blue — “rather be occupied than preoccupied with sex.”

Does she or doesn’t she? Who would ever have thought to ask that question about Greta Garbo or Gloria Swanson? The question refers to that freckle-faced fighting spirit Doris Day and, as everyone knows, the answer is that she doesn’t. She just talks about it; in the parlance of the for-those-who-think-young crowd, she never goes the limit. She will probably go down in film history as the queen of the nonstrip tease.

NEW WRINKLES IN THE BEDROOM GAME

Her current picture, Move Over, Darling, deals in the same game of will-she-or-won’tshe but Doris Day is 39 now and a little past the ingenue stage. She has finally taken to playing married women with children. This, of course, taxes the ingenuity of the scriptwriters whose job now is to find reasons why she must not go to bed with her husband. In The Thrill Of It All she was a career woman and just never found time. Move Over, Darling has a legal reason. Doris returns after five years on a desert island to find that her husband is just setting out on a honeymoon with a new wife (Polly Bergen). For 103 minutes the action goes from bedroom to bedroom while the same man (James Garner) fails to bed two women.

Move Over, Darling is the w'orst of the whole sly Doris Day cycle, and the most extreme teaser, but what makes it a harbinger of a new code of American sexual comedy is that, here, even the leading man strives to stay continent. Rock Hudson and Cary Grant, heroes of earlier Doris Day movies, were playboys out for every girl they could get. James Garner, by contrast, fends off his eager new bride out of loyalty to Miss Day. He goes so far as to fake a back injury in case his will power runs out.

Who's Been Sleeping In My Bed?, a thin gag-ridden comedy, features Dean Martin as a Dr. Kildarc-style television star who also fights off women. “Hold me close Jason, I'm about to bare my soul,” announces a red-heád as she dances around, undressing all the while. And does he or doesn't he? Well, he doesn't, not even after he unloads his guilt feelings on a psychiatrist’s couch. Nobody goes so far as to suggest he is a virgin, but otherwise it’s Doris Day all over again.

Man’s Favorite Sport? continues the trend. It presents an emancipated Helen - Gurley -Brown single girl (Paula Prentiss, tall, dark and winsome), and a morally scrupulous male (the same Rock Hudson who stalked Miss Day through Pillow Talk and Lover Come Back). Man’s favorite sport in this Howard Hawks comedy is fishing, while woman’s, it seems, is man. True to the traditional censorpleasing form, Nothing Happens, but again it’s the man who resists.

Paula Prentiss, a delightful comedienne, presents a pretty attractive picture of efficient, glamorous, free-spirited girlhood. When she goes to Rock Hudson’s cabin in baby - doll pyjamas at midnight, she is not just teasing. Her problem is not how to say no nicely, but how to take the initiative without scaring away the man. Finally, in desperation, she says “Would you please like to kiss me?” For the first five reels she out-talks, out-fishes, outboats, out - drives, and out - manœuvres Rock Hudson, though of course he wins out in the end. All this should go down well with the large movie audience of young females, but it won’t do much for the reputation of the American male in Europe, WENDY MICHENER 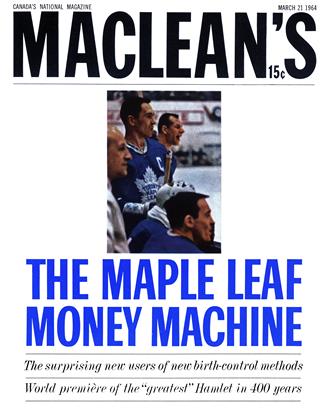