Why the Liberals cheered when the Tories stuck with Diefenbaker

WHATEVER MISGIVINGS may haunt eastern Conservatives about the confirmation of John Diefenbaker’s leadership until after the next election there is no doubt in the Liberals’ minds. They are delighted, and profoundly relieved.

Not that they ever thought he would he dislodged by the party meeting in February — the vote of confidence itself was a foregone conclusion. What some Liberals did fear was that the anti-Dicfenbaker rebels would be able to show him a writing on the wall, something clear enough to set things in motion for an orderly change of leadership by consent, some time within the next year. For those Liberal strategists who want an election by the spring of 1965 the strongest argument had been, “We don’t dare give the Tories time to choose a new leader.”

“When I have nightmares,” a Liberal organizer said a few weeks ago, “1 dream that Diefenbaker has resigned.”

Of course the Grits know (they have reason to know!) that Diefenbaker is a formidable campaigner, but they regard him as a known quantity. They know he can hold Saskatchewan. rural Alberta and Manitoba, parts of rural Ontario and Conservative pockets in the Maritimes. But he has all these already, and redistribution will cut them substantially below their present size in Parliament.

Rightly or wrongly, Liberals are convinced that this is all Diefenbaker can do. The Diefenbaker magic is a well-tried commodity, and it only works with some people. The same speech that electrifies supporters leaves opponents cold, or even slightly ill. The style has not changed and will not change — if the next election comes in the autumn of 1966, Diefenbaker will be seventy-one, and a man’s style is not really alterable at that age.

Liberals are therefore confident that he will not recapture Toronto or Vancouver, Halifax or Calgary, or indeed any of the larger cities that he lost in 1962 and 1963. They noted with satisfaction that although the rebels who voted "no” on the confidence motion in February were only a tiny fraction of the delegates there assembled, they represented these areas which Diefenbaker had lost and which the Conservatives must regain before they can return to power.

But of all the “lost territories” the one that is farthest beyond Diefenbaker’s reach is Quebec. There the Liberals feel not merely confident. They feel certain that Diefenbaker is a spent force — if, indeed, he can ever have been called a force at all in French Canada.

Diefenbaker himself seems to be quite sincerely mystified and hurt by French-Canadian hostility. “They said 1 was anti-Quebec,” he intoned in one of his February speeches, “and I said to them, ‘Produce one line, one word, that shows 1 was ever against Quebec.’ They couldn't do it.” Actually Quebec’s feeling is based less on words than on actions, or failures to act — in seven years of office Diefenbaker never designated a French-speaking lieutenant, or gave any French-Canadian a Cabinet post of consequence, or otherwise showed any comprehension of Quebec's status or aspirations. Also, his recent references to Pearson's “giving in” to Premier Jean Lesage sound like anti-Quebec statements to Que-

beckers, however they may have been intended.

But for whatever reason, just or unjust, it is a fact that Diefenbaker is political poison in Quebec. The Quebec delegation in February was small, but it was solid — solidly in favor of the secret ballot for the vote of confidence, and (so far as could be descried in that smoke-filled room) solidly against the confidence motion itself. When Léon Balcer was chosen as Quebec leader the next day, he was chosen by the Quebec caucus, not by Diefenbaker — Diefenbaker merely accepted the caucus’s choice, he did not initiate it. Balcer is well enough liked in Quebec but he, too, is a known quantity in his own province; he is unlikely to shift the balance of political sentiment much, under present leadership.

This is a godsend to the Liberals. For reasons outlined in this space two issues ago, the Liberals are in trouble in Quebec and they know it.

“Under any other leader,” said a prominent Liberal in Quebec City, “the Conservatives could beat us right now.” And the Grits know things will probably be worse before they are better. Given an acceptable alternative Quebec would probably vote against the government. For different but equally persuasive reasons, the big cities would probably do the same. This situation would be dangerous enough for the Liberals even if no acceptable alternative were in sight. But in fact such a man is available — Premier Duff Roblin of Manitoba. He is able to address Quebec audiences in fluent French, while Léon Balcer develops the same theme in other provinces in fluent English. He has a record of sound government in Manitoba that reassures the business community, and makes him attractive to the urban voter in general. And he is a native son of the prairie, well able to hold the western vote — provided, of course, that he assumes the leadership with Diefenbaker’s blessing, and not as the result of an intraparty battle (which Roblin has no intention of fighting).

The very thought of what a Roblin-Balcer team could do used to keep Liberal strategists awake at night. They’re pretty well resigned to having to face it eventually. But with Diefenbaker firmly in the Tory saddle, they feel they are safe for at least one more election. 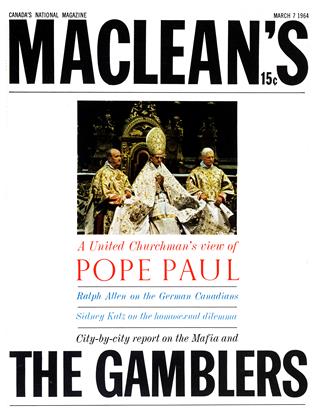