AN AMERICAN with an income of $5 million a year may find enough loopholes in the law to escape taxation altogether, but the poor still get soaked far more in the United States than they do in Canada. This remains true even after the biggest tax cut in American history and even though the recent Canadian budget included no substantial income-tax cuts at all. In Canada last year a single man with no dependents, earning $2,000, paid only one third as much to the federal treasury as his U. S. counterpart. Hé paid less than half as much if he earned $3,000 and just over half as much if he earned $4,000.

• The recent tax cuts in the United States have diminished the difference between the rates and will narrow the gap another fraction in 1965. But the. unmarried Canadian without dependents, earning $2,000, still pays only half what the American pays. At $3,000 he pays a bit more than half and at $4,000 roughly two thirds. A married taxpayer without children, earning $3,000 pays $81 in Canada and $230 in the U. S. A married taxpayer with two dependent children, earning $3,000. pays $27 in Canada. Last year he paid $65 in the U. S. but under the revised schedule he pays only $4. On the surface this American seems to be $23 ahead of the Canadian. But if you take family allowances into account — the U. S. has none — the Canadian is ahead by more than $120. At $4.000, a married taxpayer with two children pays $125 in Canada, and. this ye^r, $164 in the U. S., so the Canadian is $39 better off even if you forget family allowances. .

On the other hand, the married taxpayer whose earnings reach $15,000 pays less in the U. S. than in Canada. Before the tax cut he

paid more in the Ù. S. — at least in theory. He may not have done so in practice, for if an American’s income is high enough to warrant the effort he can cut his tax bill sharply.

For instance, a taxpayer in the lower brackets, computing his taxable income, usually settles for what is called a “standard” deduction — the equivalent of ten percent of his income up to a deduction limit of $1,000. But he has the alternative of itemizing and claiming a long list of deductions — state and municipal taxes, contributions to churches, charities and approved institutions, medical expenses, and the interest charges on mortgages, loans and installment purchases. A $30,000-mortgage on a house, at six percent, subtracts $1,800 from taxable income. A $3,000-auto loan, at eight percent, subtracts another $240. If you have an old painting that you can persuade a dealer to value at $20,000 you can inflict it on some museum and slice $20.000 from your taxable income. Indeed, the ways of lightening your tax load in the United States arc almost endless and the higher your income is the more ways there are. A study of 1,006 tax returns filed by people with incomes above $500,000 shows that on an average they paid less than twenty-eight percent in taxes, although they were in a category for which tax rates were eighty-seven percent. Six people with incomes above $5 million paid no taxes at all.

John Kennedy first, then Lyndon Johnson, urged Congress to eliminate the worst of the loopholes and collect an extra $4,900,000.000 from the richer Americans. But Congress listened instead to the lobbyists of the wealthy and rejected the principal tax reforms proposed. It also, in cutting the rates, cut the top rates more than the lower ones. While the first reaction to the tax cut was thanks, and the second was an outbreak of gratified statements about the government's recognition that free enterprise can fix the economy,, a third reaction has now set in — an uneasy one. Americans are wondering whether the tax cut won’t launch another round of inflation. If it’s inflationary won't it make poverty worse instead of combatting it? Was it advisable for the U. S. to cut taxes, and put another $25 million a day in the hands of consumers, when prices were already rising and when Britain was trying to check inflation by raising interest rates? And wouldn't it have been preferable for the government, instead of reducing corporation and personal income taxes by a total of more than $11 billion, to have directed that amount into subsidized housing, urban renewal, transportation facilities, schools and hospitals?

The answers to such questions won't be known for a while. It will take months for the impact of the cuts to be felt much in distressed regions or for work to open up for the hard-core unemployed, if it ever does open up. But for most of the U. S. economy the short term prospects are for brisker business and perhaps even a boom. There should be beneficial side effects in Canada. 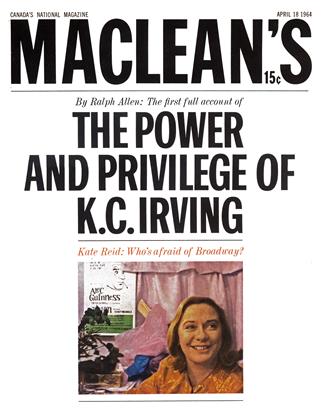