TWO ONTARIO WOMEN died after operations this winter with surgeons' clamps left in their bodies. The first was Miss Patricia Morgan. 32, of Toronto, and in February a coroner's jury found her death in Toronto’s East General Hospital had been caused by “misadventure." Her surgeon, Dr. Kenneth Brown, was responsible for leaving the clamp inside her. the jury decided. The clamp had caused the “acute intestinal obstruction with gangrene of the small bowel’" that led to her death.

Only days after the headlines about Miss Morgan — and the four-day ordeal by public scrutiny of East General — had subsided, the second case broke. An autopsy revealed that a surgical clamp was floating in the peritoneal cavity of Mrs. Ena Noer, of Palmerston, who had died following an operation in the Palmerston General Hospital.

Early in the investigation of Mrs. Noer's death — before even the doctor or doctors involved were named publicly — there were several apparent similarities between the two cases. And there were several questions raised by the death of Miss Morgan, and the subsequent public inquest, that still seem to require answers. What follows is what I have found out about the light the Morgan case shed on them.

■ Who decides when a surgeon is qualifiedo operate? Legally, any graduate of a medical school licensed by the province in which he works can perform operations. In practice, a surgeon does five years’ postgraduate work and passes an exam set by the Royal College of Physicians and Surgeons, the body that passes judgment on the competence of surgeons. That doesn't mean a graduate surgeon can walk into any hospital and start performing operations. It's up to each hospital to decide who will use its operating rooms. Dr. Brown. Miss Morgan's surgeon, has impressive credentials.

He has been an army doctor, coroner and medical health officer; he studied cancer on a Banting-Best research fellowship and lectured at the University of Toronto in 1959-60.

Dr. Brown has had operating privileges at East General for ten years. He operated on Patricia Morgan last spring for cancer and removed a large part of her stomach. The operation in October, the fatal one. was to remove a stomach obstruction. For the previous two years Dr. Burns Plewes, East General's chief surgeon, has had doubts about Dr. Brown's competence. He could have canceled Dr. Brown's operating privileges but he hesitated to do this. It amounted to taking away Dr. Brown's livelihood.

Instead, for the second operation on Patricia Morgan Dr. Plewes asked Dr. Anthony Varga, the hospital's senior resident — a surgeon on the staff — to assist Dr. Brown and to report to him if anything went wrong. The inquest learned that something did go wrong: Miss Morgan bled profusely and her blood pressure dropped alarmingly. Dr. Varga sent for Dr. Plewes, who advised Dr. Brown to end the operation as quickly as possible. Dr. Brown argued for several minutes with Dr. Plewes and then stepped away. Dr. Varga finished closing the incision. At the inquest Dr. Plewes admitted that “with hindsight." he had probably made a mistake in allowing Dr. Brown to operate on Miss Morgan a second time. He canceled Dr. Brown’s operating privileges the afternoon following the operation. Judging a surgeon’s competence. Dr. Plewes explained, is a “matter of degree."

THE X-RAY THAT WASN’T TAKEN

■ Who is responsible for a patient iti a hospital? At the Morgan inquest, the crown's expert witness, the chief surgeon at the Toronto General Hospital, testified that in his opinion a surgeon is responsible for his patients until they leave the hospital. Miss Morgan lingered for eighteen days after the operation. An X-ray might have revealed the clamp but Dr. Brown didn’t order one. He testified that he thought his privileges to order X-rays had been removed at the same time as his operating privileges. Dr. Plewes said that Dr. Brown could have ordered an X-ray if he'd wanted one. The internes and staff doctors at East General also could have ordered the X-ray and even performed the operation that might have saved Miss Morgan's life. Bui they didn't. Miss Morgan was Dr. Brown's patient.

Theoretically, a hospital is responsible for everyone who comes there to be healed. In practice, a number of doctors have explained to me. a patient's treatment is left pretty much to the doctor who bring«the patient in. The

doctors asked me not to use their names — doctors are very ethical about criticizing one another in public — but one Toronto surgeon told me a story to illustrate the terrifying absurdities professional courtesy can lead to. 5 surgery patient bled to death internally in m> informant's hospital because the surgeon hail given strict orders that no one was to touch his patient and he himself was too bus\ to visit the hospital.

• How many deaths by "misadventure" an never reported to the The morning after Miss Morgan died on November 5. the hospital held an autopsy and discovered that clamp. At the inquest East General's chief pathologist testified that two loops of intestine had wedged themselves into the handle of the clamp, blocking normal functions. The pathologist told Dr. Brown that he had better notify the coroner. The Coroner's Act states clearly that any death occurring in circumstances that might require investigation must be reported. Dr. Brown listed acute intestinal obstruction which is an accurate wav to describe the result of leaving the clamp in Miss Morgan — on the death certificate and never did get around to notifying the coroner. Mrs. W. A. Neate. Patricia Morgan's sistei. wasn't satisfied with Dr. Brown's explanation. She badgered him for more details and in midDecember he told her about the clamp. Mrs. Neate's suspicions grew until, at the end ol January, she wrote to Toronto’s chief coroner. Dr. Morton Shulman. and asked for an inquest. Dr. Shulman asked East General for a copy of the autopsy report, then notified the Ontario Attorney General's Department and the Attorney General ordered the inquest that exposed the whole sorry mess at East General.

THE MISTAKES THAT ARE BURIED

Mrs. Noer's death certificate, in Palmerston, gave peritonitis as the cause of death, but in Palmerston the autopsy report was apparentiv forwarded immediately to the local coroner.

No one knows, of course, how many such cases like Patricia Morgan's are never reported. Dr. Shulman says that of the several letters like Mrs. Neate's that cross his desk every week only a very few turn out to have an\ real substance. Dr. Gerald Blanchet. one of the coroners for York County, told me that in hi«ten years on the job the Morgan case was the only one of its kind he'd ever come across. Blanchet frequently asked tough and embarrassing questions himself just to be sure that no one would ever be able to say the Morgan inquest was a whitewash. The private doctors I spoke to assured me that the number of instances of negligence and malpractice is negligible. I believe them. After all. I trust my family doctor. But the doctors at East York, by their fumbling, raised the ugly question of whether some doctors and hospitals conspire to bury their mistakes, and it will be a long time until they, and indeed the whole medical profession, can answer it reassuringly.

At East General, meanwhile, business seems to be going on as usual. When I went to see Eric Willcocks; the hospital's administrator, he explained that although he'd agreed to be interviewed, his solicitors had advised him not to discuss the case with me. But he did feel free to point out that East General's operating rooms are still booked five months in advance. Only two people scheduled for operations had called the hospital and Willcocks had been able to reassure both of them. As for morale among the staff, it was generally good. “Our staff is loyal to this institution." Willcocks said. "When their hospital is in trouble and other people are attacking it. that just increases their loyalty. You can say that: our staff is very loyal." DAVID LEWIS sTEIN 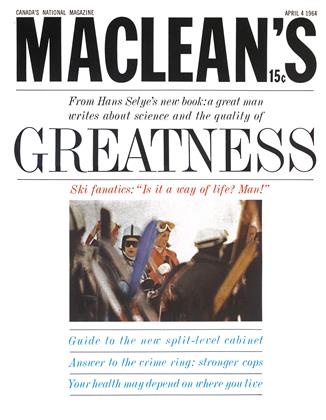