BACKSTAGE IN OTTAWA Blair Fraser May 16 1964

WHEN KING DAVID COMMANDED JOAB, the Captain of his host, to go forth and number the men of Israel, it was counted such a grievous sin that a pestilence descended on David's kingdom. (The prophet Gad offered him a choice between three days of pestilence and seven years of famine and the king chose pestilence in order to get it over with.) But what the second book of Samuel omits to explain is why it was such a sin to number the people. What harm did it do?

This ancient unanswered question has lately become pertinent in Canada. The role of the prophet Gad is being played by John Diefenbaker, leader of the opposition, who has been calling down the wrath of heaven on the Pearson government for trying to give new' social insurance numbers to as many Canadians as possible. Except for an obscure remark that the new numbering system “bears a strange relation to dictatorship,” Diefenbaker has not explained just what fault he finds with it, and officials of the Unemployment Insurance Commission, whose project it is, are honestly mystified.

The main object of the exercise is to replace a numbering system which has been in use for nearly twenty-five years but is now obsolete. Existing unemployment insurance numbers begin with a letter; the electronic computers in use here cannot read letters, only digits. But in addition to being illegible to computers, the old unemployment insurance numbers were unsatisfactory for another reason.

The old cards at the central registry didn't contain enough information to identify the people whose names they bore. The registry has. for example, fifty thousand people named

Smith of whom ten thousand have the first initial J. The card allotted to each J. Smith carried only his birth date and his address. If two J. Smith’s happened to have been born on the same day they were hopelessly confused in the unemployment insurance records and if one J. Smith lost his unemployment insurance book and took out another one from a different address he then appeared in the registry as two J. Smiths.

The new cards will get around this difficulty by including two new items of information. Each applicant is asked his father’s first name and his mother's maiden name. The odds against any tw'o J. Smiths both having mothers named Jones and fathers named Harry are astronomical.

For the four million Canadians who are eligible for unemployment insurance, registration is compulsory — as it has been ever since unemployment insurance was first enacted. For the other two-and-a-half million members of the Canadian labor force, registration is voluntary. They arc being asked to register now in order to save trouble later, when the Canada Pension Plan comes into effect.

Diefenbaker has made a great point of asking whether the information contained in the cards is to be confidential or made available to other departments. The fact is that the unemployment insurance registry has always been available to government departments. Every income-tax return includes the taxpayer’s unemployment insurance number, if he has one. The departments of Labor, Immigration and Health and Welfare also use the registry from time to time. The Unemployment Insurance Act authorizes the commission to make this information available to its own employees “and such other persons as the commission deems advisable.”

Prime Minister Pearson caused some confusion by answering “certainly not” when Diefenbaker asked if the information would be used for income-tax purposes. What the prime minister meant, it turned out later, was that these social insurance cards do not, and will not, contain any information about income. They are solely designed to identify Canadians and to make sure that any communication from government to citizen reaches the right person. For this purpose the registry will be available to any department that needs it.

So far, practically nobody except Diefenbaker has objected to this. Schoolteachers protested at one stage because they thought, mistakenly, that they were being made eligible for unemployment insurance (which they don’t need) and liable for contributions to the fund; this wrong impression has been cleared up. Labor Minister Allan MacEachen has received

only one other letter of protest so far, from a woman who didn’t want to state her age; he pacified her by explaining the pension angle. Meanwhile, the number of Canadians who have registered for social security numbers is getting on for a million and a half. The commission hopes that by the end of June, all six and a half million of us will have signed up. 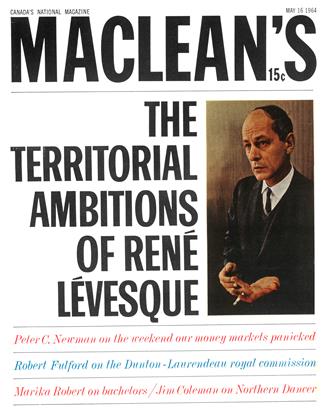