WHY does Premier Jean Lesage feel obliged to be much more ill-tempered in public than he is in private?

Of all the difficult questions left open after the federal-provincial conference in Quebec City, this one is perhaps the most disturbing. The normal custom at closed-door meetings is that blunt and occasionally rude words are exchanged within the walls of the conference room while a bland look of unity is put on for public appearances. Exactly the opposite happened in Quebec.

On the second evening of the three-day session Lesage was host to his fellow ministers of the crown at a dinner which by all accounts was magnificent. No officials were present, just cabinet members, and the atmosphere was one of warmest friendship. When Lesage came out, beaming with good-humored pride, he remarked to a friend, “You know, an evening like this, does more good than all our formal sessions put together.”

One of his guests was more realistic. "Such dinners are a little misleading,” he said. “Jean Lesage is such a good host, the atmosphere is so pleasant and congenial, and he himself says all the right things about being a Canadian and not just a Quebecker — it’s easy to let yourself think we really have no serious problems, none that can’t be dissolved in a bath of good will. We have to remind ourselves that none of us came here just as an individual. Lesage has all kinds of pressures working on him, and so have we, and the differences between us are very real.”

Less than twenty-four hours later his doubts were confirmed. Lesage held a separate press conference, issued a separate communique, and uttered comments on Ottawa’s policies that most newspapers headlined as “threats.” Nothing had happened at the conference itself to cause this change of tone. Federal and provincial delegates were unanimous on that point. The usual arguments went on, but in terms unusually mild, and Lesage’s own manner was described by one experienced official as “remarkably conciliatory — not nearly so harsh as Quebec’s published brief.”

One clue to the reason for Lesage’s harsher public face could be seen in the Laval University students’ march on the Legislature. The boys and girls were perfectly orderly — indeed their march was a model of self-discipline, and didn’t produce a single incident of violence or rowdyism. They even edited their own placards, tearing up the rudest of them and all those that were bluntly separatist, so what we saw in the square below the Legislature was a severely bowdlerized version of the students’ message. But even then it was rude enough, and startling in its bitterness against Lesage. Placard after placard denounced him as “Ottawa’s valet,” as “the Queen’s fool,” and in one case even as “Judas.”

THE IRON BEHIND POLITE WORDS

Obviously, Lesage felt that some demonstration of hostility toward Ottawa was a political necessity for the premier of Quebec. He tried to offset this with a special effort to be gracious and friendly in private. The strategy was only partly successful. “There has been a perceptible hardening of opinion against Quebec, in the conference,” a provincial delegate said. “It’s not expressed in harsh words — quite the contrary. The premiers are even more careful than usual to be polite and restrained in their language.

“But it’s finally sinking in that Quebec’s desires and demands at these meetings are wholly different from those of other provinces. The other premiers all want more money, of course, and they all ask Ottawa to give them more, but they don’t really expect to get all they’re asking and they don’t really mind not getting it. They all want the central government of Canada to be strong. They don’t want to weaken it.

“Quebec does. Quebec is fundamentally opposed to the idea of a strong central government, and that’s the principle underlying its policies. More and more, we are dividing on this big issue, and the division on the provincial level is nine against one.”

Among Quebec delegates, feelings of bewilderment and resentment accompany the sense of isolation.

“Actually, we are sticking closer to the British North America Act than anybody else,” said a Quebec civil servant indignantly. “We are not even asking for changes, we are asking only that the present constitution be observed. And for that, they call us separatists.”

What he didn’t realize, apparently, is that compared to other citizens of Canada practically all Quebeckers are separatist in their thinking — that the gap between the Quebec separatists and other French Canadians is scarcely wider than and, perhaps not even as wide as, the gap between Quebec and the rest of Canada. And if the Quebec City conference is an indication that latter gap is not narrowing but widening. The crisis of Confederation has not yet reached its climax. 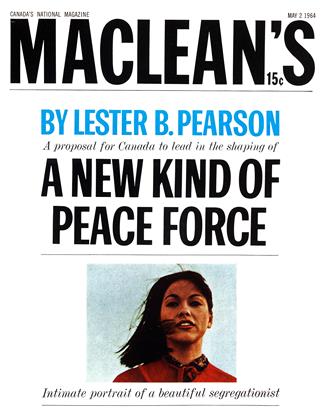