SINCE the Republicans can, for practical purposes, be written off in 1964, the big election question, the one that preoccupies Americans, is: who will be the Democratic vice-presidential nominee, and therefore the next vice-president? People ask this with a note of worry in their voices. The tragedy at Dallas last November 22 is still fresh in memory and it’s impossible to forget that of thirty-six presidents, four have been murdered and four have died in office of natural causes.

Two things heighten the anxiety about President. Lyndon B. Johnson’s life expectancy. First, he’s the most gregarious of presidents. The harassed Secret Service hasn’t managed to restrain his fondness for mixing with crowds. Out for a breath of air, he may saunter over to the wrought-iron fence around the White House grounds and shake hands with tourists standing on the other side. In a country where a ninth of the presidents have been shot, and assassination attempts have been made on several others, this is not safe. Secondly, while Johnson appears to be in perfect health, he works at a pace that would kill most men. And he did have a heart attack eight years ago.

So although the vice-presidency has frequently been tossed to inconsequential men who would have made ludicrous presidents, the feeling in the U. S. now is that henceforth the vice-president must be picked with care, deliberation and the historical knowledge that there is more than one chance in five that he will have to shoulder the presidency.

Johnson would designate Kennedy as his riming mate only if he thought Kennedy’s presence was essential to victory. He doesn’t. Bobby Kennedy’s prestige has slipped. He is reviled in the south, has acquired potent enemies in the north and has a reputation for ruthlessness.

That leaves three men in the contest for the Democratic vice-presidential nomination: Hubert Humphrey, Sargent Shriver and Robert McNamara. Each has a Johnson assignment calculated to focus national attention on him and test his qualities under fire.

Senator Humphrey, of Minnesota, has the complex chore of guiding the civil rights legislation through the Senate, where his most formidable adversaries include southern Democrats who are chairmen of some of the top committees and thus wield tremendous power. Humphrey went after the presidential nomination bravely but vainly in 1960; until lately, the betting was that he’d be Johnson’s running mate. But he, like Robert Kennedy, would hurt Johnson in the south. And he is disliked by business.

Vietnam will probably remain an unresolved issue for quite a while, but McNamara has impressive achievements to his credit. He gave up one of the fattest salaries in the U. S., as president of Ford Motor Company, to be defense secretary at twenty-five thousand dollars a year — a financial sacrifice that can’t easily be overlooked — and has literally saved the taxpayers billions of dollars with his industrial know-how, his brilliant executive talent, and his toughness in facing down the Pentagon.

McNamara has been the ablest member of the cabinet. He and Johnson understand and like each other. But McNamara is without political experience, and being the chief executive of a giant corporation doesn’t necessarily fit him to be chief executive of the nation. Herbert Hoover, the business and engineering whiz, was a pathetic presidential flop, whose inadequacies can by no means all be blamed on the depression. McNamara has a further handicap — he’s a former Republican who has never registered as a Democrat. The party faithful

would seriously resent it if he were selected.

Sargent Shriver, initially, was no more than President Kennedy’s brother-in-law — a nice, amiable, handsome young man, sincere, earnest, energetic. But there are Democrats who recall that when Richard Nixon seemed to be ahead in the 1960 campaign, it was Shriver who persuaded John Kennedy to telephone Mrs. Martin Luther King when her husband, the Negro leader, was jailed. This gesture of sympathy and encouragement gained Kennedy a flood of Negro votes — the votes which, Dwight Eisenhower said later, enabled Kennedy to defeat Nixon in their amazingly close contest.

Shriver in 1961 was handed the job of organizing and directing the Peace Corps, which could have been a farce but has, instead, been universally applauded and as little criticized by Republicans as by Democrats. He directed the Peace Corps so successfully for three years that Johnson passed him the vital and intricate mission of directing the administration’s “war on poverty,” which is one of the principal programs Johnson is banking on to bring him a whopping majority in November. And, suddenly, Shriver is a towering figure, whose advice everybody seeks and respects.

SHRIVER: THE KENNEDY RELATIVE EVERYONE LOVES

His business training is not negligible: he has a law degree from Yale and for years was assistant general manager of old Joe Kennedy’s mammoth Merchandise Mart in Chicago. His political training has not been negligible either. Before he was identified with John Kennedy’s march to the White House, he was president of the Chicago Board of Education, coping with problems of race and poverty. He was also chairman of Chicago’s Catholic Inter-racial Council.

As Peace Corps boss, he’s a sort of hero in his own right and there are Americans who maintain that he has done more for America’s foreign relations than the state department and the Alliance for Progress combined. Idealistic American youths admire him; he’s immensely popular with Negroes, labor, liberals; business is not antagonistic to him — far from it; and he’s popular with Congress, where, of all people, crusty Barry Goldwater, the reactionary of reactionaries, professes admiration for him. And at this writing, he’s the leading contender in the race for the vice-presidency of the United States. 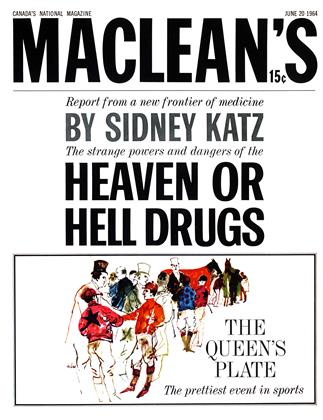