KEEPING CANADIAN YOUNGSTERS in School iS a national obsession these days and, consequently, teachers are enduring a pretty stiff beating about the head and ears for failing to solve the dropout problem. Recently, a woman who signed her letter Mother of Five wrote that impatient, sadistic teachers are driving teenagers out of school instead of taking the trouble to persuade them to learn. At the same time, a university professor pontificated, in language more temperate but less lucid than Mother of Five’s, that “schools must be prepared to devote the time and effort necessary to communicate significant content to the potential dropouts.” Mothers, professors, politicians, psychologists and a great many others who’ve never stood up before a roomful of teenagers are all lamenting The Great Dropout Problem.

Quite rightly, they are alarmed at the diminishing number of jobs for the under-educated, and at the spectre of Soviet schools that seem to churn out super-scientists while we produce an appalling number of misfits. Quite wrongly, they blame the dropout problem exclusively on the schools. To me, and to many other teachers who know potential dropouts, this criticism is mostly piffle. Moreover, it’s doing unspeakable harm because it misleads the public, which is coming to expect the impossible from its schools. 1 claim that the time has arrived for placing the responsibility for dropouts where it belongs; not on the teacher, but squarely on the dropout himself. To convince the incorrigibly lazy student that he's

Mr. Irving is on the teaching staff of the Camrose, Alberta, Composite High School.

wrong we must drop the consequences of his irresponsibility in his own lap. He must go. Some dropouts should drop out.

I’m not talking about students who drop out because their families must have their wages. Nor, for the moment, am I discussing those students who finally and honestly realize that they’ve reached the limit of their ability to absorb classroom learning. My concern is those students who can learn but, for a variety of unappealing reasons, refuse to try. They are known in educational jargon as “underachievers” but I prefer shorter, sharper terms, like laggard or shirker.

The typical under-achiever is on the verge of quitting school after a few' months of grade ten. Up to grade six he had average or better marks but he had also developed some ominous habits; he was talkative, resentful and careless of other people’s property. His parents were unable or unwilling to set study hours for him, keep him off the streets at night, or teach him about respect or obedience. After grade six his marks began to slide and he piled up a record of more serious offences — malicious mischief, drinking, truancy, insolence, disruption of classes, ordinary bone laziness. By now, in grade ten, he shows obvious contempt for authority and for his more serious-minded fellow students. His single apparent interest is racing around the streets after dark in a noisy car in company with three other “underachievers.”

Boys like these are widely represented as victims of malignant forces that somehow conspire to rob them of their educational birthright. Their defenders have been prompt to blame teachers for not putting the needed time and effort into penetrating their impervious skulls — referring to time and effort as though these commodities exist in limitless quantities within the school. Well, they don't. There are limits to what even a good teacher can do and do well. He and his school must direct their resources to the areas where they'll do the most good for the most students. He cannot squander ten times the effort and time needed by the majority in order to squeeze a few extra tatters of knowledge into the unreceptive, unretentive and often antagonistic mind of the laggard.

LEARNING ABOUT WORK THE HARD WAY

Wouldn't it be better to let the underachiever drop out and get — or try to get — a job in the competitive world? That at least might acquaint him with some of the responsibilities he has evaded so far. As one U. S. educator puts it: “Let the dropout drop out as early as possible, so that he can learn the hard way the disadvantages of under-education while he is still young enough to return to school without being incongruously older than his classmates.”

Certainly, all the clamour to give the shirker special treatment doesn't have the effect of arousing a sense of responsibility in the delinquents themselves. My experience has been that it teaches ninety-eight percent of them only one thing: that the squeaking wheel gets the grease. It suggests to the laggard's knotted-up little intellect that to get somewhere he need not be productive, competent, reliable or upright; he need only be a first-class stinker.

But supposing we do let him drop out. What then? First, I think we should place dropouts who are under nineteen within the jurisdiction of the National Employment Service, making them available for compulsory employment anywhere in the country. The only door out of this situation would be the door back into the school. And it should be clearly explained to dropouts that the schools are ready and eager to welcome them back — when they show a desire to learn.

I propose substantially increased federal grants to such organizations as the Canadian Education Association for research in ways to reinspire potential dropouts; and adequate grants to schools that are prepared to apply the findings of such research.

The laggard, of course, is not the only kind of school dropout. There are some who are both bright and ambitious but must quit school to get the wages their families need to maintain a decent standard of living. The federal government’s recent extension of the family allowance to parents of students who stay in school till they’re eighteen will go some way toward salvaging such students. But unfortunately it may also clutter up the schools with yet a third category of potential dropouts — those with an honest limit to their ability to absorb advanced education.

NOT EVERY JOB NEEDS A DIPLOMA

The arguments for keeping dropouts in school are almost always based on the indisputable fact that most jobless people are jobless because they’re under-educated. But these arguments usually go on to adopt the premise that keeping potential dropouts in school will eventually bring them up to par, and in a great many cases this is nonsense. We could keep low-ability students in school till they die of old age and still not make them competitive in highly skilled jobs. Instead of trying to force learning upon those who cannot learn, we should exploit the fact that even in this technological age there are still a great many unskilled and semi-skilled jobs to be done — jobs that can be done well, and contentedly, by people who can’t manage to graduate from high school.

What strikes a high-school graduate as dull and hardly worth doing at all, let alone doing well, may offer satisfying challenge to a boy who’s accustomed to think in terms of things rather than ideas. The same applies to girls.

I suggest a federally sponsored campaign to convince business and industry that people of moderate scholastic ability are good at many jobs, and that it is wasteful and ridiculous to expect high-school graduates for every function in the plant. This notion has already plugged up the unskilled fields with over-qualified people, leaving without jobs people who could do the work equally well, and creating a famine of highly skilled technicians at the other end of the occupational scale.

Canadian schools will no doubt continue to make every possible effort to spot the distant early warning signs of dropout-proneness, and to direct students exhibiting such signs into courses they can handle. But when students have reached their saturation point, an aware, rationally organized society should be ready to take over. In the meantime, it will be profitable to remember that it is not only unjust, but appallingly wasteful of human effort and of public facilities to force schools and teachers to keep an uneducable, often rebellious, wouldbe dropout population in indefinite, fruitless custody. 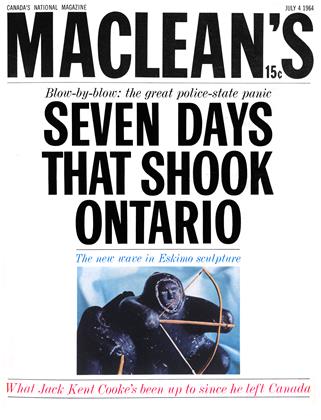