THE SUMMER SEASON has brought few entertainment spectacles of more enduring value than the brief visit of Governor George Wallace to Canada. Admittedly, the governor of Alabama may appear entertaining only to people with very special tastes in humor, but at the same time the experience of watching him at close range can be richly educational. As the leading American racist in a time when race is the leading American issue, Wallace is a statesman of considerable importance. He is also interesting, and what is interesting about him is not his viewpoint, which is banal, but his style. He is not at all the sort of southern American bigot we have been brought up to deplore. He’s something quite new — not a fire - breathing, blood - stirring evangelist but a cool, efficient, thoughtful - sounding executive; to listen to him is to have at least the momentary illusion of rational discourse.

He was elected governor only two years ago. but already he has made himself this generation’s most effective advocate of racial segregation. He is supposed to have said, after losing his first attempt to become governor in 1958, “They just out - segged me. They're never going to do that again.’’ The possibility now' seems unlikely. Wallace has done more than try to bar Negro students from the University of Alabama and from white public schools. He has taken his segregationist campaign far beyond Alabama and now he is running for president of the United States on a platform that consists largely of opposition to the federal civil rights law. Wallace has no chance of becoming president, but he believes he can secure enough elec-

toral votes in November to stalemate the election; then he will force one of the major candidates to adopt his program in order to win his support. In the spring he entered three primaries outside the solid South and demonstrated that many non-southerners are ready to vote against the civil rights bill. He received forty-two percent of the primary votes in Maryland, thirty-four percent in Wisconsin, and twenty-nine percent in Indiana.

He came to Canada to speak to an enormous convention held in Toronto by Lions International. He arrived with his state government guards in a private plane early one evening, gave a long press conference the next morning, spoke to the Lions at Maple Leaf Gardens just before noon, and went back to Alabama after lunch. Some Toronto people resented his visit — hundreds of picketers circled the Gardens carrying anti - Wallace placards during his speech — but I was grateful to the Lions for bringing him here.

RACISM FLOURISHES. NEXT DOOR TO THE SPACE AGE

I had wanted to meet him since I visited Alabama a month before. At that time — I was there just about as long as Wallace was in Toronto — I saw a little of the northern section of the state. I was impressed, as so many visitors to the South are, by the difference betw een my own literature - fed image of the country and the current reality. Northern Alabama, helped by cheap TVA power and federal defense money, has a convincing air of prosperity. It may have signs reading “Save Our Republic, Impeach Earl Warren,” but it also has air-conditioning, a Holiday Inn, big new office buildings, ranch - style houses, and an enormous rocket - development site. Through television and cheap travel, northern Alabama is, obviously, in close touch with the rest of the country; through defense installations it’s in close touch with those forces of science and education that are reshaping North America. In this environment, can the people of Alabama maintain the racial and cultural attitudes of, say, the 1930s? Is it possible to practice racial segregation, is it possible to maintain a flourishing Klu Klux Klan, when Werner von Braun works just down the road? The answer, apparently, is yes. Alabama whites are as convinced of the need for segregation as they were a generation ago, and they hold this conviction even more firmly than in the past just because it has been so powerfully challenged.

The style of George Wallace suggests how this conviction is kept strong. Wallace is a demagogue of the television age, a low-key, relaxed, friendly demagogue. At his press conference this was immediately evident in his automatic respect for the cameras. In the

statehouse at Montgomery he may be king, but when the television men told him to wait another three minutes before starting his press conference he waited. When they finally got their equipment set up he tested the mike for them: “Okay, how’s this, this okay?”

The questions from the Toronto reporters revealed one degree or another of hostility, but Wallace answered them with an ease that amounted almost to charm. He especially enjoyed turning Canadian questions back onto Canadian problems. “There hasn’t been any voluntary integration in Alabama as there hasn't been any voluntary integration of Indians in Canada. There is some hypocrisy among the press here. Before you criticize us you should clean up your own backyard. If you’ve got any moral crusade to run, you can run it in your own country.” He referred — again, in the most friendly way — to Canada's antiNegro immigration policies. He had been briefed, but not perfectly: one answer he gave seemed to indicate that he believed Canadians forced Indians to stay on reserves.

WHAT WALLACE WANTS FOR "THE OPPOSITE RACE"

He insisted that he had nothing against Negroes — he wanted to educate them (separately), wanted them to vote, wanted to help support their farms, wanted them to have the best possible health and welfare measures. He spoke of them not as “Nigras” but as “Negroes,” but several times he used a curious phrase: “the opposite race.” His phrasing was educated in most instances — he is a lawyer — and even fancy: “I was raised among members of the opposite race. That was my environment, and you do not dislike your environment.” Again and again he brought his answers back to the constitutional rights of the states. In the gentlest way possible he explained, over and over, that he was only trying to protect the rights of states and municipalities to solve their own problems in their ow'n way. At times he spoke in the manner of a political science professor lecturing to a notvery-bright freshman class.

An hour later, standing before twelve thousand Lions at Maple Leaf Gardens, he was less casual, more earnest. In his dark-blue suit and his striped tie and his solemn, dedicated expression, he was not a local dictator but an earnest, single - minded lawyer pleading his case before an understanding judge. As governor, Wallace has followed a pattern that may well win him a position in Alabama similar to that of Huey Long in Louisiana a generation ago: he has begun to use the civil

service as a political arm (dozens of highways - department men followed him out of the state to campaign in the primaries): he has increased the size of the state police: he has played on the most profound fears of his voters. But speaking to the relaxed, sincere Lions he suggested not power but innocent dedication. He announced that his topic was "Trends in Government and the Philosophy of Government” and he used words like “oligarch” and “concept.” He said "we are not racists" but merely defenders of liberty.

A few minutes earlier the ex - public relations man for the astronauts, Colonel John Powers, had described how Americans w'ould soon reach the moon; just after, some Pennsylvania Lions had presented a mobile eye clinic to a dark-skinned doctor from India. In this context the ranting of an old - fashioned Bilbo - style segregationist would have been ludicrous. But the Wallace style, conveying basically the same message, was entirely acceptable. The Lions, northerners and southerners, stood up to applaud him when he entered and when he finished. Neither time could I, scanning the audience, discover anyone who was not applauding. They interrupted him with applause four times. He was, obviously, one of them. Listening to his articulate phrasing, watching his restrained gestures, 1 wondered if the future would produce still more literate and educated racists — racists who could, say, make jokes like Adlai Stevenson or quote Frost like John Kennedy. The 1930s produced racists who came before the world as illiterate imitations of their rednecked voters: it took the 1960s to produce a racist who presents himself as a political philosopher. 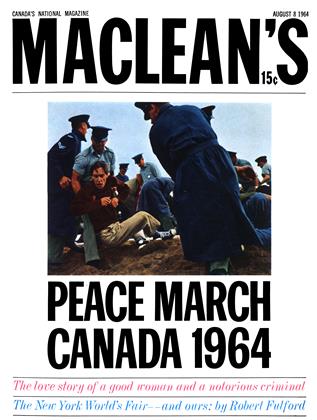