The fall and rise of the female swimsuit

THE INGREDIENTS for the nicest fantasy of all the nice fantasies that Playboy magazine has conjured up for red-blooded North American men are a stretch of secluded beach; some gently rolling breakers; a picnic hamper filled with corn on the cob, lobster and shoestring potatoes; a cosy fire; chilled Chablis; and buxom girls wearing bikinis, or no bathing suits at all. This fantasy is called a “beach bash.” No ordinary man, in the ten summers that Playboy has been photographing beach bashes, has actually participated in one, but for a few weeks this summer a California fashion designer named Rudi Gernreich promised to supply the one elusive ingredient that might have turned every beach in North America into beach-bash country. Gernreich is the man who thought up topless bathing suits.

Gernreich has confessed that his design was largely a joke, and most Playboy readers know, in their heart of hearts, that they’ll never actually witness a beach bash, or even see a topless-suited girl. But, despite these harsh truths, enough revealing events followed Gernreich’s unveiling last June to bring the beach fantasy a little closer to real life.

A ladies’ shop on Granville Street in Vancouver reported in mid-June that sales of topless suits were “small but definitely measurable.” Marion Hodgkinson, twenty-six and 39-29 >/2-40, walked through the streets of London to her beauty parlor wearing a topless dress. Mamie van Doren had her picture taken in a cunning little leopardskin number. Chandler’s Ladies Wear in Toronto received sixteen orders for topless suits and dresses in one day in June, and a Chandler’s sales clerk, mildly disguised in a wig and dark glasses, modeled a suit for fashion columnists and other interested newspapermen. Two Canadian men reported that they had actually spotted girls wearing the topless suits near water. A sunbather named Joseph Osborn made his observation on a beach outside Hamilton, Ontario; he summoned the police after he’d given the girl ninety minutes to cover herself. Raymond White, who owns the shop on Granville Street in Vancouver, observed two of his shop s suits beside a private pool in West Vancouver, the suits' wearers, he said, were “very good sports.”

ed Minoan culture, 3,500 years ago, topless gowns were considered quite all right, in fact very haute couture — brought a complex flood of emotions, hopes, and wishful thinking boiling to the surface of the civilized world. Playboy readers, normal men, women, and husbands of topless-garment wearers were swept up in a tide of emotion. Topless suits were hula hoops with sex; no one in the countries of the Western world could avoid a response to their existence. Very few resisted the opportunity:

■ The worst thing for church people to do is adopt an attitude of being shocked. — The Archbishop of Canterbury.

■ They’ll be worn by the sophisticated woman who knows how to behave, the lady who is well-read and cultivated.—Harry Pollock, public relations adviser to a Toronto manufacturer of women’s wear.

■ MARTINI WITH PEEL — Headline in the New York Daily News reporting the arrest of a waitress serving drinks in a topless suit.

■ They have brought closer the day when we will no longer have to fight for the right to go naked in a public place. — Edith Church, secretary of the National Nudist Council.

■ Barbie won’t wear them. We put her in healthy play situations. — Mrs. Elliot Handler, inventor of the Barbie doll.

■ This is a release for women after years of frustration. — Husband of the first woman to buy a topless suit in England.

• I guess they'll be used for intimate entertaining. — Leonard Zelsman, manager of a fashion shop in Toronto.

■ 1 design for women who want to be stimulated into their own patterns of thought. — Rudi Gernreich.

■ Few women can bare it. — Mme Raymond Bousquet, wife of the French ambassador to Canada.

■ Everyone who, without lawful excuse, is nude and exposed to public view while on private property is guilty of an offense. "Nude" means offending against public decency or order. — Toronto police morality officer, reciting Section 159 of the Canadian Criminal Code.

SINCE MID-JULY the sales of topless suits have declined — and so has the quality of the jokes about the suits. Chandler’s in Toronto no longer has any topless clothes in stock and in Vancouver the chilly summer has killed the sales of bathing suits with or without tops. In Montreal a municipal ordinance outlaws pants that bare women’s legs below the thigh; the ordinance doesn’t admit the existence of clothes that bare women’s breasts. Press stories about topless-suit wearers still appear occasionally but they have a vaguely fraudulent air.

CAN THIS BE THE END?

When Emilio Pucci, the Italian designer whose casual remark about streamlining the bikini inspired Gernreich’s topless suit, displayed his beach fashions late in July, he avoided the nude look in favor of hoods, burnooses and coveralls. It was just in time. “We are sealing up our shipment of topless suits,” Melvin Dawley, the president of Lord & Taylor in Manhattan, said a few weeks ago, in a variation of let-them-eat-cake, “and shipping them to the poor.” From the squalid, it was a short step to the tragic. Paquita Rodriguez of Lima, the first girl to wear a topless suit in Peru, said, “Since I wore the suit my life has become impossible,” and died from an overdose of sleeping pills. It was time again for harmless pastimes — like fantasies about beach bashes. 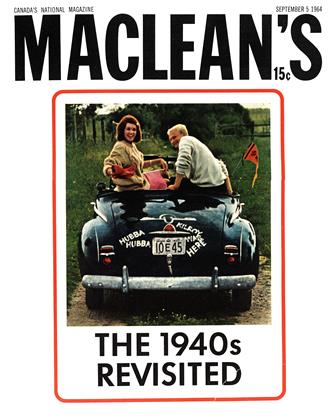